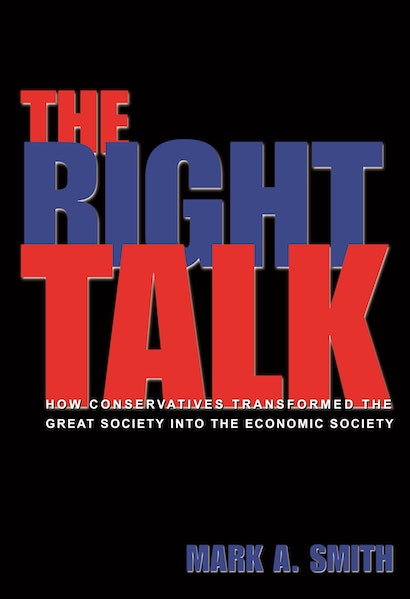 Political analyst Mark Smith offers the most original and compelling explanation yet of why America has swung to the right in recent decades. How did the GOP transform itself from a party outgunned and outmaneuvered into one that defines the nation’s most important policy choices?

Conventional wisdom attributes the Republican resurgence to a political bait and switch — the notion that conservatives win elections on social issues like abortion and religious expression, but once in office implement far-reaching policies on the economic issues downplayed during campaigns. Smith illuminates instead the eye-opening reality that economic matters have become more central, not less, to campaigns and the public agenda. He analyzes a half century of speeches, campaign advertisements, party platforms, and intellectual writings, systematically showing how Republican politicians and conservative intellectuals increasingly gave economic justifications for policies they once defended through appeals to freedom. He explains how Democrats similarly conceived economic justifications for their own policies, but unlike Republicans they changed positions on issues rather than simply offering new arguments and thus helped push the national discourse inexorably to the right.

The Right Talk brings clarity, reason, and hard-nosed evidence to a contentious subject. Certain to enrich the debate about the conservative ascendancy in America, this book will provoke discussions and reactions for years to come.

Mark A. Smith is Associate Professor of Political Science and Adjunct Professor of Communication at the University of Washington. He is the author of American Business and Political Power: Public Opinion, Elections, and Democracy.

"The Right Talk explains how conservatives reshaped American politics by seizing the political advantage on economic growth and security. The book reveals that the conservative movement reframed rather than changed its traditional policy goals, emphasizing lower taxes and smaller government as the path to prosperity rather than as a guarantor of freedom. In the wake of growing economic insecurity since 1970, through organization and skilled rhetoric, conservative Republicans successfully cast Democrats as the dreary party of 'fiscal responsibility.' This is a fascinating, complex, clearly written study that creatively interlaces data and penetrating analytical insights to show the continued importance of economics to voters. The Right Talk marks a significant advance in our understanding of American political communication and party politics."—Robert M. Entman, George Washington University

"Mark Smith has taken up William Riker's intriguing but ignored challenge to understand political change through rhetorical analysis. The result is a fine book that should appeal to readers of all political persuasions. He shows that Republicans, more than Democrats, better adapted their appeals to changed economic circumstances, thereby attaining political dominance. That success, however, came at a price: economic growth, not liberty, became the core of Republican appeals to the electorate. Democrats will find in these pages evidence to understand their difficulties and, perhaps, to inform their revival. For everyone, Smith offers a remarkably dispassionate and engrossing guide to the politics we have experienced over two generations."—John Samples, Cato Institute

"This book takes the study of American politics out of its self-enforced rationalist ghetto and makes connections with other parts of political science and even political sociology. It does so by taking on the account of the chattering classes that if it weren't for God, guns, and gays, the GOP wouldn't stand a chance. Smith shows this to be an unsustainable argument."—Mark Blyth, Johns Hopkins University

"Mark Smith offers a new account of why Democrats are having such trouble in American elections. Republicans are winning not despite the economy but largely because of the economy, or at least because of how they frame their rhetoric and arguments around the economy. Smith makes this point and supports it with a careful assessment of the evidence. This book will provoke important discussions—and will be indispensable for future scholars."—Andrew Rich, author of Think Tanks, Public Policy, and the Politics of Expertise