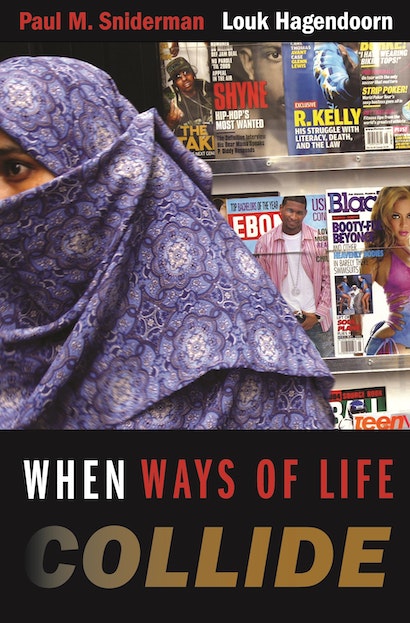 In 2004, Dutch filmmaker Theo van Gogh was brutally murdered on a busy Amsterdam street. His killer was Mohammed Bouyeri, a twenty-six-year-old Dutch Moroccan offended by van Gogh’s controversial film about Muslim suppression of women. The Dutch government had funded separate schools, housing projects, broadcast media, and community organizations for Muslim immigrants, all under the umbrella of multiculturalism. But the reality of terrorism and radicalization of Muslim immigrants has shattered that dream.


In this arresting book, Paul Sniderman and Louk Hagendoorn demonstrate that there are deep conflicts of values in the Netherlands. In the eyes of the Dutch, for example, Muslims oppress women, treating them as inferior to men. In the eyes of Muslim immigrants, Western Europeans deny women the respect they deserve. Western Europe has become a cultural conflict zone. Two ways of life are colliding.


Sniderman and Hagendoorn show how identity politics contributed to this crisis. The very policies meant to persuade majority and minority that they are part of the same society strengthened their view that they belong to different societies. At the deepest level, the authors’ findings suggest, the issue that government and citizens need to be concerned about is not a conflict of values but a clash of fundamental loyalties.

"The authors of When Ways of Life Collide deem the Dutch multicultural experiment to be a grand and unequivocal failure. In their view, multiculturalism and liberal democracy are fundamentally incompatible. Their argument is a relatively simple one: By encouraging 'difference' among ethnic subgroups, multiculturalism ends up turning these groups into targets of resentment and thereby insuring their rejection by the majority culture."—Richard Wolin, The Nation

"Sniderman and Hagendoorn expertly describe how, beginning in the 1980s, elite politicians and academics in the Netherlands advocated for an extreme form of accommodation for Dutch immigrants."—T.D. Boswell, Choice

"When Ways of Life Collide is a provocative, yet empirical assessment of intrinsic, yet nebulous multiculturalism in today's society."—David Marx, David Marx.co.uk

"When Ways of Life Collide is a clever book that offers insight into the attitudinal mechanics of prejudice. These are important issues with high political salience that should interest students of the Netherlands and many other countries around the world."—Rahsaan Maxwell, Review of Middle East Studies

"This thought-provoking book provides many interesting insights into the relationships between a culture's values, prejudice, perceived cultural and economic threats, and exclusionary reactions against immigrants, derived from the analysis of a skillfully designed survey. It is relevant to a wide audience concerned with attitudes towards immigrant minorities, immigration, and multiculturalism, as well as to those interested in innovations in survey design."—Eline A. de Rooij, European Sociological Review

"Sniderman and Hagendoorn have provided a nuanced portrait of some of the major tensions of our time—the conflicts between diversity and loyalty, identity versus tolerance. This research goes far beyond the Netherlands in its implications, demonstrating how, in an attempt to honor differences, we may exacerbate them."—Diana Mutz, University of Pennsylvania

"This is the best empirical examination of multiculturalism I have ever read. This book demonstrates that attitudes toward immigrants and immigration are complex, grounded in values that are different between majority and minority communities, and connected to the desire of the Dutch to protect their identity as liberal, tolerant, and committed to multiculturalism. No empirical analysis of multiculturalism of this scale has ever been conducted, in Europe or elsewhere. This is a highly original attack on a problem of the utmost importance."—James L. Gibson, coauthor of Overcoming Intolerance in South Africa

"This is a book about the policies of multiculturalism, using the Dutch case as an example of the problems they can give rise to, especially with the Muslim minority. The main argument is that policies that were designed to protect the distinct way of life of the Muslims and promote tolerance are paradoxically breeding intolerance on both sides. This is an excellent and provocative book, on a very topical issue, that goes against the dominant frames of interpretation of multiculturalism and prejudice in social sciences."—Nonna Mayer, coeditor of Extreme Right Activists in Europe