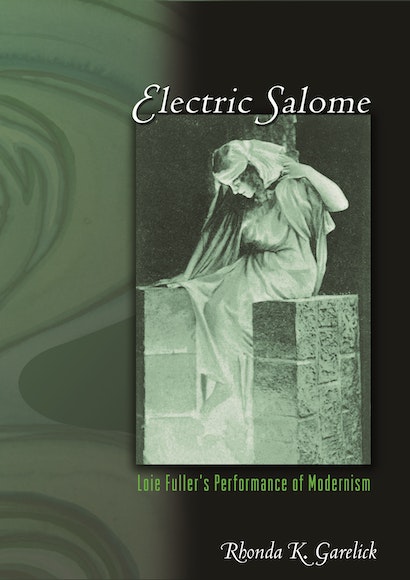 Loie Fuller was the most famous American in Europe throughout the late nineteenth and early twentieth centuries. Rising from a small-time vaudeville career in the States, she attained international celebrity as a dancer, inventor, impresario, and one of the first women filmmakers in the world. Fuller befriended royalty and inspired artists such as Mallarmé, Toulouse-Lautrec, Rodin, Sarah Bernhardt, and Isadora Duncan. Today, though, she is remembered mainly as an untutored “pioneer” of modern dance and stage technology, the “electricity fairy” who created a sensation onstage whirling under colored spotlights. But in Rhonda Garelick’s Electric Salome, Fuller finally receives her due as a major artist whose work helped lay a foundation for all modernist performance to come. The book demonstrates that Fuller was not a mere entertainer or precursor, but an artist of great psychological, emotional, and sexual expressiveness whose work illuminates the centrality of dance to modernism.

Electric Salome places Fuller in the context of classical and modern ballet, Art Nouveau, Orientalism, surrealism, the birth of cinema, American modern dance, and European drama. It offers detailed close readings of texts and performances, situated within broader historical, cultural, and theoretical frameworks. Accessibly written, the book also recounts the human story of how an obscure, uneducated woman from the dustbowl of the American Midwest moved to Paris, became a star, and lived openly for decades as a lesbian.

Rhonda K. Garelick is professor in the department of English and at the Hixson-Lied School of Fine and Performing Arts at the University of Nebraska-Lincoln. She is the author of Rising Star: Dandyism, Gender, and Performance in the Fin-de-Siècle (Princeton).

"Garelick's lucid, engrossing study . . . unwraps the contradictions that have kept Fuller as veiled from modern audiences as she was from those at the Folies-Bergere."—Andrea Walker, Times Literary Supplement

"A most welcome 'finding' of a dancer never lost, Electric Salome offers a remarkably smart reading of Fuller's contribution to dance history, one that makes clear the importance of that contribution to modernism broadly construed."—Catherine Gunther Kodat, Modernism Modernity

"In her mesmerizing dances, swirling huge skirts under colored lights of her own design, Fuller paved the way for new visual effects in theater. [I]n Electric Salome Rhonda Garelick attempts to reposition Fuller as a central player in the multiple histories of ballet, modern dance, theater, visual art and postmodern performance. The best part of Electric Salome is how Garelick puts Fuller's story into a context that we can appreciate."—Matthew Hunter Griffin, Time Out Chicago

"Rhonda Garelick's Electric Salome...argues for Fuller's relevance beyond her status as modern dance 'pioneer' and traces the way in which her work was modernist in its own right. Garelick's book spirals out, teasing out connections with Fuller to broader movements of colonialism, as well as Romantic Ballet and Modernist Drama. [Electric Salome offers] significant advances to Loie Fuller scholarship [and argues] persuasively for the importance of Fuller's legacy."—Judy Sperling, Dance Films Association Review

"Electric Salome is suitable for a wide range of readership. . . . Garelick writes theory with the minimum of jargon; the book is academic and sophisticated, but accessible throughout. It contains almost fifty illustrations, including posters, photographs and patent drawings."—Stephen Herbert, Early Popular Visual Culture

"One of the best aspects of Rhonda K. Garelick's book is that it enables a virtual re-enactment of Fuller's performance of modernity: in the end, the initial butterfly/illusion shimmers and stays for good in the reader's mind."—Virginie Pouzet-Duzer, Oscholars

"Both Ann Cooper Albright's and Rhonda Garelick's books are important contributions to a female artist, whose place on the agenda of French modernism is now less refutable than ever. Both authors have done much to shed further light on the sometimes counter intuitive complexity of this modernism. While both Traces of Light and Electric Salome deserve to be considered in their own right, they open an even more fascinating kaleidoscopic panorama when read in tandem."—Lucia Ruprecht, H-France

"This well-illustrated and probing book is an important contribution to the scholarship on Loie Fuller and, with its contemporary resonances, should prove of interest to practitioners and academics in the fields of live-art and site-specific performance as well as dance."—Libby Worth, Modern Drama

"Fuller's work demands that its scholars cover a lot of ground, and I was delighted to learn so much from Garelick's study about a widely ignored pioneer of avant-garde and modernist theatre performance and dance."—Mike Sell, Theatre Research International

"In Electric Salome, Rhonda Garelick persuasively makes the case that Loie Fuller was central to the transition to modernism in politics, theater, modern dance, and neoclassical ballet. In elegant, often witty, always evocative prose, Garelick shows that Fuller's relative obscurity is the consequence not of her lack of originality, but of a role so strange and so individual that it has resisted the fluid narratives of social and artistic history. This brilliant book will correct those impoverished records."—Andrew Solomon, winner of the National Book Award and author of The Noonday Demon: An Atlas of Depression

"Garelick's extraordinarily astute analysis of Loie Fuller, surely one of the richest performers of her age, draws on insights from postcolonial theory, psychoanalysis, feminism, the history of science, queer studies, as well as the history of modern drama and dance, to unveil a Fuller we have never seen before. Electric Salome is a great read and a wonderfully layered contribution to dance and performance studies."—Peggy Phelan, Stanford University

"Garelick's splendidly detailed rendition of the odd triumphs and legacy of Loie Fuller and her technologized body is as electric as were La Loie's performances: here are lots of hands clapping for this performance also."—Mary Ann Caws, author of The Eye in the Text and The Surrealist Look