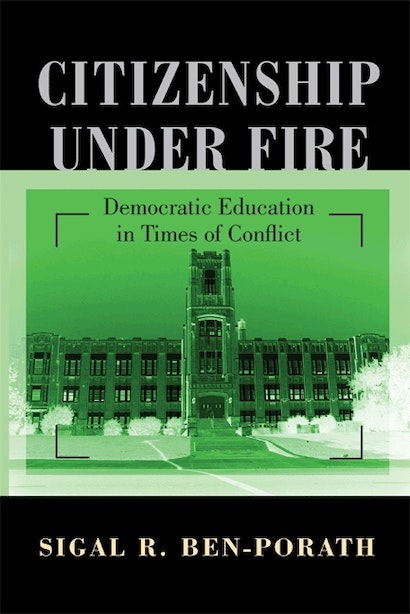 Citizenship under Fire examines the relationship among civic education, the culture of war, and the quest for peace. Drawing on examples from Israel and the United States, Sigal Ben-Porath seeks to understand how ideas about citizenship change when a country is at war, and what educators can do to prevent some of the most harmful of these changes.


Perhaps the most worrisome one, Ben-Porath contends, is a growing emphasis in schools and elsewhere on social conformity, on tendentious teaching of history, and on drawing stark distinctions between them and us. As she writes, “The varying characteristics of citizenship in times of war and peace add up to a distinction between belligerent citizenship, which is typical of democracies in wartime, and the liberal democratic citizenship that is characteristic of more peaceful democracies.”


Ben-Porath examines how various theories of education — principally peace education, feminist education, and multicultural education — speak to the distinctive challenges of wartime. She argues that none of these theories are satisfactory on their own theoretical terms or would translate easily into practice. In the final chapter, she lays out her own alternative theory — “expansive education” — which she believes holds out more promise of widening the circles of participation in schools, extending the scope of permissible debate, and diversifying the questions asked about the opinions voiced.

Sigal Ben-Porath is assistant professor at the Graduate School of Education and special assistant to the president at the University of Pennsylvania. She previously was a postdoctoral fellow at the University Center for Human Values, Princeton University. She earned her doctoral degree in political philosophy from Tel Aviv University in 2000.

"Sigal Ben-Porath examines the relationship among civics education, war and a quest for peace. She draws on examples from Israel and the US to understand how ideas about citizenship change when a country is at war, and what educators can do to prevent some of what she regards as the more harmful of these changes."—Talya Halkin, The Jerusalem Post

"The topic of this timely and important book is the challenge to democratic commitments and civic education posed by long-term conflict . . . . Ben-Porath is sensitive to the constraints imposed by public sponsorship of schools, and she has endeavored to find a balance between patriotism and the protection of civil liberties and minority rights. In adopting this stance, she has developed a position that should be acceptable to anyone in a position of authority who can be brought to acknowledge the peril to democracy inherent in protracted conflict."—Randall Curren, Muna Golmohamad, Theory and Research in Education

"With Deweyan insight, Sigal Ben-Porath's timely book focuses on the critical challenge of 'democratic education in times of crisis.' . . . [It] should be read and discussed widely and will significantly impact the way many of us think about the democratic purposes and possibilities of civic education for the twenty-first century."—Elizabeth Beaumont, Review of Higher Education

"This is an important book. It reminds readers that peace is the ultimate goal in times of conflict and that schooling plays a vital role in achieving peace."—Choice

"This timely book addresses a host of pressing issues, from teaching history and civics to accommodating diversity and dissent. Combining insights from feminist thought, multicultural theory, and democratic education, Ben-Porath offers an admirably balanced and insightful account of the complex demands that democracies face in time of war."—Amy Gutmann, University of Pennsylvania

"This book has all the ingredients of a classic text: it opens a new line of scholarly inquiry that, afterwards, seems hard to believe hadn't been opened before. Ben-Porath's main theme—civic education during wartime—has never been addressed in as comprehensive and inventive a manner."—Rob Reich, Stanford University

"Engaging and original. This book deals with important themes in a way that engages with a wide range of literature and literatures. The topic is timely and what the author has to say about it is important."—Harry Brighouse, University of Wisconsin, Madison