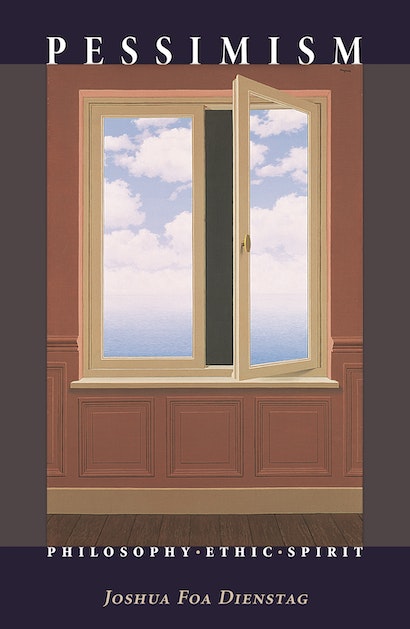 Pessimism claims an impressive following — from Rousseau, Schopenhauer, and Nietzsche, to Freud, Camus, and Foucault. Yet “pessimist” remains a term of abuse — an accusation of a bad attitude — or the diagnosis of an unhappy psychological state. Pessimism is thought of as an exclusively negative stance that inevitably leads to resignation or despair. Even when pessimism looks like utter truth, we are told that it makes the worst of a bad situation. Bad for the individual, worse for the species — who would actually counsel pessimism?


Joshua Foa Dienstag does. In Pessimism, he challenges the received wisdom about pessimism, arguing that there is an unrecognized yet coherent and vibrant pessimistic philosophical tradition. More than that, he argues that pessimistic thought may provide a critically needed alternative to the increasingly untenable progressivist ideas that have dominated thinking about politics throughout the modern period. Laying out powerful grounds for pessimism’s claim that progress is not an enduring feature of human history, Dienstag argues that political theory must begin from this predicament. He persuasively shows that pessimism has been — and can again be — an energizing and even liberating philosophy, an ethic of radical possibility and not just a criticism of faith. The goal — of both the pessimistic spirit and of this fascinating account of pessimism — is not to depress us, but to edify us about our condition and to fortify us for life in a disordered and disenchanted universe.

Joshua Foa Dienstag is Professor of Political Science at the University of California, Los Angeles. He is the author of Dancing in Chains: Narrative and Memory in Political Theory.

"Mr. Dienstag aims to rescue pessimism from the philosophical sidelines, where it has been shunted by optimists of all ideologies. The book is seductive, because pessimists are generally more engaging and entertaining than optimists, and because, as the author notes, 'the world keeps delivering bad news.' It is almost tempting to throw up one's hands and sign on with Schopenhauer."—Adam Cohen, The New York Times

"The pessimism that Joshua Foa Dienstag seeks to celebrate in his engaging book can be joyful. . . . Philosophical pessimism is an ethic that offers practices to tackle a mistaken belief in human progress. . . . His version of pessimism is of the best sort because it leads to activity."—Mark Vernon, Times Literary Supplement

"[An] absorbing study. . . . Pessimism: Philosophy, Ethic, Spirit examines the pessimistic tradition in all its variants—cultural, metaphysical and existential—and analyzes the works of some of its chief practitioners. . . . When at his best in making his case for the vitality and pertinence of pessimism, Mr. Dienstag may well cause readers to wonder whether they should take up pessimism as their own philosophy."—Joseph Epstein, Wall Street Journal

"A necessary corrective to the unfettered optimism or faith in progress seen in recent world history. . . . [C]omprehensive, readable, and thought provoking."—Library Journal

"Joshua Foa Dienstag's rich and subtle book blows away . . . facile and narrow-minded understandings of pessimism, which invariably reduce it to little more than a mood or a character trait. Dienstag . . . holds that pessimism is a serious and coherent philosophical perspective. . . . Pessimistm: Philosophy, Ethic, Spirit is a work of exact scholarship. . . . [T]he value of the book comes from its brilliant nuances."—Scott McLemee, Newsday

"Dienstag's gallery of incompatibles proves that pessimists can't be made to march in step, even as a coherent philosophical tradition. And the other thing that this densely argued, but always lively and engaging, book successfully proves is that pessimism works best when it drops the arguments in its favor and settles for bitter laughter."—Lawrence Klepp, Weekly Standard

"These studies are quite insightful. A critic might object that, in attempting to discern the limits of meliorism, pessimism fails to recognize that those limits themselves may be discerned only in hindsight. Pessimism might respond that this is itself another instance of those limits. . . . Highly recommended."—Choice

"Dienstag's . . . book is not just a study in political theory but a challenge to its contemporary practice, and for this he deserves our gratitude. . . . [B]old, original and admirable."—Ryan Patrick Hanley, American Political Science Review

"Pessimism was a very enjoyable read and I would recommend it to anyone who is remotely interested in the theme. The author's use of aphorisms at the end of the book was especially stirring, as it was clear that the author was enjoying his subject. Dienstag's work is creative and learned, and even with the critical remarks above, is well argued and will hopefully open up a space where more research into this marginalized tradition will arise."—Michael Bruce, Metapsychology Online Reviews

"There is much to admire in [this] book, especially [its] ambitious scope and original choice of characters. . . . Dienstag's book is a balanced appraisal and a nuanced endorsement of a long tradition in modern thought, that attempts to reframe the history of political thought so that pessimism becomes one of its major strands."—Aurelian Craiutu, European Journal of Political Theory

"It seems that with each passing day the faith in progress becomes less sustainable, less believable, whether one consults environmental, social, or political data. The pessimistic tradition, having confronted the human situation without relying upon this faith, affords us a diverse wealth of resources for going on and even for doing worthy things. Dienstag justifies his dramatic claim that we have been ignoring the pessimistic tradition to our own impoverishment. But his articulation of this tradition, as befits the pessimistic spirit, is provisional and an invitation to others to join in its exploration. There is no other book quite like Dienstag's."—Melissa A. Orlie, University of Illinois

"I think this book is successful in what it sets out to do. It is extremely ambitious: it seeks to recast European political thought over the last 300 years and to make that recasting appealing to contemporary readers. I concur with most of the analyses and in all cases they are creative and enlightening."—Tracy Strong, University of California, San Diego