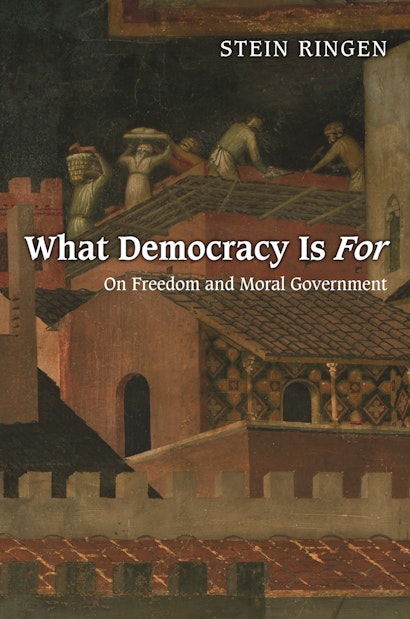 In this provocative book, Stein Ringen argues that the world’s democracies are failing to live up to their ideals — the United States and Great Britain most especially. The core value of democracy, he contends, is freedom, the freedom to live a good life according to one’s own choosing. Yet he shows that democracy’s freedom is on the decline. Citizens are increasingly distrustful of political systems weighted by money, and they don’t participate in political affairs as they once did. Ringen warns of the risks we face if this trend continues, and puts forth an ambitious proposal for democratic reforms.


The issues that concern him are ones that should concern us all. They include education, poverty, the social and economic roles of families, the lack of democracy in our economic lives, and the need to rejuvenate municipal democracy. Along the way, Ringen proposes policy solutions aimed at restoring democracy, such as universal vouchers for education, substituting the principle of individual insurance for social-welfare pensions, and rethinking how we measure poverty in rich and poor countries. He calls for the revival of local democracy, a democratically grounded global economy, and the protection of political democracy from the transgressions of economic power.


The way to protect democracy is not to cheer it, but to reform it. What Democracy Is For offers a bold defense of democratic ideals, grounded in real reforms.

Stein Ringen is Professor of Sociology and Social Policy at the University of Oxford. His books include Citizens, Families, and Reform and The Possibility of Politics.

"This is a hard-hitting, thoughtful and also, for the most part, a hopeful book...argues that progress towards real freedom and real democracy can still be achieved."—Andrew Gamble, Times Literary Supplement

"[B]rings to bear the fruits of a lifetime of hard intellectual work, exploring the social and economic realities of contemporary welfare states—not through their fond self-imaginings or effusive advertisements for themselves, but through their far more erratic capacity to aid their many citizens who still stand in acute need."—John Dunn, Times Higher Education Supplement

"[A] reworking, in accessible and convincing detail, of the insight that the person demanding freedom to indulge unexamined impulses is a slave...a strong and thoughtful argument for putting positive flesh on the skeleton of negative liberty."—John Lloyd, Financial Times

"Ringen compiles an impressive range of data designed to evaluate various dimensions of the political, economic and social life of a number of contemporary democracies."—Martin Leet, Australian Review of Public Affairs

"Political symbols often lose value through their very success, and much work must be done to recapture the engendering experiences to which they point. Ringen . . . is dedicated to doing this work for 'democracy.' . . . [C]learly destined to be a classic."—M. Berheide, Choice

"This is a brilliant book...You may disagree with his arguments, but they have the beauty of transparency."—The Guardian

"[W]ith a tocquevillian inspiration...will easily reach the status of a classic in the literature deepening the great liberal tradition."—Raymond Boudon, Commentaire

"[O]ne need not agree with Ringen on the relationship between poverty and freedom, or even on the obligation of the state to eradicate the former in order to guarantee the latter, in order to find his ideas for policy reform quite worthwhile."—Adam Fleisher, International Affairs

"Even if many of the ideas in this book are controversial and provocative, that is precisely why it is worth reading. I think this book can be of great interest for everyone interested in social justice, democratic theory and the institutional implication of democracy and social justice."—Harald Borgebund, Political Studies Review

"What Democracy Is For offers a bold defense of democratic ideals, grounded in real reforms."—World Book Industry

"This book, of Tocquevillian inspiration, is particularly welcome in a time of growing skepticism on the virtues of democracy and possibly of withering democracy. It shows that genuine progress is possible, that reforms by good governments can improve the life chances of more people and consequently their ability to be the masters of their own life, in a word: to be free. What Democracy Is For crowns twenty years of reflection, research, and publication on democracy. It will easily reach the status of a classic in the great liberal tradition."—Raymond Boudon, Institut de France

"Ringen's book is a serious and engaging intellectual work—the product of a lively mind grappling with profound issues of modern democracy. It's also a timely work. Ringen examines the classic arguments about what freedom and liberty really mean and the conditions that give rise to freedom. What Democracy Is For raises important questions that are of fundamental interest to anyone concerned about revitalizing the case to be made for democracy."—Neil Gilbert, University of California, Berkeley

"This book is written by one of the leading scholars in the field, but in plain-man's language that everybody can understand. Each chapter is at the level of the state of the art and provides a host of illuminating insights. This is not just another mainstream book but a unique piece on the merits and problems of democracy which will have an impact on how the next generation thinks."—Jens Alber, Social Science Research Center Berlin