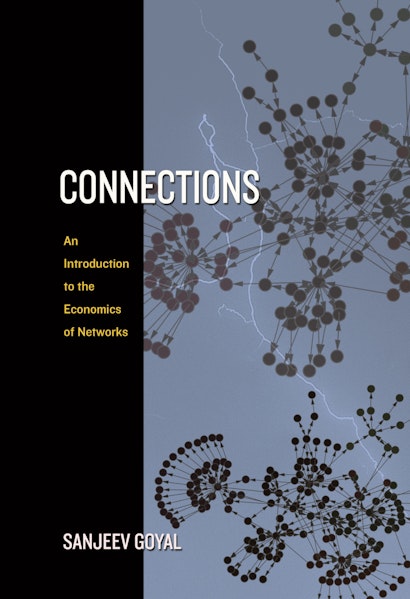 Networks pervade social and economic life, and they play a prominent role in explaining a huge variety of social and economic phenomena. Standard economic theory did not give much credit to the role of networks until the early 1990s, but since then the study of the theory of networks has blossomed. At the heart of this research is the idea that the pattern of connections between individual rational agents shapes their actions and determines their rewards. The importance of connections has in turn motivated the study of the very processes by which networks are formed.


In Connections, Sanjeev Goyal puts contemporary thinking about networks and economic activity into context. He develops a general framework within which this body of research can be located. In the first part of the book he demonstrates that location in a network has significant effects on individual rewards and that, given this, it is natural that individuals will seek to form connections to move the network in their favor. This idea motivates the second part of the book, which develops a general theory of network formation founded on individual incentives. Goyal assesses the robustness of current research findings and identifies the substantive open questions. Written in a style that combines simple examples with formal models and complete mathematical proofs, Connections is a concise and self-contained treatment of the economic theory of networks, one that should become the natural source of reference for graduate students in economics and related disciplines.

Sanjeev Goyal is professor of economics at the University of Cambridge and a fellow of Christ's College. He is one of the pioneers in the economic study of networks, and his work has appeared in leading international journals such as Econometrica, Journal of Political Economy, the Review of Economic Studies, and the Journal of Economic Theory.

"This is a systematic account of a very new branch of economic theory that has applications to labour markets, industrial organization and the economics of innovation. . . . Excellent."—Times Higher Education

"The economy . . . will be one of the greatest beneficiaries of network thinking. Goyal's Connections, the first comprehensive treatment of network economics, is an important step in this fascinating journey."—Albert-Laszlo Barabasi, Department of Physics, Northeastern University

"This book provides a comprehensive account of the antecedents and consequences of networks. Scholars who are interested in a boundary-spanning account of this important phenomenon will find this book to be extremely valuable."—Ranjay Gulati, Harvard Business School

"Networks is becoming a new and exciting interdisciplinary research area integrating ideas from many fields, including sociology, economics, and computer science, in each case studying how networks and the social setting affect outcomes. Connections provides an excellent introduction to this emerging area from an economic perspective, and will be invaluable for researchers interested in any aspect of the subject."—Eva Tardos, Department of Computer Science, Cornell University

"Sanjeev Goyal presents a clear and comprehensive account of the work in this field to which he is a major contributor. Connections analyzes two important questions. How does the structure of the network of interactions influence economic outcomes and how do networks evolve if people can consciously choose those with whom they want to be linked?"—Alan Kirman, L'école des Hautes études en Sciences Sociales, Université D'Aix Marseille III, Institut Universitaire de France

"This book is an excellent introduction to the theory of social networks and should be the top choice for any graduate student interested in the subject."—Markus Mobius, Department of Economics, Harvard University

"Connections provides an overview of the new and exciting economic approach to social networks. Accessible to noneconomists and providing a wide range of illustrations, including information-sharing networks, research-collaboration networks among firms, and labor-market networks, the book addresses two main questions: How does a pattern of connections influence behaviors, the efficiency of outcomes, and the diffusion of information? And what are the incentives to establish connections in the first place? Highly recommended."—Gabrielle Demange, L'Ecole des Hautes Etudes en Sciences Sociales, Paris

"Written by a pioneer and leading contributor in the field, Connections provides an authoritative account of the recent economic literature on networks. It discusses theoretical models, economic applications, and empirical evidence on networks in a clear, concise, and vivid fashion. Undoubtedly, this book will prove to be invaluable, both as a reference on network theory and as a textbook for advanced students in economic theory."—Francis Bloch, GREQAM, Marseille; and University of Warwick