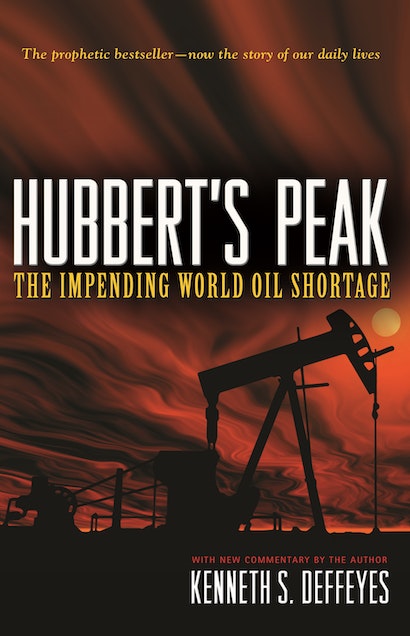 In 2001, Kenneth Deffeyes made a grim prediction: world oil production would reach a peak within the next decade — and there was nothing anyone could do to stop it. Deffeyes’s claim echoed the work of geophysicist M. King Hubbert, who in 1956 predicted that U.S. oil production would reach its highest level in the early 1970s. Though roundly criticized by oil experts and economists, Hubbert’s prediction came true in 1970.


In this updated edition of Hubbert’s Peak, Deffeyes explains the crisis that few now deny we are headed toward. Using geology and economics, he shows how everything from the rising price of groceries to the subprime mortgage crisis has been exacerbated by the shrinking supply — and growing price — of oil. Although there is no easy solution to these problems, Deffeyes argues that the first step is understanding the trouble that we are in.

Kenneth S. Deffeyes is professor emeritus at Princeton University. Prior to teaching, he worked alongside M. King Hubbert at the Shell Oil research laboratory in Houston.

"Praise for the previous edition: "Deffeyes has reached a conclusion with far-reaching consequences for the entire industrialized world. . . . The 100-year reign of King Oil will be over.""—Fred Guterl, Newsweek

"Praise for the previous edition: "Deffeyes makes a persuasive case. . . . This is an oilman and geologist's assessment of the future, grounded in cold mathematics. And it's frightening.""—Paul Raeburn, Scientific American

"Praise for the previous edition: "Deffeyes writes with the taut reasoning of a scientist and the passion of someone raised in the industry. His background is ideal for this subject, and the book is a gem. . . . Read Hubbert's Peak—it's better to know what lies ahead than to be surprised too late to respond.""—Brian J. Skinner, American Scientist

"Praise for the previous edition: "A persuasive prophecy. Hubbert's story is important and needs to be told. I suspect that historians in years to come will recognise Hubbert's Peak as a historical turning point.""—Tim Burnhill, New Scientist

"Praise for the previous edition: "A most readable handbook. . . . If [Deffeyes] is right we have, at most, two or three years in which to prepare for yet another price shock, and to accelerate our move away from oil as fuel. The strength of the book lies in its solid background and well-explained basis for that single prediction.""—Stuart Young, Nature

"Praise for the previous edition: "[Some] experts . . . worry that the global peak in production will come in the next decade. . . . A heavyweight has now joined this gloomy chorus. Kenneth Deffeyes argues in a lively new book that global oil production could peak as soon as 2004.""—The Economist

"Praise for the previous edition: "Deffeyes, using Hubbert's methodology, shows that the trajectory of world reserves is closely following the pattern of U.S. discovery and depletion, with just a few decades' lag. Drilling deeper, in more remote locations, and with more elaborate technologies won't tap reserves that don't exist. . . . America's energy policy needs to tilt away from oil and in favor of conservation, new technology, and domestic renewables. The time to act is now, before the next wave of gas lines and rationing is upon us.""—Robert Kuttner, Business Week

"Praise for the previous edition: "There are few things as important nowadays as the energy system, and few books on the subject as thought provoking as this one.""—J.R. McNeill, Wilson Quarterly

"Praise for the previous edition: "We have long been told that fossil fuels wouldn't last forever, but Deffeyes hypothesis is still startling: Sometime during the next decade, the supply of oil won't keep up with the demand. Because of its broad impact Hubbert's Peak is a must-read for almost everyone—scientists, policy-makers, environmentalists, people who buy cars.""—Ann Wagner, NationalJournal.com

"Praise for the previous edition: "An ideal freshman reading assignment in any geology course concerned with energy, geological resources, public policy, general science applications in our modern world, or similar topics. All teachers, from high school through graduate level, in all natural sciences, political science, government, business, and engineering courses should read this book and encourage their students to consider its ramifications in their fields.""—C. John Mann, Journal of Geoscience

"Praise for the previous edition: "[A] small and delightfully readable book.""—Choice

"Praise for the previous edition: "Deffeyes's unsettling message is that, although society has been slow to respond to the Hubbert's Peak forecast of world oil decline, a permanent drop in oil production will nevertheless begin within the next decade. Humanity has a brief period in which to wean itself from crude oil, increase energy conservation, and design alternative energy sources.""—Dan Johnson, The Futurist

"Praise for the previous edition: "I commend this book . . . to anyone concerned about the future development of planet Earth.""—John Parker, Geoscientist

"Praise for the previous edition: "This book sends a message loud and clear: World petroleum production is going to peak within this decade, maybe as early as 2005, but no later than 2009 and there is hardly any way of escaping from this truth. . . . The book is accessible, easy to read and informative.""—Subhes C. Bhattacharyya, Natural Resources Forum

"Praise for the previous edition: "In the politics of oil, the left is passionately, sentimentally, tree-huggingly pro-environment, while the right shrugs as it climbs into its official mascot, the biggest sport utility vehicle available. . . . In the slide down Hubbert's Peak, political differences will matter less. If those who planned the Sept. 11 attacks know as much about economics as they do about aeronautics, their next target may be the Saudi Arabian oil fields, on which America, Asia, and Europe are overly dependent.""—Martin Nolan, The Boston Globe

"Praise for the previous edition: "This book . . . should be read . . . by all politicians, by all students, no matter what their discipline, and indeed by anyone concerned about their grandchildren's welfare. Reading Hubbert's Peak is the intellectual equivalent of bungee jumping, being simultaneously exhilarating and terrifying.""—R. C. Selley, Geological Magazine