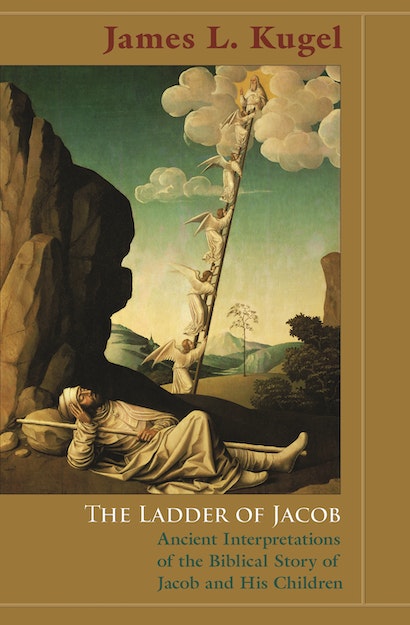 Rife with incest, adultery, rape, and murder, the biblical story of Jacob and his children must have troubled ancient readers. By any standard, this was a family with problems. Jacob’s oldest son Reuben is said to have slept with his father’s concubine Bilhah. The next two sons, Simeon and Levi, tricked the men of a nearby city into undergoing circumcision, and then murdered all of them as revenge for the rape of their sister. Judah, the fourth son, had sexual relations with his own daughter-in-law. Meanwhile, jealous of their younger sibling Joseph, the brothers conspired to kill him; they later relented and merely sold him into slavery. These stories presented a particular challenge for ancient biblical interpreters. After all, Jacob’s sons were the founders of the nation of Israel and ought to have been models of virtue.


In The Ladder of Jacob, renowned biblical scholar James Kugel retraces the steps of ancient biblical interpreters as they struggled with such problems. Kugel reveals how they often fixed on a little detail in the Bible’s wording to “deduce” something not openly stated in the narrative. They concluded that Simeon and Levi were justified in killing all the men in a town to avenge the rape of their sister, and that Judah, who slept with his daughter-in-law, was the unfortunate victim of alcoholism.


These are among the earliest examples of ancient biblical interpretation (midrash). They are found in retellings of biblical stories that appeared in the closing centuries BCE — in the Book of Jubilees, the Aramaic Levi Document, the Testaments of the Twelve Patriarchs, and other noncanonical works. Through careful analysis of these retellings, Kugel is able to reconstruct how ancient interpreters worked. The Ladder of Jacob is an artful, compelling account of the very beginnings of biblical interpretation.

James L. Kugel, formerly Starr Professor of Hebrew Literature at Harvard University, is Director of the Institute for the History of the Jewish Bible at Bar-Ilan University in Israel, where he also serves as Professor of Bible. Kugel is the author of ten books, including The God of Old: Great Poems of the Bible and The Bible as It Was (a finalist for the National Book Critics Circle Award for nonfiction and the winner of the Grawemeyer Prize in Religion in 2001). He lives in Jerusalem.

"The Ladder of Jacob is one of the most readable and attractive introductions to the general style of traditional Jewish reasoning from Scripture. It captures the strange combination of playfulness with deadly seriousness that characterizes this exegetical tradition, and which makes studying it so enjoyable. The methods it works with are profoundly interesting to the historian of ideas, who will be aware of parallels in other scriptural religions."—John Baron, Times Literary Supplement

"James L. Kugel demonstrates that . . . ancient sources described the biblical narratives in terms of various motifs that brought fresh meanings to the stories and their place in Israel's religious history. . . . Kugel helpfully guides us through the marvelous world of ancient biblical interpretation."—Publishers Weekly

"In his elegant new book, . . . James L. Kugel takes on . . . perplexing . . . questions with great erudition and admirable lucidity. . . . Whether unravelling some philological tangle or reconciling divergent readings, he has the enviable knack of capturing his reader's attention and keeping it firmly tethered. . . . Whether discussing Reuben's sin with Bilhah or the priesthood of Levi or Judah and Tamar, Mr. Kugel moves easily from moral dilemmas to textual enigmas; his book thus serves as a guide to interpretation as well."—Eric Ormsby, New York Sun

"Biblical scholar Kugel offers an in-depth study of some of the more difficult stories of Jacob and Jacob's family. . . . [A]ny biblical researcher can profit from understanding the questions raised by these text, and analyzing the answers they provide. A valuable resource."—Library Journal

"Highly recommended. . . . James L. Kugel persuasively argues that ancient interpreters did more than simply apologize for the less-than-illustrious behavior of certain biblical figures . . . by demonstrating how exegetical motifs arise from some quirk in scripture. . . . Kugel has written a book that is obviously important for specialists (it will certainly be instrumental in reevaluating the history of the Testaments of the Twelve Patriarchs), but he is so remarkably adept at making opaque materials accessible to nonspecialists that both novices and the initiated will read his latest work with evident relish."—Choice

"James Kugel...is an expert in the history of biblical interpretation and well equipped to write a book that gives the reader an introduction to and explanation of the ancient exegesis of the particular text from Genesis under discussion in this book.... [It] can be recommended for every one interested in the development of certain biblical traditions, but especially for those interested in the way ancient interpreters treated biblical texts."—S I Cronje, Verbum et Ecclesia

"[Kugel]...takes half a dozen Biblical stories—Jacob's career, his heavenly ladder, the rape of Dinah, Reuben's dalliance with Bilhah, Levi's elevation to priesthood, Judah's victimization of Tamar—and invites the reader to accompany him in a survey of ancient Biblical commentaries which range far beyond the well known canonical literature...James Kugel has presented the reader with a dazzling array of Midrashic and other texts which testify to the extraordinary vitality of the rabbinic mind and its successors in unpackaging the hidden meanings in the Hebrew Bible."—Arnold Ages, Chicago Jewish Star

"[Kugel] masterfully reveals why mishnaic, rabbinic, and targumic commentaries make the moves they do by analytically assessing the how and the why in each step. In this sense what Kugel does, helps the most rigid historical-critical exegetes . . . become more alert to the intricacies of the literary-syntactical elements—particularly the cruxes—and also become more appreciative of the artistic aspects of ancient allegorical methods."—Craig D. Bowman, Book Reviews and Notes

"Kugel . . . most elegantly and convincingly explores how . . . early interpreters conceived of the Bible and of their hermeneutical task. . . . This book—and Kugel's major oeuvre of recuperating early exegesis—is an important, fascinating, and often brilliant endeavor."—Ronald Hendel, Interpretation

"I can certainly recommend Kugel's book as yet another masterpiece of the history of interpretation. It should serve as a guide for others attempting to do so, as well as a wonderful sourcebook for those working on Genesis."—Dan Clanton, Journal of Hebrew Scriptures

"All in all a fascinating and valuable contribution to the history of interpretation."—R. Tomes, Society for Old Testament Studies

"James Kugel is the expert in the history of biblical interpretation, and he offers a great introduction to and explanation of ancient exegesis of these parts of Genesis."—James VanderKam, University of Notre Dame

"A wonderful book. The chapters follow their subjects detail by detail with a kind of masterfully unpredictable logic, almost like a detective story."—David Stern, University of Pennsylvania

"James Kugel fuses immense learning with a poignant (yet wary) nostalgia for what he has called 'the God of old'. The Ladder of Jacob could be read side-by-side with Thomas Mann's Joseph tetralogy. Kugel, like Mann, belongs to authentic cultures now vanished or vanishing. Both novelist and scholar temper their ironies with wisdom and a sense of justice."—Harold Bloom, author of Jesus and Yahweh and Where Shall Wisdom Be Found?