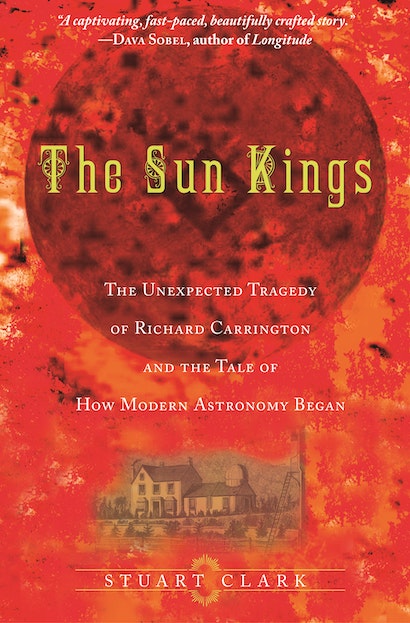 In September of 1859, the entire Earth was engulfed in a gigantic cloud of seething gas, and a blood-red aurora erupted across the planet from the poles to the tropics. Around the world, telegraph systems crashed, machines burst into flames, and electric shocks rendered operators unconscious. Compasses and other sensitive instruments reeled as if struck by a massive magnetic fist. For the first time, people began to suspect that the Earth was not isolated from the rest of the universe. However, nobody knew what could have released such strange forces upon the Earth — nobody, that is, except the amateur English astronomer Richard Carrington.


In this riveting account, Stuart Clark tells for the first time the full story behind Carrington’s observations of a mysterious explosion on the surface of the Sun and how his brilliant insight — that the Sun’s magnetism directly influences the Earth — helped to usher in the modern era of astronomy. Clark vividly brings to life the scientists who roundly rejected the significance of Carrington’s discovery of solar flares, as well as those who took up his struggle to prove the notion that the Earth could be touched by influences from space. Clark also reveals new details about the sordid scandal that destroyed Carrington’s reputation and led him from the highest echelons of science to the very lowest reaches of love, villainy, and revenge.

The Sun Kings transports us back to Victorian England, into the very heart of the great nineteenth-century scientific controversy about the Sun’s hidden influence over our planet.

Stuart Clark is a former editor of the United Kingdom's best-selling astronomy magazine, Astronomy Now. He currently writes for the European Space Agency and is a regular contributor to such magazines as New Scientist and BBC Focus. He is the author of several books, including Journey to the Stars and Deep Space: The Universe from the Beginning.

"The techniques of Carrington and his contemporaries gave birth to the new science of astrophysics, which can probe questions about the structure, function, and origin of the stars, planets, and the universe at large. . . . From Carrington's observations, Clark spins a lively account of seminal discoveries in spectroscopy, photography, and theoretical physics that led to the present-day understanding."—Laurence A. Marschall, Natural History

"Science journalist Stuart Clark, in his new book The Sun Kings, places [English amateur astronomer Richard] Carrington at the fulcrum of a century-long debate over the effects of sunspots, because he drew on two very different sorts of scientific observations—studies of sunspots and of the Earth's magnetic field—that together would eventually allow astronomers to see the relation between solar and terrestrial activity."—Alex Soojung-Kim Pang, American Scientist

"Meticulously researched, The Sun Kings chronicles the largely untold story of the inception of modern astrophysics in marvelous detail."—SEED Magazine

"We still don't understand the sun, but Clark shows with verve and assurance how it is that we understand so much more than we used to."—Lorien Kaye, The Age

"A tale of ongoing speculations and proofs, The Sun Kings reveals, above all, Stuart Clark's passion for all things astronomical."—Brett Josef Grubisic, Vancouver Sun

"Stuart Clark's The Sun Kings is a compelling account of how astronomers came to understand solar flares, sunspots, and magnetic storms. It is also a vivid portrait of the scientific climate of a vanished era.... The Sun Kings is an excellent and fast-paced read for anyone interested in astronomy, history, or human drama, as well as important context for understanding some of the reasons Earth's climate changes over time."—Melissa A. Barton, BookSlut.com

"The Sun Kings uncovers much of the history of how we came to understand how solar flares and associated phenomena can wreak havoc on Earth.... This is popular science history told with rare accuracy and enough intrigue to keep the reader entertained."—Neil Bone, Astronomy Now

"Each story is told with the clarity required to keep the non-expert engrossed and the stories are entertaining and genuinely fascinating."—Bruce Elder, Sydney Morning Herald

"Simply telling the history of scientific solar observations and the beginnings of modern astronomy and making the writing a page-turner would be a difficult feat, but Clark does it superbly. This is not a dry scientific chronology but a story of real men and women who had lives beyond the science they performed.... Well-written and well-researched with a thorough bibliography and index."—M.V. Golden, Choice

"The all-powerful, infinitely fragile nexus between Earth and its sun drives Stuart Clark's riveting study of astronomer Richard Carrington, dubbed the Sun King by his 19th-century English peers. Carrington's specialty was sunspots and solar flares, but the real drama here is off-telescope."—Tony Maniaty, The Australian

"Stuart Clark's The Sun Kings is a lively, informative discourse on the research that led to a discovery that in Victorian times was revolutionary: a cause-and-effect relationship between events on the Sun and Earth. Although the book is biographical, the science is not secondary: The characters and their research are skillfully interwoven in the narrative. The inclusion of the discoveries and personas of so many of the pioneers of Victorian astrophysics will make Clark's book an enjoyable and meaningful read for anyone, professional physicist and layperson alike, who has an interest in the roots of physics and astronomy...Clark is writing for a popular science audience who will enjoy his lively and eminently readable account of the lives and scientific careers of those whose work furthered the understanding of the Sun-Earth connection."—Richard C. Canfield, Physics Today

"What a delight! This is an enthralling account of the personal lives of the scientists who first demonstrated the Sun's dominant influence over Earthly affairs and laid the foundation for modern astronomy and astrophysics. This is a fast-moving, accurate, and fascinating story of diverse personalities, their families, ambitions, hopes, and struggles, their passion for knowledge, for awards, positions and recognition, and the inevitable roles that pride, greed, jealousy, and resentments played in deciding the tragedies, fame and fortune of the founders of modern astronomy."—Manuel K. Oliver, Twenty-first Century Science and Technology

"This is a fascinating and fast-paced narrative."—Allan Chapman, The Observatory

"Clark's engaging and authoritative account of the early years of solar-terrestrial science will he especially valuable as an introduction to space weather for undergraduates and beginning graduate students. It will also appeal more generally as a first-rate scientific detective story involving flesh-and-blood characters."—Edward W. Cliver, Space Weather Quarterly

"Clark's style of popular historical storytelling effectively conveys the personal, interpersonal, and political aspects of scientific lives and work. He creates clear and interesting nontechnical explanations for solar phenomena and researchers' methods and analyses. Both general and academic readers should appreciate how his narrative demonstrates the multigenerational nature of solar astronomy and relates the contemporary importance of accurate verbal and artistic descriptions of natural phenomena. . . . [T]here can be little doubt that the history of science and public science education both stand to benefit immensely from hybrid forms of historiography like Clark's."—Pamela Gossin, Isis

"Stuart Clark's eminently readable book . . . although aimed at a broad audience, is also useful for the specialist. . . . The significance of coincidences and chance in research, as well as the personal side of science, is well described for the general public. It is highly recommended reading."—Béla Kálmán, Solar Physics

"Solar astronomy is truly a multigenerational science and its beginnings are brilliantly summarised in Stuart Clark's story, built around the greatest magnetic storm ever recorded. . . . The tale is lively, informative and often compelling."—Keith Mansfield, Plus Magazine

"In this sprightly and spirited narrative, a few determined scientists set out to correlate the pattern of dark spots on the Sun's face with the igniting of earthly aurora, the interruption of telegraph (later satellite) transmissions, and even the price of wheat in England. Of course, the world thought them mad. The 'sun kings,' as Stuart Clark so aptly names these pioneers, persevered through ridicule, animosity, and personal tragedy to forge a link across space and fathom the true nature of the Sun. I found myself captivated by the characters, the colossal problems they tackled, and the stunning conclusions they finally reached. I commend Clark for combining so many interesting ideas into a single, fast-paced, beautifully crafted story."—Dava Sobel, author of Longitude, Galileo's Daughter, and The Planets

"Herein lies the tale of intrepid astronomers, across time and cultures, who were the first to observe, identify, and document our misbehaving Sun. But by the time you are done, you realize that the story's main protagonist—the one with all the personality-is not any one of the scientists, but the Sun itself. A delightful, informative read."—Neil deGrasse Tyson, astrophysicist, American Museum of Natural History, author of Death by Black Hole: And Other Cosmic Quandaries

"Stuart Clark illuminates the dawn of astrophysics by tracing the rise and fall of Richard Carrington, the man who first glimpsed how events on the Sun affect our lives on Earth. No faceless automatons, the scientists in this tale blend a passion for their work with the more worldly passions of pride, jealousy, greed, and lust."—Robert P. Kirshner, Clowes Professor of Science, Harvard University

"Stuart Clark's The Sun Kings is undoubtedly the most gripping and brilliant popular-science history account that I have ever read. It is informative, accurate, and relevant. Clark's ability to write so vividly makes me seethe with jealousy."—Owen Gingerich, author of The Book Nobody Read: Chasing the Revolutions of Nicolaus Copernicus

"Clark tells a gripping story with several intersecting personal dramas that make unexpectedly exciting reading for a book with such a substantial academic theme. I learned a thing or two about how it was first realized and then proved—over the objection of the powerful Lord Kelvin—that the magnetism thrown off the Sun reaches the Earth. Those not familiar with the overall story will benefit even more from the discussion and analysis."—Jay M. Pasachoff, coauthor of The Cosmos: Astronomy in the New Millennium