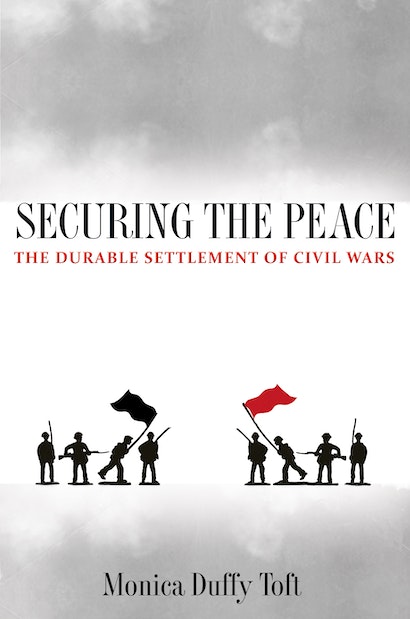 Timely and pathbreaking, Securing the Peace is the first book to explore the complete spectrum of civil war terminations, including negotiated settlements, military victories by governments and rebels, and stalemates and ceasefires. Examining the outcomes of all civil war terminations since 1940, Monica Toft develops a general theory of postwar stability, showing how third-party guarantees may not be the best option. She demonstrates that thorough security-sector reform plays a critical role in establishing peace over the long term.


Much of the thinking in this area has centered on third parties presiding over the maintenance of negotiated settlements, but the problem with this focus is that fewer than a quarter of recent civil wars have ended this way. Furthermore, these settlements have been precarious, often resulting in a recurrence of war. Toft finds that military victory, especially victory by rebels, lends itself to a more durable peace. She argues for the importance of the security sector — the police and military — and explains that victories are more stable when governments can maintain order. Toft presents statistical evaluations and in-depth case studies that include El Salvador, Sudan, and Uganda to reveal that where the security sector remains robust, stability and democracy are likely to follow.


An original and thoughtful reassessment of civil war terminations, Securing the Peace will interest all those concerned about resolving our world’s most pressing conflicts.

Monica Duffy Toft is associate professor of public policy at the John F. Kennedy School of Government, Harvard University. She is the author of The Geography of Ethnic Violence (Princeton).

"Overall, the author develops a compelling argument and presents clear causal mechanisms that help explain what differentiates those civil wars that reoccur from those that do not. . . . Securing the Peace provides a thorough and engrossing look at the causes of post-conflict stability and has original and important implications for both empirical research and policymaking."—Richard Frank, Political Science Quarterly

"In her provocative study, Toft examines the outcomes of all civil war terminations since 1940 with the goal of developing a general theory of post-civil-war stability."—Choice

"Securing the Peace offers an analysis that is as bold as it is persuasive. Toft teaches us that negotiated settlement should not be treated as the default option for resolving civil wars. Scholars and policymakers will find this to be a lucid, compelling, and important lesson. Peacemakers, who may inadvertently prolong the very wars they seek to resolve, will ignore this warning at their peril."—Ron E. Hassner, Perspectives on Politics

"Using comprehensive data on internal conflicts, Toft challenges the flawed assumptions driving international peacemaking diplomacy and peacekeeping operations, which sadly may be prolonging civil wars instead of ending them. This provocative and politically incorrect book ought to stimulate a long-needed debate over the efficacy of current approaches to ending conflicts."—Andrew Natsios, Georgetown University

"This well-researched book makes an incredibly important contribution to our understanding of civil war termination and recurrence. While we have known for some time that military victory leads to more decisive and lasting cessations of violence, it was not clear why. Toft addresses these questions and persuasively demonstrates that the key to long-lasting peace lies in the reform of the security sector."—Stephen Saideman, McGill University

"An impressive book, Securing the Peace breaks new ground in the important area of civil war settlements. Toft reaches new and counterintuitive conclusions based on the analysis of quantitative data and case studies, and brings us forward in our understanding of this critical issue."—Roy Licklider, Rutgers University