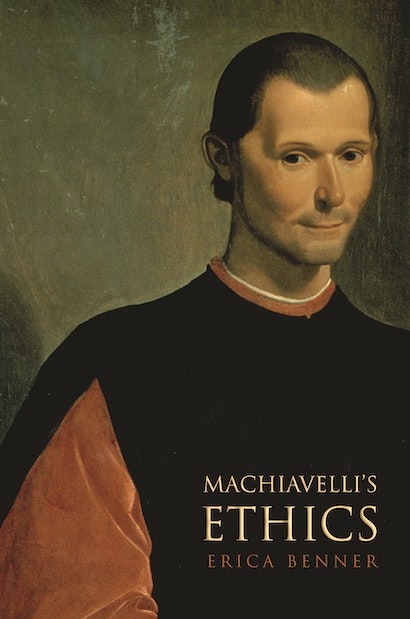 Machiavelli’s Ethics challenges the most entrenched understandings of Machiavelli, arguing that he was a moral and political philosopher who consistently favored the rule of law over that of men, that he had a coherent theory of justice, and that he did not defend the “Machiavellian” maxim that the ends justify the means. By carefully reconstructing the principled foundations of his political theory, Erica Benner gives the most complete account yet of Machiavelli’s thought. She argues that his difficult and puzzling style of writing owes far more to ancient Greek sources than is usually recognized, as does his chief aim: to teach readers not how to produce deceptive political appearances and rhetoric, but how to see through them. Drawing on a close reading of Greek authors — including Thucydides, Xenophon, Plato, and Plutarch — Benner identifies a powerful and neglected key to understanding Machiavelli.


This important new interpretation is based on the most comprehensive study of Machiavelli’s writings to date, including a detailed examination of all of his major works: The Prince, The Discourses, The Art of War, and Florentine Histories. It helps explain why readers such as Bacon and Rousseau could see Machiavelli as a fellow moral philosopher, and how they could view The Prince as an ethical and republican text. By identifying a rigorous structure of principles behind Machiavelli’s historical examples, the book should also open up fresh debates about his relationship to later philosophers, including Rousseau, Hobbes, and Kant.

Erica Benner is fellow in ethics and history of philosophy at Yale University, and the author of Really Existing Nationalisms.

"Taking a cue from Rousseau, who read Machiavelli as a serious republican thinker, Benner argues that Machiavelli did not at all separate ethics from politics. . . . Benner's interest in Machiavelli's rhetorical strategies produces gratifyingly detailed and impressive readings of difficult passages. . . . This is a provocative argument for Machiavelli as a proponent of moral autonomy and ethical reflectiveness."—Victoria Kahn, Times Literary Supplement

"This book is a prime example of thorough and detailed scholarship. . . . With the publication of this bold but responsible contribution to scholarship, those who assert that Machiavelli was not an ethical philosopher have a significant amount of evidence and argumentation to overcome."—David F. Horkott, International Philosophical Quarterly

"[Benner's] reading yields an innovative and stimulating interpretation of a notoriously difficult (even slippery) author that is meant to reveal his distinctive contribution to philosophical concerns. Benner's insights are often surprising and challenging, but are definitely worthy of careful consideration. . . . Her book gives us very good reasons for thinking that Machiavelli may have adopted the kind of ethical individualism that she ascribes to him."—Cary J. Nederman, Notre Dame Philosophical Review

"[A] book that swims against the current, one that orients its perspective backwards, towards antiquity. A refreshing catharsis now that I am stepping out from the flood of current events. Benner puts forward the thesis that Machiavelli was no Machiavellian in his values [but] a moral philosopher with high republican ideals, a critical humanist. . . . Least in tune with our age are the great demands that, following in the footsteps of Machiavelli and the classics of antiquity, Benner makes on readers [to] train themselves in the art of seeing through all manner of manipulations. A call to break through the cobwebs of propaganda that the powerful try to run around citizens, especially in election years."—Rolf Gustavsson, Svenska Dagbladet

"Machiavelli's Ethics is a remarkable account of the dominant themes in Machiavelli's work and his role as a moral and political philosopher unusually sensitive to reality. It should be read by all who are interested in philosophy, politics, rhetoric, and the history of Western thought. Books of such perceptive insight and scholarly care arrive infrequently."—Michael K. Potter, Philosophy in Review

"Machiavelli's Ethics is a superb scholarly book. Erica Benner does truly impressive work in analyzing Machiavelli's views on the most fundamental ethical issues—including necessity and virtue, justice and injustice, and ends and means. She shows, with very solid evidence, that Machiavelli did in fact worry a lot about justice and that he put it at the core of his republican theory."—Maurizio Viroli, author of Niccolò's Smile: A Biography of Machiavelli

"Machiavelli's Ethics is excellent—learned, subtle, highly original, and a constant pleasure to read. And, since it is really a study of Machiavelli's thought in its entirety, it is also the first book of its kind. Its originality lies in taking seriously the claim by some sixteenth- and seventeenth-century readers—notably Bacon, Spinoza, and Alberico Gentili—that Machiavelli was essentially a moral and political philosopher. Erica Benner does a brilliant job of resurrecting this neglected Machiavelli."—Giulia Sissa, University of California, Los Angeles