How the FDA became the world's most powerful regulatory agency 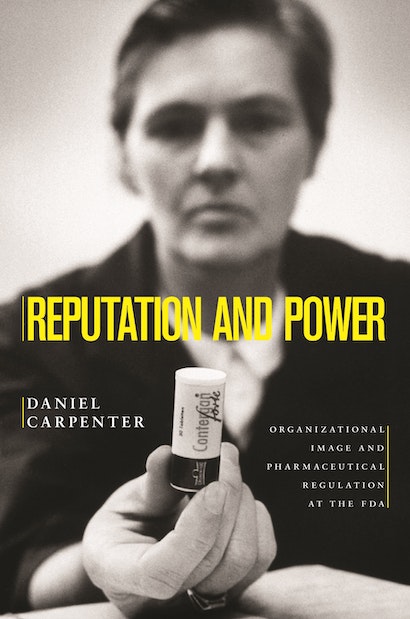 The U.S. Food and Drug Administration is the most powerful regulatory agency in the world. How did the FDA become so influential? And how exactly does it wield its extraordinary power? Reputation and Power traces the history of FDA regulation of pharmaceuticals, revealing how the agency’s organizational reputation has been the primary source of its power, yet also one of its ultimate constraints.

Daniel Carpenter describes how the FDA cultivated a reputation for competence and vigilance throughout the last century, and how this organizational image has enabled the agency to regulate an industry as powerful as American pharmaceuticals while resisting efforts to curb its own authority. Carpenter explains how the FDA’s reputation and power have played out among committees in Congress, and with drug companies, advocacy groups, the media, research hospitals and universities, and governments in Europe and India. He shows how FDA regulatory power has influenced the way that business, medicine, and science are conducted in the United States and worldwide. Along the way, Carpenter offers new insights into the therapeutic revolution of the 1940s and 1950s; the 1980s AIDS crisis; the advent of oral contraceptives and cancer chemotherapy; the rise of antiregulatory conservatism; and the FDA’s waning influence in drug regulation today.

Reputation and Power demonstrates how reputation shapes the power and behavior of government agencies, and sheds new light on how that power is used and contested.

Daniel P. Carpenter is the Allie S. Freed Professor of Government at Harvard University. He is the author of The Forging of Bureaucratic Autonomy: Reputations, Networks, and Policy Innovation in Executive Agencies, 1862-1928 (Princeton).

"Reputation and Power is . . . and authoritative and well researched book. Political scientists will admire Carpenter's scholarship. It is, indeed, a good mix of history, politics, gossip, and intrigue."—Michael Rawlins, Lancet

"In his massive, magisterial Reputation and Power: Organizational Image and Pharmaceutical Regulation at the FDA, the Harvard political scientist Daniel Carpenter provides both a history of the agency and an analysis of how it gained and flexed its most important regulatory power, the ability to keep new drugs off the market. Carpenter carefully documents the ways FDA bureaucrats have worked to exploit opportunities to expand their influence and reshape how the drug industry and the medical profession operate."—Keith E. Wittington, Reason

"This immense volume considers the Food and Drug Administration's regulation of the pharmaceutical industry, focusing on the connection between the FDA's stellar reputation and its ability to wield power as a regulatory body. The book is exceptional, successfully combining an array of methodological approaches."—Choice

"Carpenter's book has much to offer. Reputation and Power will be a valuable resource for anyone who is interested in understanding US pharmaceutical regulation and the debates surrounding it."—Mary K. Olson, Health Affairs

"This book succeeds quite well in achieving its ambitious objectives. It provides a compelling and useful account for the exceptional role of the FDA in American society, government, and regulation. Perhaps more importantly for organizational scholars, it provides a very rich case study of the evolution of an organization's reputation, image and power and how these combine to affect its performance."—Thomas D'Aunno, Administrative Science Quarterly

"Carpenter's book was ten years in the making and it shows. The research is wide ranging and groundbreaking and the impressive range of materials will certainly help expand the field. . . . Reputation and Power is essential reading for modern historians of medicine. In a renewed climate of interest in regulation, it is a sober addition to the previous polemical debates about the world of pharmaceuticals and their regulation and is sure to generate a broad discussion."—Lucas Richert, Social History of Medicine

"Reputation and Power . . . is a masterful study in the best tradition of political science and will stand as a definitive treatment of regulation, and not merely of the FDA's policies and practices. Along with his earlier work, this book will be an essential part of the emerging study of the American administrative state, whether that study takes place in political science, history, sociology, law, or, indeed, in schools of medicine and pharmacology."—John Ferejohn, Perspectives on Politics

"In this truly splendid, magisterial study, Carpenter thoroughly documents and narrates the FDA's struggle with the certainties of science, the uncertainties of politics, and the requirements of reputation, an asset that simultaneously granted the agency autonomy and then took it away through ever-increasing expectations of performance."—Richard Bensel, Cornell University

"Deeply researched and subtly conceived, Reputation and Power demonstrates how much our modern system of drug regulation and clinical research owes to the scientific creativity and political skills of federal drug regulators over the past sixty years. It will be the standard work on the FDA for decades to come, while providing instructive lessons for how one can think critically about government regulation without recourse to the ideological lenses of the Left or the Right."—Harry M. Marks, history of medicine, Johns Hopkins University

"Reputation and Power is by far the most thorough and penetrating study of the most powerful and important regulatory agency in the world—the U.S. Food and Drug Administration—and one of the best studies of any American regulatory agency. The book is essential reading for anyone seriously interested in American politics, public policy, administrative institutions, or health and medicine. This is an extraordinary work."—Paul Quirk, University of British Columbia

"Carpenter has integrated an understanding of the FDA's legal history and programmatic responsibilities with a perceptive grasp of the personalities who shaped that history. His work surpasses in depth and scope all other accounts of the FDA with which I am familiar. No one in the future will be able to write seriously about the FDA's drug approval system without taking account of Carpenter's work. His curiosity knows no limits."—Richard A. Merrill, professor emeritus, University of Virginia, former FDA general counsel, and coauthor of Food and Drug Law: Cases and Materials