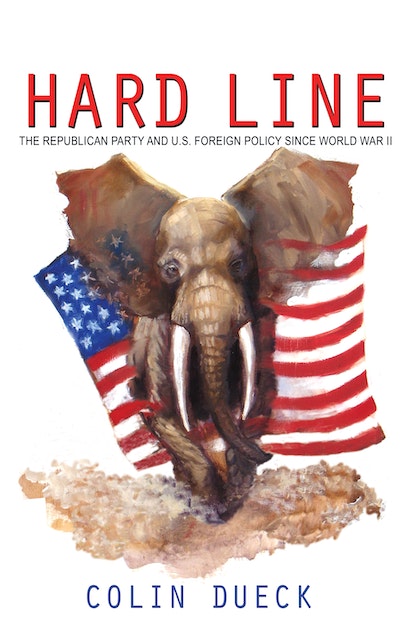 Hard Line traces the history of Republican Party foreign policy since World War II by focusing on the conservative leaders who shaped it. Colin Dueck closely examines the political careers and foreign-policy legacies of Robert Taft, Dwight Eisenhower, Barry Goldwater, Richard Nixon, Henry Kissinger, Ronald Reagan, George H. W. Bush, and George W. Bush. He shows how Republicans shifted away from isolationism in the years leading up to World War II and oscillated between realism and idealism during and after the cold war. Yet despite these changes, Dueck argues, conservative foreign policy has been characterized by a hawkish and intense American nationalism, and presidential leadership has been the driving force behind it.

Colin Dueck is associate professor of public and international affairs at George Mason University. He is the author of Reluctant Crusaders: Power, Culture, and Change in American Grand Strategy (Princeton).

"In Hard Line, a masterful account of the evolution of Republican foreign policy over the last 70 years, Colin Dueck identifies several historical factions within the Republican party: the isolationists, who are heirs to Sen. Robert Taft; the realists, who continue the approach best-identified with the presidency of Richard Nixon; and the hawks and nationalists, who acquired greater prominence in the Reagan years and were best-represented in the administration of George W. Bush."—Nikolas K. Gvosdev, World Politics Review

"Colin Dueck's thorough analysis of the foreign-policy views of Republican political leaders since World War II has two aspects. As history, it is informative, objective, and broadly useful. . . . He presents a careful, detailed policy analysis of Republican presidents starting with Eisenhower, and includes leaders like Goldwater and Taft who significantly shaped party thinking even without the Oval Office. . . . [A]s we enter another presidential season, it is worth remembering Dueck's central insight about the importance of presidential discretion in shaping foreign policy."—John Bolton, former U.S. representative to the United Nations, National Review

"[W]hat a remarkable job of historical synthesis this work embodies. I have hurriedly added large sections of it to my class in the politics of US foreign policy and am sure many other teachers will do likewise."—Timothy J. Lynch, H-Diplo ISSF Roundtable Reviews

"Dueck has written a book that combines solid scholarship with an explicitly political message. . . . [A] thoughtful, well-informed, nuanced, and highly readable analysis."—Choice

"Those wishing to learn more about how Republicans view the world and America's place in it should read Hard Line. Clear, balanced and comprehensive, the book provides an interesting perspective on how Republicans develop and implement their foreign policy vision. . . . Hard Line is an impressive book."—John Shaw, Washington Diplomat

"Hard Line is an impressive account of the history of Republican and conservative foreign policy thinking over the past 60 years."—Tom Switzer, American Review

"Hard Line is an incisive and balanced examination of Republican foreign policy over the past six decades and a persuasive argument on behalf of adherence to a prudent conservative realism as the cornerstone of future US foreign policy in a dangerous world."—Mackubin Thomas Owens, Journal of Strategic Studies

"A lucid, provocative, deeply learned account of contemporary Republican foreign policy from one of America's best young diplomatic historians. If today's conservatives want to move beyond the foreign-policy failures of the Bush era, they should start by reading Dueck's book."—Peter Beinart, author of The Good Fight: Why Liberals—and Only Liberals—Can Win the War on Terror and Make America Great Again

"Colin Dueck notes that foreign policy is made by presidents, not intellectuals, and he is right. But his smart, lively new book shows what intellectuals can add to the discussion: sharp, honest analysis that uncovers the reality behind the rhetoric. Hard Line is more than a masterful guide to Republican thinking and practice over the last century—it is a major contribution to the literature on American foreign policy in general."—Gideon Rose, managing editor of Foreign Affairs

"Dueck has written a clear, persuasive, and important study of Republican foreign policy. Neither an apologist nor a reflexive critic, he examines the various strands that exist within what he describes as a 'hawkish nationalist' bent. He knows that ideas are one thing, implementation and the cut and thrust of policy quite another. A major contribution to our understanding of the last six decades of American foreign policy—and, one suspects, several more to come."—Eliot A. Cohen, Johns Hopkins University

"This book provides an excellent overview of the changes in conservative thinking on foreign policy by looking at the leading figures in each successive era, from Robert Taft to George W. Bush. The prose flows beautifully, and Dueck is admirably objective in his assessments of these individuals. An extremely valuable study."—James M. Goldgeier, George Washington University

"An engaging, important, and timely study, Hard Line offers the best coverage of this period of Republican foreign policy I have seen. Through meticulous research, Dueck demonstrates the coherence and diversity of a uniquely conservative view of international affairs just at the moment when the Republican Party is reexamining and debating its foreign policy agenda for the future."—Henry R. Nau, George Washington University