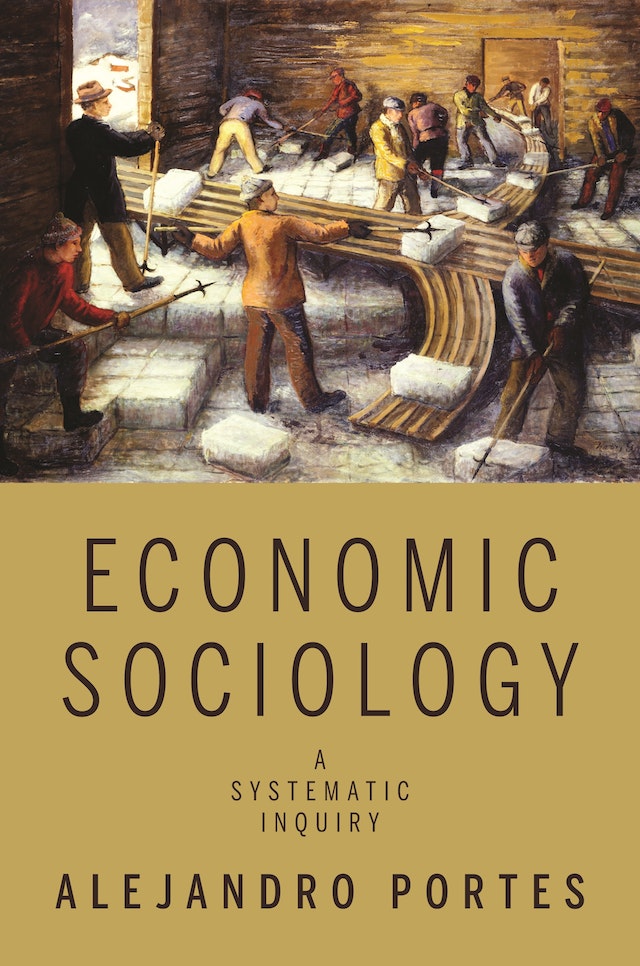 The sociological study of economic activity has witnessed a significant resurgence. Recent texts have chronicled economic sociology’s nineteenth-century origins while pointing to the importance of context and power in economic life, yet the field lacks a clear understanding of the role that concepts at different levels of abstraction play in its organization. Economic Sociology fills this critical gap by surveying the current state of the field while advancing a framework for further theoretical development.

Alejandro Portes examines economic sociology’s principal assumptions, key explanatory concepts, and selected research sites. He argues that economic activity is embedded in social and cultural relations, but also that power and the unintended consequences of rational purposive action must be factored in when seeking to explain or predict economic behavior. Drawing upon a wealth of examples, Portes identifies three strategic sites of research — the informal economy, ethnic enclaves, and transnational communities — and he eschews grand narratives in favor of mid-range theories that help us understand specific kinds of social action.

The book shows how the meta-assumptions of economic sociology can be transformed, under certain conditions, into testable propositions, and puts forward a theoretical agenda aimed at moving the field out of its present impasse.

Alejandro Portes is the Howard Harrison and Gabrielle Snyder Beck Professor of Sociology at Princeton University. His books include Legacies: The Story of the Immigrant Second Generation.

"Portes boldly expands the repertoire of economic sociology, bringing in a diverse selection of both classical and contemporary writers who address issues such as power, the informal economy, and transnational communities in innovative and eye-opening ways. Economic Sociology illustrates many of the unique insights provided by sociologists in a field still struggling to liberate itself from the limiting assumptions of neoclassical economics."—Gary Gereffi, Duke University

"The title of this volume may be misleading: political sociologists and sociologists of development, as well as economic sociologists, will turn to this book for clear and insightful expositions of major theoretical debates by one of the discipline's leading figures. Portes shows how his theoretical claims play out in the informal sector, ethnic enclaves, and transnational communities, illustrating his arguments with vivid examples drawn from contemporary scholarship."—Gay Seidman, University of Wisconsin-Madison

"In this carefully crafted book, Portes brings to bear his sophisticated use of sociological theory and his vast empirical knowledge about the multiple intersections between economy and society in the contemporary world. He sheds light on such topics as economic reforms, immigration, social inequality, household consumption, and the informal economy, demonstrating the importance of social capital, institutions, and social class when it comes to understanding socially oriented economic action."—Mauro F. Guillén, University of Pennsylvania

"Compelling and lucid. Portes richly deserves his place as a leader in this field, and this book shows both the breadth and depth of his thinking. One of the book's great strengths is its use of myriad examples to bring concepts to life. Portes's encyclopedic knowledge of the field helps him to make a compelling case for the importance of the sociological perspective."—Frank Dobbin, Harvard University

"This book develops an accessible, eclectic, and contextually rooted approach to economic sociology that offers a viable alternative to neoclassical economics and has a wide range of applications to the broader field of sociology and the social sciences. While it is theoretically refined, at the same time it is not dogmatic, and emphasizes the fact that real-world situations seldom conform to abstract conceptualizations."—Steven J. Gold, Michigan State University

"Portes argues that our understanding of economic activity and our capacity to predict it will be substantially limited if we confine ourselves to key foci of the economics literature, namely individual self-interest as the main motivator of economic action. He consolidates the sociological contribution by focusing on and clarifying its major assumptions, and systematically develops a sociological counter position."—Bryan R. Roberts, University of Texas, Austin