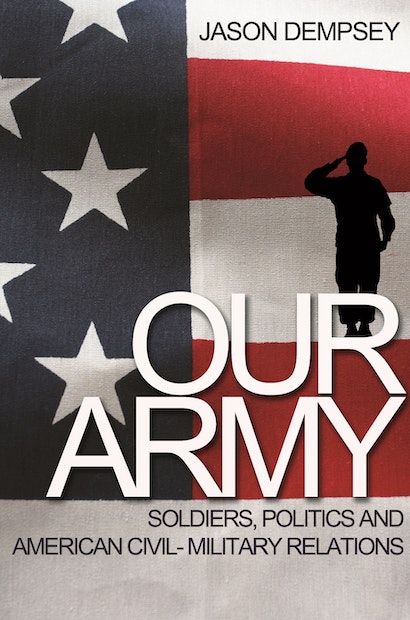 Conventional wisdom holds that the American military is overwhelmingly conservative and Republican, and extremely political. Our Army paints a more complex picture, demonstrating that while army officers are likely to be more conservative, rank-and-file soldiers hold political views that mirror those of the American public as a whole, and army personnel are less partisan and politically engaged than most civilians.


Assumptions about political attitudes in the U.S. Army are based largely on studies focusing on the senior ranks, yet these senior officers comprise only about 6 percent of America’s fighting force. Jason Dempsey provides the first random-sample survey that also covers the social and political attitudes held by enlisted men and women in the army. Uniting these findings with those from another unique survey he conducted among cadets at the United States Military Academy on the eve of the 2004 presidential election, Dempsey offers the most detailed look yet at how service members of all ranks approach politics. He shows that many West Point cadets view political conservatism as part of being an officer, raising important questions about how the army indoctrinates officers politically. But Dempsey reveals that the rank-and-file army is not nearly as homogeneous as we think — or as politically active — and that political attitudes across the ranks are undergoing a substantial shift.

Our Army adds needed nuance to our understanding of a profession that seems increasingly distant from the average American.

Jason K. Dempsey is a lieutenant colonel in the U.S. Army who served in Afghanistan. He has a PhD in political science from Columbia University and is a graduate of the United States Military Academy.

"There is a general perception that US military institutions are heavily dominated by the Republican Party and, consequently, an unacceptable number of army officers have combined their political and professional identities, which has created a sense of discomfort among the American public. Dempsey presents a comprehensive, well-researched assessment of the political and social attitudes of members of the US Army on social and political issues. This in-depth analysis explains the similarities and differences in opinions and attitudes on social and political issues among the military and the civilian population."—Choice

"Jason K. Dempsey's Our Army adds to the work of military sociology in important ways and is useful fodder for thought for soldiers and civilians. . . . Dempsey has written a powerful book that deserves a place on the same shelf as the works of Janowitz and Huntington."—COL Gregory Fontenot, Army Magazine

"Through its careful assessment of results from a unique, original survey instrument, Our Army offers an important corrective to the conventional view of an increasingly conservative, politically active army that threatens to upend established norms of civil-military relations. It offers a wealth of new data for scholars to explore, and it suggests avenues for future research that will further bolster our understanding of the army and its intricate relations with the political branches of government."—Douglas L. Kriner, Public Opinion Quarterly

"Interesting and important. Dempsey presents a wealth of original survey data on the views of army personnel. He shows that soldiers hold views that are not dramatically different from those of the American people as a whole, but that differences between officers and the general public exist on many issues. Dempsey points to the dangers of having the military aligned to one political party."—Ole R. Holsti, professor emeritus, Duke University

"This is the only analysis of a random-sample survey of the U.S. Army that probes in some depth the political attitudes of army personnel. Dempsey shows that the army as a whole is more conservative and Republican than comparable civilian cohorts but, because of the large number of African Americans and a blue-collar enlisted ranks, is not overwhelmingly conservative and Republican. This is a valuable book with one-of-a-kind data that will be a great resource and stimulus for research and debate."—Peter D. Feaver, coauthor of Paying the Human Costs of War