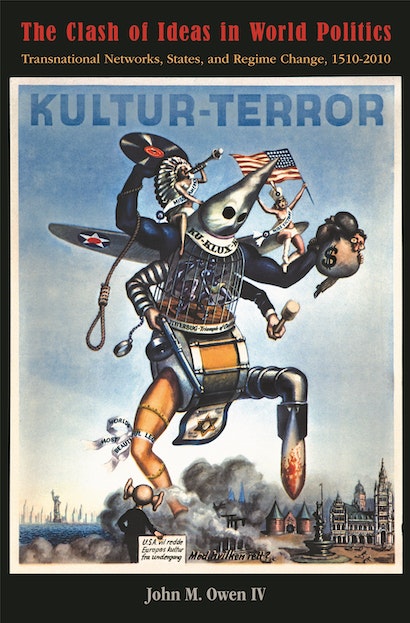 Some blame the violence and unrest in the Muslim world on Islam itself, arguing that the religion and its history is inherently bloody. Others blame the United States, arguing that American attempts to spread democracy by force have destabilized the region, and that these efforts are somehow radical or unique. Challenging these views, The Clash of Ideas in World Politics reveals how the Muslim world is in the throes of an ideological struggle that extends far beyond the Middle East, and how struggles like it have been a recurring feature of international relations since the dawn of the modern European state.


John Owen examines more than two hundred cases of forcible regime promotion over the past five centuries, offering the first systematic study of this common state practice. He looks at conflicts between Catholicism and Protestantism between 1520 and the 1680s; republicanism and monarchy between 1770 and 1850; and communism, fascism, and liberal democracy from 1917 until the late 1980s. He shows how regime promotion can follow regime unrest in the eventual target state or a war involving a great power, and how this can provoke elites across states to polarize according to ideology. Owen traces how conflicts arise and ultimately fade as one ideology wins favor with more elites in more countries, and he demonstrates how the struggle between secularism and Islamism in Muslim countries today reflects broader transnational trends in world history.

John M. Owen IV is associate professor of politics at the University of Virginia.

"The historical narratives Owen employs to test this theory are nuanced, illuminating, and a joy to read."—Peter Liberman, Foreign Affairs

"Owen provides the most compelling explanatory framework to date for examining forcible regime promotions, supported by a convincing historical narrative that sets the bar high for future works on the subject. More importantly, Owen's book is a welcome contribution providing a timely toolbox for both academics and policy analysts to examine the ongoing events in the Middle East and beyond."—Luca Tardelli, International Affairs

"Owen . . . makes use of formidable analytical skills to reveal patterns in 209 instances internationally and demonstrate the use of regime promotion as a strategic weapon. . . . Recommended."—Ellen J. Jenkins, Canadian Journal of History

"[T]he depth of learning that informs the historical aim of Owen's text is proof of the validity of historical work, regardless of the fact that it does not and cannot enable us to make precise predictions."—Jeff Noonan, European Legacy

"This book is a major contribution to the literature on hierarchy in international relations. It empirically demonstrates more convincingly than any other study to date that forcible regime change is a normal tool of statecraft. Owen's focus on the importance of transnational ideological polarization as the primary cause of such activity is an explanation that materialists cannot ignore."—Stephen D. Krasner, Stanford University

"This book is a major contribution to the history and theory of international relations. We were already in debt to John Owen for his excellent, nuanced analysis of the notion that democracies do not fight each other. This volume is far more ambitious and proves that—as in world politics itself—ideas and historical understanding are more important than accumulations of numbers."—Stanley Hoffmann, Harvard University

"John Owen has produced another important book, this one about using force to change regimes in other countries. On a topic soaked with harsh rhetoric and strong emotions, Owen offers historical perspective and serious analysis. His data is striking. It shows that forcible regime changes come in waves, clustered in certain periods, followed by long lulls. Owen helps us understand the logic of this pattern, especially the complex motives of great powers that intervene to change how others are governed."—Charles Lipson, University of Chicago

"This is an ambitious, well-conceived, and important book that takes on an extremely large topic across history and across theoretical perspectives. It places the current 'war of ideas' between Islam and the West within a wider context of the recurrence of such ideological clashes in world politics. One of Owen's crucial insights is that these conflicts are closer to the norm than the exception."—Marc Lynch, author of Voices of the New Arab Public

"This book answers an extremely timely question: why do states use military force to change the governing regimes of other states? Analyzing five centuries of international history, Owen explains how ideological divisions shape cooperation and conflict in world politics. This important, accessible, and convincing work contains crucial insights for academics and policy analysts—whether they seek to understand the past, make sense of the present, or shape the future."—Daniel H. Nexon, author of The Struggle for Power in Early Modern Europe