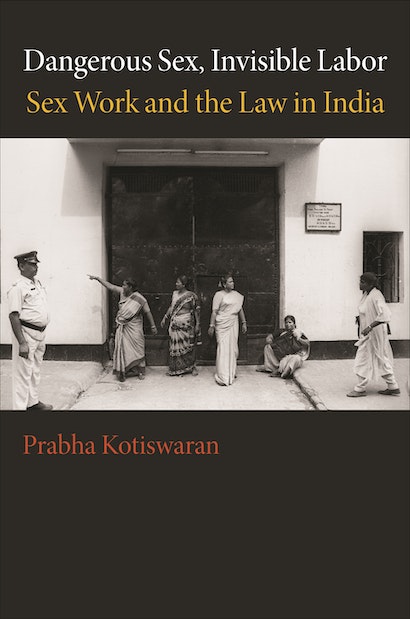 Popular representations of third-world sex workers as sex slaves and vectors of HIV have spawned abolitionist legal reforms that are harmful and ineffective, and public health initiatives that provide only marginal protection of sex workers’ rights. In this book, Prabha Kotiswaran asks how we might understand sex workers’ demands that they be treated as workers. She contemplates questions of redistribution through law within the sex industry by examining the political economies and legal ethnographies of two archetypical urban sex markets in India.


Kotiswaran conducted in-depth fieldwork among sex workers in Sonagachi, Kolkata’s largest red-light area, and Tirupati, a temple town in southern India. Providing new insights into the lives of these women — many of whom are demanding the respect and legal protection that other workers get — Kotiswaran builds a persuasive theoretical case for recognizing these women’s sexual labor. Moving beyond standard feminist discourse on prostitution, she draws on a critical genealogy of materialist feminism for its sophisticated vocabulary of female reproductive and sexual labor, and uses a legal realist approach to show why criminalization cannot succeed amid the informal social networks and economic structures of sex markets. Based on this, Kotiswaran assesses the law’s redistributive potential by analyzing the possible economic consequences of partial decriminalization, complete decriminalization, and legalization. She concludes with a theory of sex work from a postcolonial materialist feminist perspective.

Prabha Kotiswaran is lecturer in law at the School of Oriental and African Studies at the University of London.

"Dangerous Sex, Invisible Labor is a book that deserves respect for its painstaking efforts to present a view 'from below', and to incorporate the voice of the sex worker herself, not only that of the slave but also of the self-employed prostitute-housewife who earns much more than her unsuspecting husband. It provides a wealth of information about the organisation of prostitution and the law in India—a field with many keep-out signs for 'outsiders.' Only a courageous and sensitive researcher can find a way to get in."—Times Higher Education

"[F]ascinating and illuminating. . . . Dangerous Sex, Invisible Labor offers a sincere effort in presenting a genuinely contextualized understanding of sex work from sex worker's perspectives, and avoids abstractionist theorizing. This book offers a great thinking ground for readers by creating a remarkably large space for them to do their own theorizing."—Raadhika Gupta, Harvard Journal of Law & Gender

"Drawing on perspectives of the sex worker movement in India, Kotiswaran advocates decriminalization of sex work along with self-organization in order for sex workers to realize their rights."—Choice

"Kotiswaran's sophisticated and informative theoretical and legal perspective, while occasionally beyond the main boundaries of anthropology, sheds a great deal of light on a difficult and 'invisible' subject, and if it does not decisively point the way, it at least elucidates the contours and contradictions in the 'elusive quest for justice' for women performing sex work."—Jack David Eller, Anthropology Review Database

"Kotiswaran's book is a welcome addition to the literature on sex work. . . . [The] book is exceptional in the way that it weaves depth of theory with integrity of field work. Kotiswaran not only leaves the reader with many new thoughts but also makes material feminism and legal ethnography a pleasure to engage with."—Sameena Dalwai, Social & Legal Studies

"This groundbreaking study brilliantly maps feminist ideas that have powerfully influenced law reform around sex work and trafficking. Kotiswaran convincingly makes the case that the welfare of sex workers in the developing world depends on complex factors that can be identified only through a local, legal realist account, and which have been virtually ignored by feminist theory. Read this book: it will challenge what you think you know."—Janet Halley, Harvard Law School

"Dangerous Sex, Invisible Labor makes a great contribution to feminist theory as it takes on the contentious debate within feminism between abolitionist and sex worker perspectives on trafficking. It offers a clear-eyed, judicious analysis of these positions and that of an emerging middle path, enriched by the insights provided by postcolonial feminism and Kotiswaran's fascinating ethnography on sex work in India."—Sally Engle Merry, New York University

"This book is fascinating, provocative, and likely to change the reader's ideas about sex work in the global south, about sex work in general, and about feminist responses to sex work. In a word, it is brilliant."—Duncan Kennedy, Harvard Law School

"Prabha Kotiswaran maps, in gifted yet poignant ways, the geographies of injustice in the third-world sex trade. Speaking to specific Indian social, political, and constitutional contexts, she fully addresses the obscenity of global sex trafficking, as well as interlocutes all our rather fond human-rights-friendly yet historically effete discourses. Kotiswaran tests and teases new insights arising from taking seriously the voices of suffering women."—Upendra Baxi, professor emeritus, University of Warwick

"A significant contribution to feminist theorization and legal studies of sex work. Taking up the polarized debate about sex work, Kotiswaran powerfully conveys the complexity of sex workers' experiences on the ground. A major strength of her analysis is how it highlights the need to understand the paradoxical effects of legal reform by contextualizing its realization in the web of civil rules, social norms, enforcement cycles, and market forces."—Sealing Cheng, Wellesley College