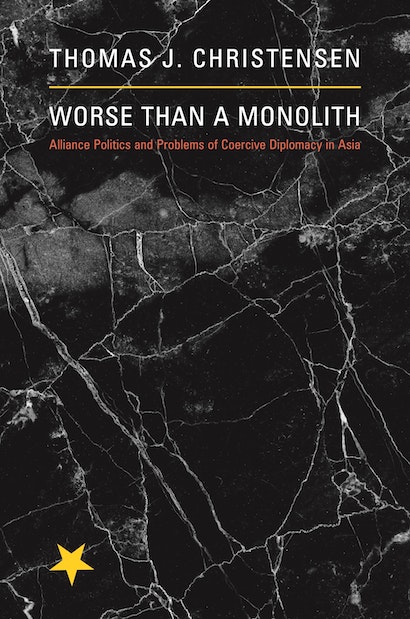 In brute-force struggles for survival, such as the two World Wars, disorganization and divisions within an enemy alliance are to one’s own advantage. However, most international security politics involve coercive diplomacy and negotiations short of all-out war. Worse Than a Monolith demonstrates that when states are engaged in coercive diplomacy — combining threats and assurances to influence the behavior of real or potential adversaries — divisions, rivalries, and lack of coordination within the opposing camp often make it more difficult to prevent the onset of conflict, to prevent existing conflicts from escalating, and to negotiate the end to those conflicts promptly. Focusing on relations between the Communist and anti-Communist alliances in Asia during the Cold War, Thomas Christensen explores how internal divisions and lack of cohesion in the two alliances complicated and undercut coercive diplomacy by sending confusing signals about strength, resolve, and intent. In the case of the Communist camp, internal mistrust and rivalries catalyzed the movement’s aggressiveness in ways that we would not have expected from a more cohesive movement under Moscow’s clear control.


While recognizing clear differences between the Cold War and post-Cold War environments, he investigates how efforts to adjust burden-sharing roles among the United States and its Asian security partners have complicated U.S.-China security relations since the collapse of the Soviet Union.

Thomas J. Christensen is the William P. Boswell Professor of World Politics of Peace and War and Director of the China and the World Program at Princeton University's Woodrow Wilson School. He is the author of Useful Adversaries (Princeton). From 2006-2008, he served as Deputy Assistant Secretary of State for East Asian and Pacific Affairs.

"I am sure that there will be many who will dispute Christensen's emphasis on alliance politics as the major factor in recent U.S.-Asian diplomatic history. Personally, I find his evidentiary base persuasive and his analysis attractively parsimonious. . . . [A]n intelligent, accessible, and significant work."—James W. White, American Diplomacy

"The [book] is a sumptuous array of original analysis and rich detail, backed up by judicious use of archival and secondary sources in both Chinese and English. . . . [F]or anyone teaching a college-level course on U.S.-East Asia relations or East Asian politics, the book should be required reading. . . . Christensen's Worse than a Monolith is a major contribution to Cold War studies and U.S.-East Asia relations."—Sung-Yoon Lee, New Global Studies

"A great scholarly book is not one that offers ultimate answers to all the questions that it has raised and tried to deal with; it is one that asks meaningful questions and, in coming up with answers to them, serves as a new point of departure for scholarly discussion and intellectual exchange. Christensen's is exactly such a book, and it is in this spirit that I write this review and put forward the above suggestions. This book surely will be read, discussed and, at times, debated by scholars for a long time to come."—Chen Jian, H-Diplo/ISSF Roundtable Reviews

"Christensen's volume greatly enriches our understanding of alliance politics and deterrence in Asia during the Cold War. It is thorough in its research, clear in its presentation, rich in its insight, and thought-provoking in its interpretations."—Qiang Zhai, H-Diplo/ISSF Roundtable Reviews

"Christensen's book is an important contribution to the burgeoning literature on East Asian security. He provides a counterintuitive theoretical claim that alliance cohesion may be more stable than alliance disunity, and provides deeply researched evidence from the Cold War in East Asia to back up his claims. Careful, thoughtful, and always stimulating, this book will be an important addition to our understanding of historical and contemporary problems in East Asian security."—David Kang, Political Science Quarterly

"The main strength of Worse than a Monolith lies in the skill with which Christensen uses his alliance politics framework to lend welcome analytical traction especially to explaining the Communist side of the conflict at a time when there is arguably little genuinely new to add to the historiography of the 'hot Asian wars' of the Cold War."—Evelyn Goh, International Relations of the Asia-Pacific

"[T]he book is well written, and chapters Two through Seven will certainly interest any student of Cold War or East Asian history."—Walter Brummund, III, Journal of International Law and Politics

"Christensen is a first-rate expert on Asian politics, American foreign policy, and international relations theory. His new book is a major contribution to all three fields and uses meticulous historical analysis to show how and why internal alliance dynamics have repeatedly made life difficult and dangerous for everyone. This is what qualitative security studies is supposed to look like—and an excellent demonstration of why it is important."—Gideon Rose, Foreign Affairs

"Common sense and much of international relations theory suggest that it is in a country's interest for its enemies to be at each other's throats. With careful reasoning and rich research, Christensen shows that this is not so and that the Sino-Soviet split greatly complicated American diplomacy. This book is central to our understanding of the Cold War, East Asia, and international politics theory."—Robert Jervis, Columbia University

"This first-rate book provides rich and nuanced detail about the interactive effects of alliance politics on all sides. Christensen is one of the few international relations scholars who can theorize with the best of the political scientists and write history like a historian."—Alastair Iain Johnston, Harvard University

"Worse Than a Monolith offers a clear, causal explanation of how internal alliance dynamics interacts with external deterrence to influence the effectiveness of coercive diplomacy. The author makes clever use of history to argue that disunity, lack of coordination, and intra-alliance rivalry increase the likelihood that regional conflicts will occur and existing conflicts will escalate."—Suisheng Zhao, University of Denver