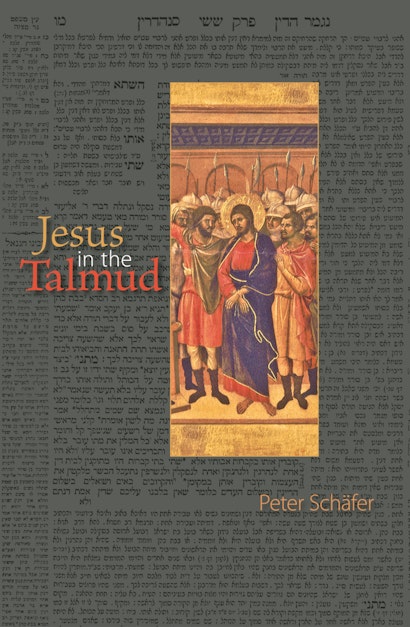 Scattered throughout the Talmud, the founding document of rabbinic Judaism in late antiquity, can be found quite a few references to Jesus — and they’re not flattering. In this lucid, richly detailed, and accessible book, Peter Schäfer examines how the rabbis of the Talmud read, understood, and used the New Testament Jesus narrative to assert, ultimately, Judaism’s superiority over Christianity.


The Talmudic stories make fun of Jesus’ birth from a virgin, fervently contest his claim to be the Messiah and Son of God, and maintain that he was rightfully executed as a blasphemer and idolater. They subvert the Christian idea of Jesus’ resurrection and insist he got the punishment he deserved in hell — and that a similar fate awaits his followers.


Schäfer contends that these stories betray a remarkable familiarity with the Gospels — especially Matthew and John — and represent a deliberate and sophisticated anti-Christian polemic that parodies the New Testament narratives. He carefully distinguishes between Babylonian and Palestinian sources, arguing that the rabbis’ proud and self-confident countermessage to that of the evangelists was possible only in the unique historical setting of Persian Babylonia, in a Jewish community that lived in relative freedom. The same could not be said of Roman and Byzantine Palestine, where the Christians aggressively consolidated their political power and the Jews therefore suffered.


A departure from past scholarship, which has played down the stories as unreliable distortions of the historical Jesus, Jesus in the Talmud posits a much more deliberate agenda behind these narratives.

Peter Schäfer is Ronald O. Perelman Professor of Judaic Studies and Director of the Program in Judaic Studies at Princeton University. His books include Mirror of His Beauty: Feminine Images of God from the Bible to the Early Kabbalah (Princeton) and Judeophobia: Attitudes toward the Jews in the Ancient World, which has been translated into several languages.

"Schäfer's fine new book should be of interest to a wide audience, and not only to specialists in the field of the historical interaction of Judaism and Christianity in late antiquity (who will be right to devour it). . . . Schäfer's book tells a fascinating story. . . . His great scholarship now provides Jews and Christians interested in developing a new and better relationship with a way to work through many of the hateful things that we have said about each other in the past, but without pretending that this bad past was not as bad as it really was or that it can simply be forgotten. . . . The sources that Schäfer adduces are virulent and dangerous, but his analysis of them leaves one unexpectedly full of hope."—David Novak, New Republic

"In the talmudic references to Jesus . . . Schäfer persuasively finds sophisticated 'counternarratives that parody the New Testament stories,' composed by Jews who evinced a precise knowledge of the New Testament. The true accomplishment of Jesus in the Talmud is to show how certain talmudic passages are actually subtle rereadings of the New Testament, 'a literary answer to a literary text.' With considerable skill, Schäfer weaves these together until they can be seen to form an intricate theological discourse that prefigures the disputations between Jews and Christians in the Middle Ages."—Benjamin Balint, First Things

"Meticulously researched and argued as well as clearly and accessibly written, this most intriguing—albeit radical—book is sure to spark interest, debate, and controversy. An essential purchase for academic religion collections and theological libraries."—Library Journal

"In [this] book Schäfer has proven himself not only a formidable scholar of ancient and medieval Jewish texts . . . but also a talented author from whose hands the text flows like the water to which the rabbis likened the Torah."—Galit Hasan-Rokem, Jewish Quarterly Review

"Peter Schafer deserves great merit for having taken up a subject whose reexamination has been overdue for a long time already and that is of major interest to New Testament scholars, Talmudists, and historians of ancient Judaism alike...The great achievement of this book is that it reopens the discussion of texts that are of greatest significance for the study of the relationship of Judaism and Christianity in antiquity and the early Middle Ages. It presents the Jewish intellectual elite in a new light, as active respondents to Christian claims and allegations and forceful combatants in the Christian-Jewish dispute."—Catherine Hezser, Review of Biblical Literature

"Schafer's excellent study shows that, by ridiculing fundamental Christian claims, Babylonian Jewry rejected any notion that the old covenant had been superseded by the new, Judaism had nothing for which to reproach itself: its superiority over Christianity was incontestable."—Anthony Phillips, Church Times

"Peter Schäfer...provides a sophisticated treatment of the subject of Jesus and other figures in the New Testament in Talmudic literature. This subject has a long history, but have never been undertaken with the kind of rigor and sensitivity to contextual factors, including the differences between the evidence available in the Babylonian versus Jerusalem versions...Clear and accessible reading for the non-specialist, this is a careful, scholarly treatment that sets the agenda for future studies"—Jewish Book World

"One of the greatest Hebrew scholars, Peter Schäfer, published a book on a very controversial and difficult subject—Jesus in the Talmud. Jesus in the Talmud is a work of great value. Although the author declares that the book is not a scholarly treatise, but only a kind of extensive essay, the investigation is thorough and all its theses are excellently and fully argued."—Maciej Tomal, Palamedes

"Peter Schäfer's Jesus in the Talmud is already being picked up by anti-Semitic Web sites as proof that Judaism harbors blasphemous beliefs about Jesus. Yet, it is an important book by a meticulous scholar, the head of Princeton's Judaic studies program. It is also a truthful book and should be received in a spirit of truthfulness."—David Klinghoffer, Hadassah Magazine

"Schäfer bases his clearly written and exquisitely informed work on a collection of the fragmented texts about Jesus from the heart of the rabbinic period, a cluster of passages he assembles from material scattered throughout the Jerusalem and Babylonian Talmuds and contemporaneous rabbinic literature. The simple gathering of these newly translated texts in one place makes the book an excellent English-language resource for researchers and laypersons alike."—Stephen Hazan Arnoff, Haaretz

"This remarkable monograph is required reading for anyone interested in the reception of the NT in rabbinic literature."—M. J. Geller, Journal for the Study of the Old Testament

"[C]ertainly the best modern study of this topic."—Simon Gathercole, Journal for the Study of the New Testament

"This is a very interesting book, and the author's arguments are both logical and unique."—W. Pretorius, Studia Historiae Ecclesiasticae

"Schafer's erudite sailing through the 'sea of Talmud' is evident on every page; and, to the extent his thesis is correct, he relocates Talmudic Jesus tradition from Jesus research in the first century to Jewish-Christian relations in late antiquity."—Michael A. Daise, Journal for the Study of the Historical Jesus

"Peter Schäfer's remarkable volume on Jesus' enigmatic place in Talmudic literature is a work of erudition and depth. It will bring deeper knowledge to students and teachers of Judaism and Christianity."—Elie Wiesel

"When the premiere 'Christian-Hebraist' of our era turns his attention to Jesus in the Talmud, everyone interested in ancient history and modern interreligious dialogue must take notice. Peter Schäfer carefully sifts through all of the literary evidence from that great monument of late-fifth-century Babylonian Jewish culture with fresh eyes and striking insights. His final chapter, focused on why the Babylonian Talmud could sustain such anti-Christian rhetoric, is a scholarly tour de force."—Rabbi Burton L. Visotzky, Jewish Theological Seminary

"From the opening pages of Jesus in the Talmud the reader senses that something new and important is about to be unfolded. It is, and the unfolding of it is pure Schäfer: straightforward and plain-speaking, argued densely, yet with great clarity, provocative, but finally persuasive. And yes, exciting too."—F. E. Peters, author of The Children of Abraham

"This is an exceptionally engaging book. Professor Schäfer has subjected to close scrutiny all the passages relating to Jesus in the Talmudic and other rabbinic literature produced in Palestine and in Babylonia in late antiquity. His aim is to use them to discover the rabbis' attitude to Christianity. While the force of the argument suggests this book should be mainly of interest to students of rabbinic Judaism, I believe that the subject matter will ensure that it has a much wider readership. It sheds light in places on the way the gospel traditions evolved particularly in Palestinian and Syriac-speaking Christianity."—Nicholas de Lange, University of Cambridge