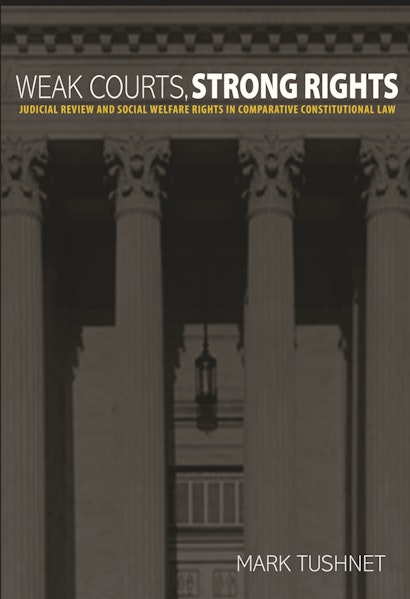 Unlike many other countries, the United States has few constitutional guarantees of social welfare rights such as income, housing, or healthcare. In part this is because many Americans believe that the courts cannot possibly enforce such guarantees. However, recent innovations in constitutional design in other countries suggest that such rights can be judicially enforced — not by increasing the power of the courts but by decreasing it. In Weak Courts, Strong Rights, Mark Tushnet uses a comparative legal perspective to show how creating weaker forms of judicial review may actually allow for stronger social welfare rights under American constitutional law.

Mark Tushnet is the William Nelson Cromwell Professor of Law at Harvard Law School. His many books include The New Constitutional Order and Taking the Constitution Away from the Courts (both Princeton). He is a fellow of the American Academy of Arts and Sciences.

"In this study of various theoretical issues of concern to students of comparative constitutional law, Tushnet has done a remarkable job of analyszing and comparing existing forms of judicial review....Tushnet's impeccable research leads us through varied constitutional systems including, for example, Argentina, Canada, Great Britain, and Ireland. This is constitutional scholarship at its best."—R.J. Steamer, Choice

"Tushnet puts flesh on the bones of the claim that constitutionally guaranteed social rights, judicially enforced, are already a part of the jurisprudence of the United States and other countries of interest. He takes this argument some distance beyond where any other scholar has taken it, so far as I know, and he does so with considerable refinement. This book gives a full and strong manifestation of the style, intelligence, and learning that have earned Tushnet his eminence as a scholar of American constitutional law and comparative constitutionalism."—Frank I. Michelman, Harvard Law School

"This is an important contribution to an important debate in the United States about the possibility and prospects for the courts to play a more modest role in politics and policy. Tushnet demonstrates that, by a nice twist, a more modest judicial role could lead to a more robust set of social rights. And his comparative cases show that this is not purely theoretical, but that it has worked out to some degree in other systems."—Gordon Silverstein, University of California, Berkeley