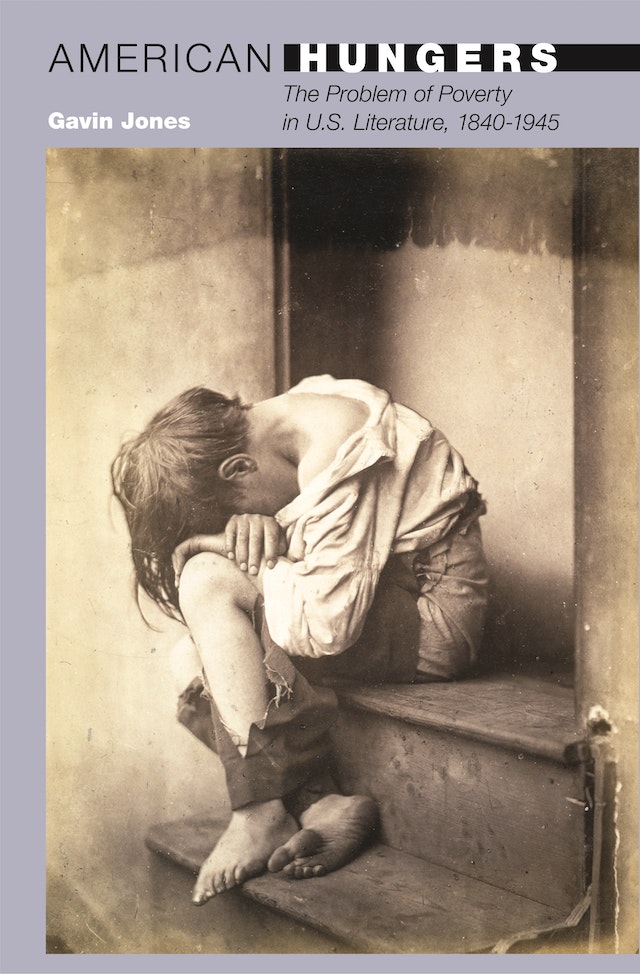 Social anxiety about poverty surfaces with startling frequency in American literature. Yet, as Gavin Jones argues, poverty has been denied its due as a critical and ideological framework in its own right, despite recent interest in representations of the lower classes and the marginalized. These insights lay the groundwork for American Hungers, in which Jones uncovers a complex and controversial discourse on the poor that stretches from the antebellum era through the Depression.


Reading writers such as Herman Melville, Theodore Dreiser, Edith Wharton, James Agee, and Richard Wright in their historical contexts, Jones explores why they succeeded where literary critics have fallen short. These authors acknowledged a poverty that was as aesthetically and culturally significant as it was socially and materially real. They confronted the ideological dilemmas of approaching poverty while giving language to the marginalized poor — the beggars, tramps, sharecroppers, and factory workers who form a persistent segment of American society. Far from peripheral, poverty emerges at the center of national debates about social justice, citizenship, and minority identity. And literature becomes a crucial tool to understand an economic and cultural condition that is at once urgent and elusive because it cuts across the categories of race, gender, and class by which we conventionally understand social difference.

Gavin Jones is professor of English at Stanford University. He is the author of Strange Talk: The Politics of Dialect Literature in Gilded Age America.

"Jones persuasively argues that the time has come for literary theory to address the issue of poverty . . . in US literature. Rather than focusing on the cultural identities of the underprivileged, the author calls for a 'theory of poverty' that will highlight and address the political and social injustices associated with the economically disadvantaged. . . . Jones posits that the work of Herman Melville, Theodore Dreiser, Edith Wharton, James Agee, and Richard White most accurately portrays and foregrounds poverty. . . . His readings show how these writers succeeded in 'opening up the complexities and contradictions' of poverty, which contemporary literary theory fails to do. In short, Jones calls for a synthesis between discussion of race/gender/class and discussion of poverty, which often shapes identities within race, gender, and class categories."—B. M. McNeal, Slippery Rock University of Pennsylvania, for, CHOICE

"Jones's readings are detailed and richly informed, and his discussions of the social-scientific background—the shift from moral to biological to psychological explanations of poverty—provide a valuable history, one that should interest critics regardless of their stance toward identity politics."—Twentieth Century Literature

"The main and considerable strength of Jones's book is its theoretical contribution, which is located in the introduction. The body of the volume also makes intriguing, if not always completely persuasive, arguments."—Michael Tavel Clarke, American Quarterly

"Gavin Jones's American Hungers is a major contribution to the critical debate about literary constructions of poverty in America across epochs; or rather, the book redefines the terms for this debate in such a way that establishes poverty as a valid subject of discussion in its own right, no longer a mere addition to class, race or gender criticism. Even though Jones writes only about five major texts of American literature, the scope of his presentation is impressive, with insights into cultural, economic, ideological, psychological, and ethical complexities. . . . If poverty ever becomes a category capable of creating a distinct tradition of critical analysis, American Hungers will undeniably be one of the fundamental works of this tradition."—Marek Paryz, European Journal of American Studies

"[A] commendable, daring attempt at providing an adequate theoretical framework for a cultural-sociological discourse on pauperism. . . . Jones offers an insightful vision. . . . [T]he book undoubtedly challenges our received views and notions. . . . Engaging and polemical, its topicality cannot be overstated in the context of the current economic scene of a global market marred by recession."—Adriana Neagu, ABC Journal

"American Hungers is a valuable, important, paradigm shifting book that should be read by everyone with an interest in American literature of the later nineteenth and early twentieth centuries, especially by anyone claiming a critical interest in relations of class and power in American culture."—Carol Loranger, Studies in American Naturalism

"Jones literary 'theory of poverty' must be considered one of the most groundbreaking and at the same time nuanced interventions into theories of class. His theory of poverty as a state of being dialectically shaped by economic, structural and non-material, individual conditions challenges us to recognize representations of poverty in their entire complexity. Implicitly only, he also challenges us to interrogate the complexities of poverty in the real world—and possibly act upon our insights."—Birte Christ, Journal of Literary Theory

"'Race' and 'class' have circled around each other for the past ten years without yet producing a convincing dialectical synthesis. American Hungers is the most intense, impassioned, and—in sum—important attempt to produce such a synthesis that I know of. While its prose and the general shape of its arguments are crystal clear, it is a demanding book in the best sense, a call to literary and cultural criticism to see things differently."—Mark McGurl, UCLA