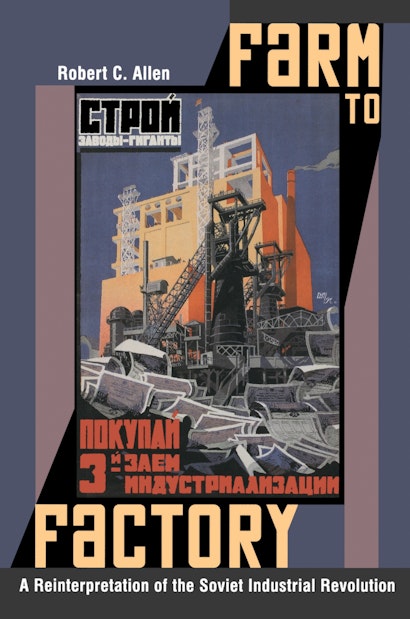 To say that history’s greatest economic experiment — Soviet communism — was also its greatest economic failure is to say what many consider obvious. Here, in a startling reinterpretation, Robert Allen argues that the USSR was one of the most successful developing economies of the twentieth century. He reaches this provocative conclusion by recalculating national consumption and using economic, demographic, and computer simulation models to address the “what if” questions central to Soviet history. Moreover, by comparing Soviet performance not only with advanced but with less developed countries, he provides a meaningful context for its evaluation.

Although the Russian economy began to develop in the late nineteenth century based on wheat exports, modern economic growth proved elusive. But growth was rapid from 1928 to the 1970s — due to successful Five Year Plans. Notwithstanding the horrors of Stalinism, the building of heavy industry accelerated growth during the 1930s and raised living standards, especially for the many peasants who moved to cities. A sudden drop in fertility due to the education of women and their employment outside the home also facilitated growth.

While highlighting the previously underemphasized achievements of Soviet planning, Farm to Factory also shows, through methodical analysis set in fluid prose, that Stalin’s worst excesses — such as the bloody collectivization of agriculture — did little to spur growth. Economic development stagnated after 1970, as vital resources were diverted to the military and as a Soviet leadership lacking in original thought pursued wasteful investments.

Robert C. Allen is Professor of Economic History at Oxford University and a Fellow of the Royal Society of Canada. He is the author of Enclosure and the Yeoman.

"Robert Allen considers . . . contentions about the costs and achievements of industrialization and the collectivization of agriculture in the USSR."—Paul Josephson, Technology and Culture

"This well-written book will be quite controversial, finding as it does something good about the Soviet system when all others are saying the opposite. Allen's main conclusions—that the pre-revolutionary economy would not have done well had it been continued, that collectivization was not a disaster, and that there was considerable merit in Stalinist investment strategies—represent a lone voice in the wilderness that needs to be heard."—Paul Gregory, author of The Political Economy of Stalinism and Before Command: The Russian Economy from Emancipation to Stalin

"A magnificent accomplishment. This is a major work of synthetic research, one that will be disputed, debated, and discussed for many years to come. It is a carefully crafted piece of painstaking quantitative research but also a searching and provocative study of one of the most perplexing episodes in European history. Allen's book will be read by anyone—historian, social scientist, political analyst—interested in the deep and complex issues posed by the greatest failed experiment in the history of the human race."—Joel Mokyr, author of The Gifts of Athena and series editor, Princeton Economic History of the Western World