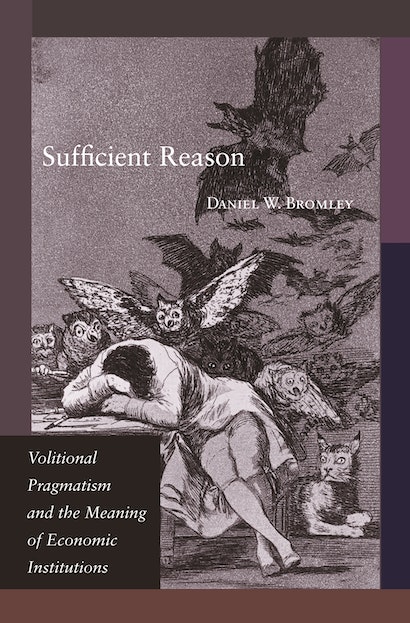 In the standard analysis of economic institutions — which include social conventions, the working rules of an economy, and entitlement regimes (property relations) — economists invoke the same theories they use when analyzing individual behavior. In this profoundly innovative book, Daniel Bromley challenges these theories, arguing instead for “volitional pragmatism” as a plausible way of thinking about the evolution of economic institutions. Economies are always in the process of becoming. Here is a theory of how they become.


Bromley argues that standard economic accounts see institutions as mere constraints on otherwise autonomous individual action. Some approaches to institutional economics — particularly the “new” institutional economics — suggest that economic institutions emerge spontaneously from the voluntary interaction of economic agents as they go about pursuing their best advantage. He suggests that this approach misses the central fact that economic institutions are the explicit and intended result of authoritative agents — legislators, judges, administrative officers, heads of states, village leaders — who volitionally decide upon working rules and entitlement regimes whose very purpose is to induce behaviors (and hence plausible outcomes) that constitute the sufficient reasons for the institutional arrangements they create.


Bromley’s approach avoids the prescriptive consequentialism of contemporary economics and asks, instead, that we see these emergent and evolving institutions as the reasons for the individual and aggregate behavior their very adoption anticipates. These hoped-for outcomes comprise sufficient reasons for new laws, judicial decrees, and administrative rulings, which then become instrumental to the realization of desired individual behaviors and thus aggregate outcomes.

Daniel W. Bromley is Anderson-Bascom Professor of Applied Economics at the University of Wisconsin, Madison.

"At last, someone has written a hard-hitting demonstration that formulating the problems of economic policy in the 'old institutionalist' framework of analysis yields far greater insights than do attempts to frame these problems of achieving 'economic efficiency'. Daniel Bromley has written such a book: Sufficient Reason . . . and it should be widely read by both the supporters and critics of environmental economics."—Bryan Norton, Environmental Values

"In the absence of a consensus there is still the ongoing debate over the making of policy and judgments concerning welfare. To that debate, Bromley's book is a welcome and valuable addition."—Malcolm Rutherford, Journal of Economic Methodology

"Professor Bromley has provided us with a very stimulating and useful treatment of the economics of institutions. In doing so, he has filled a significant gap in a literature too often caught up in the 'either-or' of orthodoxy and heterodoxy."—Steven G. Medema, University of Colorado at Denver

"We all know that welfare economics is far more than cost-benefit analysis; but few economists have ventured beyond. Dan Bromley's new book, Sufficient Reason, does so, and shows how pragmatism can help us in applying economics to policy. The result is a challenging and insightful foundation for a new institutional welfare economics."—David Colander, Middlebury College