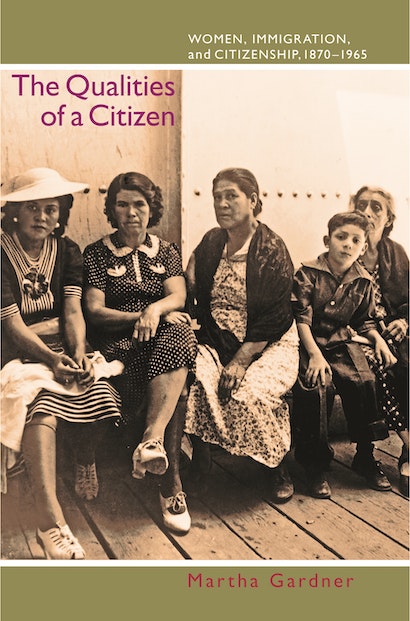 The Qualities of a Citizen traces the application of U.S. immigration and naturalization law to women from the 1870s to the late 1960s. Like no other book before, it explores how racialized, gendered, and historical anxieties shaped our current understandings of the histories of immigrant women. The book takes us from the first federal immigration restrictions against Asian prostitutes in the 1870s to the immigration “reform” measures of the late 1960s. Throughout this period, topics such as morality, family, marriage, poverty, and nationality structured historical debates over women’s immigration and citizenship.


At the border, women immigrants, immigration officials, social service providers, and federal judges argued the grounds on which women would be included within the nation. As interview transcripts and court documents reveal, when, where, and how women were welcomed into the country depended on their racial status, their roles in the family, and their work skills. Gender and race mattered.


The book emphasizes the comparative nature of racial ideologies in which the inclusion of one group often came with the exclusion of another. It explores how U.S. officials insisted on the link between race and gender in understanding America’s peculiar brand of nationalism. It also serves as a social history of the law, detailing women’s experiences and strategies, successes and failures, to belong to the nation.

Martha Gardner is Assistant Professor of History at DePaul University.

"Martha Gardner's full and richly detailed book . . . is an insightful analysis of the application of United States immigration and citizenship law to women across a broad spectrum of classes and races between 1870 and the late 1960s. . . . Gardner's devotion to her sources, evident in the stunning details she provides, makes the history come alive."—Beatrice McKenzie, Journal of American Ethnic History

"This book fills a huge gap in the scholarly literature. Not only is the subject an important one, but the research base is excellent. Gardner wisely decided to work directly with immigration files—a surprisingly little used, and wonderfully rich, group of historical sources—and to include both East and West Coast immigrants. The Qualities of a Citizen will appeal to scholars across the humanities, social sciences, and legal fields, as well as to the general reader."—Peggy Pascoe, University of Oregon

"The Qualities of a Citizen offers important new insights regarding the historical construction of national identity and contributes to the burgeoning field of border studies. It offers a useful and important contribution to the literatures of immigration history and women's history."—Sarah Deutsch, Duke University