Getting inside the heads of the developing world’s dictators, warlords, and corrupt politicians 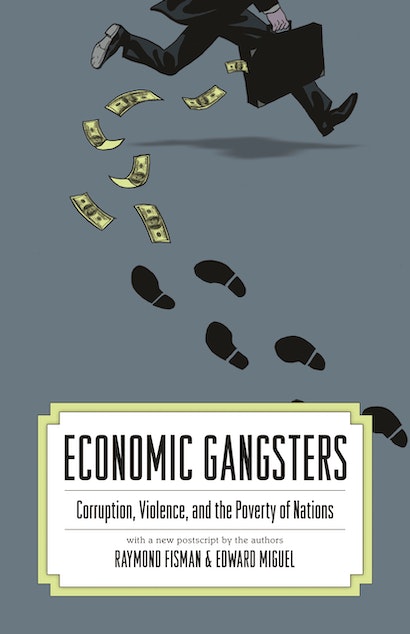 Meet the economic gangster. He’s the United Nations diplomat who double-parks his Mercedes on New York City streets at rush hour because the cops can’t touch him—he has diplomatic immunity. He’s the Chinese smuggler who dodges tariffs by magically transforming frozen chickens into frozen turkeys. The dictator, the warlord, the unscrupulous bureaucrat who bilks the developing world of billions in aid. The calculating crook who views stealing and murder as just another part of his business strategy. And, in the wrong set of circumstances, he might just be you.

In Economic Gangsters, Raymond Fisman and Edward Miguel take readers into the secretive, chaotic, and brutal worlds inhabited by these lawless and violent thugs. Join these two sleuthing economists as they follow the foreign aid money trail into the grasping hands of corrupt governments and shady underworld characters. Spend time with ingenious black marketeers as they game the international system. Follow the steep rise and fall of stock prices of companies with unseemly connections to Indonesia’s former dictator. See for yourself what rainfall has to do with witch killings in Tanzania—and more.

Fisman and Miguel use economics to get inside the heads of these “gangsters,” and propose solutions that can make a difference to the world’s poor—including cash infusions to defuse violence in times of drought, and steering the World Bank away from aid programs most susceptible to corruption.

In a new postscript, the authors look at how economists might use new tools to better understand, and fight back against, corruption and violence in the aftermath of the 2008 financial crisis. Take an entertaining walk on the dark side of global economic development with Economic Gangsters.

"Smart and eminently readable . . . Fisman and Miguel try to do for global poverty what [Steven] Levitt did for domestic economic issues. For example, they look at the way 'witches' are killed in Tanzania whenever rainfalls fail and food is scarce; it turns out that families try to save food by executing less-productive elderly women as witches."—Nicholas Kristof, NYTimes.com's On the Ground blog

"Columbia's Ray Fisman and Berkeley's Ted Miguel are two of the most creative and interesting economists I know. Each is driven to better understand just what keeps poor countries in poverty, and they are willing to try some pretty amazing research strategies to figure it out. They have traveled far and wide—both geographically and intellectually—and in their beautifully written book Economic Gangsters, they shine a well-honed statistical spotlight on the twin evils of corruption and violence. The book is a dead-set page turner, and there's nothing more fun than feeling like you are next to them as they travel the world in search of the scoundrels responsible for so much suffering."—Justin Wolfers, Freakonomics blog

"[Fisman and Miguel] avoid academic jargon and write for a general audience in explaining how economists study the problem of pervasive endemic poverty. . . . Reminiscent of other lighter looks at economics, e.g., Steven D. Levitt and Stephen J. Dubner's Freakonomics and Tim Harford's The Undercover Economist, this book makes developmental economics both entertaining and accessible to a broad audience."—Library Journal

"In this surprisingly spry read, authors and economics professors Fisman and Miguel tackle economic development issues in Africa, Asia, and Latin America, beginning with the question: after decades of independence and billions in foreign aid, why are so many developing countries still mired in poverty? . . . This thorough, thoughtful guide to global corruption is an engaging, disarmingly upbeat read for fans of Freakonomics and Malcolm Gladwell."—PublishersWeekly.com

"Like many a good television sleuth (think Jessica Fletcher or Ellery Queen), [Fisman] is also an author, even if there the similarity ends. He has written Economic Gangsters and in it he and co-author Edward Miguel trace the steps oft eh corrupt using not DNA or forensic science but data and statistics. Theirs is a treatment to the truism that when you are looking for clues, follow the money. The book gives half a dozen examples of how data can be used to find corrupt behaviour, particularly in developing countries."—Parminder Bahra, The Times (of London)

"In their new book Economic Gangsters, authors Raymond Fisman and Edward Miguel try to understand what motivates people to break the law, the consequences of their actions and the implications for prevention. Their effort stands out among many others for their cool-headed application of economic cost-benefit analysis to this shady human behavior."—Shanghai Daily

"Raymond Fisman and Edward Miguel, two young rising stars of economics, apply the Freakonomics approach to the problems of development in their new book Economic Gangsters. It's a superbly crafted set of essays that raise the bar for clear, accessible pop-economics writing, and offers an excellent overview of recent research into the corruption, violence, and poverty that have long bedeviled the developing world."—Bradford Plumer, The National

"Freakonomics for the Third World. . . . So far this is sounding very much like Steven Levitt's and Stephen Dubner's Freakonomics: looking for an interesting data set with which to test a certain hypothesis, and indeed the basic approach is similar. The ambition, however, is rather grander."—Tim Worstall, The Daily Telegraph

"This book deserves wide readership. Some readers will come for the clever title and the cover's provocative silhouette of a machine-gun-wielding gangster. More, hopefully, will be drawn to the book by reviews like this one and the authors' important message. Economic Gangsters is topical and lively, as its cover suggests, but it is also deadly serious and deeply engrossing. Fisman and Miguel study perhaps the most important question of our day—why some countries grow and prosper while others are trapped in self-reinforcing cycles of violence, corruption, and poverty."—Choice

"This is sparkling stuff, and the story is enjoyably retold in Fisman and Miguel's slim new volume, Economic Gangsters. I recommend the book wholeheartedly; it is engaging and confidently written, and it describes research of genuine interest. . . . Economic Gangsters tackles two big 'institutional' problems of development economics—corruption and violence—through a series of vignettes based on research studying the value of political connections, smuggling between China and Hong Kong, the links between rainfall and civil war, witch killings in Africa, and rebuilding Vietnam after 'the American War.'"—Tim Harford, Reason

"Analyses of crime and corruption tend, not surprisingly, to be long on description and short on empirical analysis. Statistics on amounts embezzled or number of people killed in a genocide lack precision, where they exist at all. [Economic Gangsters] sets out the clever use of the rare reliable statistics that are available to shed light on particular episodes of corruption or violence, and in particular on whether it is possible to design policies which change the incentives of those behaving in undesirable ways. . . . All in all, this is a very readable book which makes a fascinating contribution to the renaissance of careful empirical microeconomics applied to development."—Diane Coyle, The Business Economist

"Fisman and Miguel have turned out another economics tome, written in a friendly and engaging way, yet this one reeks of practicality."—Sacremento Book Review

"I already knew Fisman and Miguel were the best and the brightest in the new generation of development economists. Now I know they are great writers—and great detectives. They find ingenious ways to get inside the issues of corruption and violence that leave behind the tired analyses of the past. It's a lively tale that nobody concerned about world poverty or violence can afford to miss."—William Easterly, author of The White Man's Burden

"Economic Gangsters reveals the important connections between poverty, crime, and corruption, helping us to see what a small and intertwined world we live in."—Dan Ariely, author of Predictably Irrational

"Economic Gangsters is a fascinating exploration of the dark side of economic development. Two of the world's most creative young economists use their remarkable talents for economic sleuthing to study violence, corruption, and poverty in the most unexpected ways. Subjected to their genius, seemingly inconsequential events (like New York City parking tickets and Suharto's catching a cold) become potent tools in understanding how the world really works. Rarely has a book on economics been this fun and this important."—Steven D. Levitt, coauthor of Freakonomics

"Those who love to pontificate, unconstrained by data, about the nature of human evil, will hate this book. It takes on corruption, murder, and civil wars, and shows us, step by step, how economic methods, creatively used, can help us find relevant data in unexpected places, data that makes it possible to offer rigorous (and sometimes surprising) answers to questions that, hitherto, had been consigned to the realm of pure speculation."—Abhijit Banerjee, director of the Abdul Latif Jameel Poverty Action Lab at the Massachusetts Institute of Technology