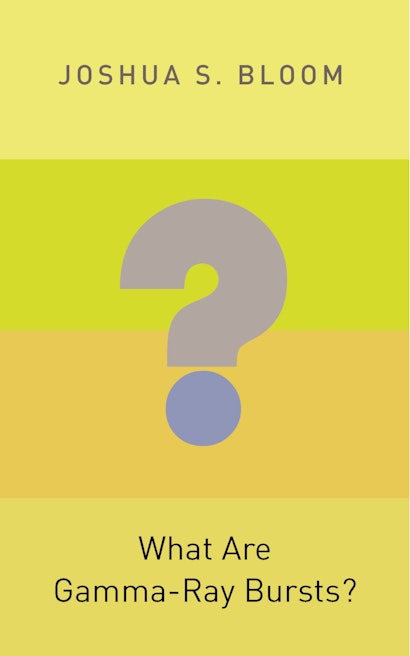 Gamma-ray bursts are the brightest — and, until recently, among the least understood — cosmic events in the universe. Discovered by chance during the cold war, these evanescent high-energy explosions confounded astronomers for decades. But a rapid series of startling breakthroughs beginning in 1997 revealed that the majority of gamma-ray bursts are caused by the explosions of young and massive stars in the vast star-forming cauldrons of distant galaxies. New findings also point to very different origins for some events, serving to complicate but enrich our understanding of the exotic and violent universe. What Are Gamma-Ray Bursts? is a succinct introduction to this fast-growing subject, written by an astrophysicist who is at the forefront of today’s research into these incredible cosmic phenomena.


Joshua Bloom gives readers a concise and accessible overview of gamma-ray bursts and the theoretical framework that physicists have developed to make sense of complex observations across the electromagnetic spectrum. He traces the history of remarkable discoveries that led to our current understanding of gamma-ray bursts, and reveals the decisive role these phenomena could play in the grand pursuits of twenty-first century astrophysics, from studying gravity waves and unveiling the growth of stars and galaxies after the big bang to surmising the ultimate fate of the universe itself.

What Are Gamma-Ray Bursts? is an essential primer to this exciting frontier of scientific inquiry, and a must-read for anyone seeking to keep pace with cutting-edge developments in physics today.

Joshua S. Bloom is associate professor of astronomy at the University of California, Berkeley.

"This series of books (Princeton Frontiers of Physics) is aimed at 'students, scientists and scientifically minded general readers'. This particular book is on target, with reasonably clear explanations of most of the jargon, a useful glossary, a good index and a reference to a more advanced review for those who need it."—D.J. Miller, Contemporary Physics

"This is a marvelous book. It contains the new results from the fast-developing science of gamma-ray-burst astronomy along with its fascinating history. I recommend it as a good introduction for nonexperts and a fun read for researchers in the field."—Neil Gehrels, NASA Goddard Space Flight Center

"This book gives a balanced and up-to-date overview of the field of gamma-ray bursts, one that will be useful for astronomers, physicists, and other scientists. Until now, there have been no books that I know of that deal with this subject for a broader audience of scientists and educated lay people."—Ralph A.M.J. Wijers, University of Amsterdam