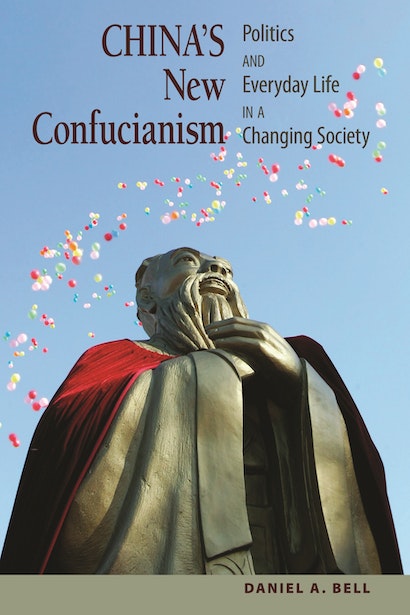 What is it like to be a Westerner teaching political philosophy in an officially Marxist state? Why do Chinese sex workers sing karaoke with their customers? And why do some Communist Party cadres get promoted if they care for their elderly parents? In this entertaining and illuminating book, one of the few Westerners to teach at a Chinese university draws on his personal experiences to paint an unexpected portrait of a society undergoing faster and more sweeping changes than anywhere else on earth. With a storyteller’s eye for detail, Daniel Bell observes the rituals, routines, and tensions of daily life in China. China’s New Confucianism makes the case that as the nation retreats from communism, it is embracing a new Confucianism that offers a compelling alternative to Western liberalism.


Bell provides an insider’s account of Chinese culture and, along the way, debunks a variety of stereotypes. He presents the startling argument that Confucian social hierarchy can actually contribute to economic equality in China. He covers such diverse social topics as sex, sports, and the treatment of domestic workers. He considers the 2008 Olympics in Beijing, wondering whether Chinese overcompetitiveness might be tempered by Confucian civility. And he looks at education in China, showing the ways Confucianism impacts his role as a political theorist and teacher.


By examining the challenges that arise as China adapts ancient values to contemporary society, China’s New Confucianism enriches the dialogue of possibilities available to this rapidly evolving nation.


In a new preface, Bell discusses the challenges of promoting Confucianism in China and the West.

Daniel A. Bell is professor of political theory at Tsinghua University in Beijing. His books include Beyond Liberal Democracy and East Meets West (both Princeton).

"This revival is the subject of political philosopher Daniel A. Bell's trenchant and surprisingly personal China's New Confucianism. Bell was the first foreigner hired since the Cultural Revolution to teach humanities at Beijing's prestigious Tsinghua University; one of the few Western professors in the country, he enjoys a unique outsider/insider perspective."—Michael Levitin, Los Angeles Times Book Review

"Bell paints a vivid portrait of Confucianism in today's China, a society undergoing drastic socioeconomic transformation. In his writing, Confucianism is no longer a quasi-religious body of dogma but a living, developing and constantly renewable stream of ideas."—Yongnian Zheng, Times Higher Education

"This interesting and insightful volume by Bell offers an insider's account of a rapidly changing society in China and seeks to debunk a variety of crude stereotypes of Confucians."—S.K. Ma, Choice

"Daniel Bell is winningly realistic about the difficulties involved in adapting Confucian practices to a more egalitarian world and uniquely capable as a scholar in this area. . . . Bell's scholarly discussions . . . draw on a subtle and wide-ranging grasp of the classics of Chinese political philosophy."—Brian Walker, China Quarterly

"Whether discussing sexual or national politics, Bell offers a sympathetic, nuanced approach to China that counsels tolerance and reason, informing the general reader reliably and concretely about the significance of Confucian ideas in China today."—Timothy Cheek, Literary Review of Canada

"There is no better scholar on a West and East dialogue than Professor Bell. . . . [He] observes Chinese society as an outsider and insider, with distance yet intimacy, seeing more things than either and in more novel ways."—Yan Sun, Journal of Chinese Political Science

"Bell, who teaches politics at Beijing's crack Tsinghua University, is well placed to comment on changing Chinese attitudes. He detects signs of a reviving interest in, and practice of, pre-communist traditions, whether in the lecture hall, in the streets, or inside karaoke bars...China's New Confucianism wisely refrains from any grand schematic overview. Rather, this is an informed and thoughtful interim response to an important contemporary trend."—Justin Wintle, The Independent

"In [China's New Confucianism], [Bell] talks about such subjects as why Communist Party leaders invoke centuries-old Confucian values now? Why do senior communist leaders dye their hair black? Why the Chinese view that human rights should not have priority over national sovereignty? The adventurous professor even talks about why sexual intercourse with karaoke bar girls in China is often preceded by singing a duet. Bell draws on various social scenes in today's China and provides a Confucian explanation...In the book, Bell offers his personal observations on some Western 'misunderstandings' about China."—Sunny Lee, Asia Times Online

"Daniel Bell has been able to breathe fresh life into an ancient and one largely-dismissed subject—and by doing so, has shown readers the possible benefits of the reintroduction of parts of Confucianism into modern Chinese society. China's New Confucianism is a great reminder of the wisdom—as well as some of the prejudices—of previous generations of thinkers and leaders."—Kit Gillet, China International Business

"This is an informative and entertaining book on the problems and challenges of contemporary China. . . . [I]t is learned, sensible, and heartfelt."—On-cho Ng, Centre Daily Times

"By examining the challenges that arise as China adapts ancient values to contemporary society, China's New Confucianism enriches the dialogue of possibilities available to this rapidly evolving nation."—World Book Industry

"China's New Confucianism is a lively, informed, and very insightful look at modern China. Daniel A. Bell has an established reputation as an academic analyst. With this book he has accomplished something rarer and more impressive: combining his scholarship in an effortless way with keen observations of daily life, from the sports field to the karaoke bar to the classroom. He is the first to say that no one book, nor even a lifetime's experience, equips an observer to 'understand' China fully. But his book will give almost any reader a better understanding of the energy and contradictions of this country."—James Fallows, correspondent for Atlantic Monthly

"As the first Western scholar to become full-time faculty in political philosophy at one of China's most prestigious universities, Daniel Bell has a unique, insightful, and rich perspective on the Confucian values in contemporary Chinese politics and people's daily lives. The groundbreaking yet effective arguments in this book will elicit much discussion. I enthusiastically support and endorse this book without reservation."—Chen Lai, Peking University

"Daniel Bell is a Westerner who lives in China, speaks Chinese, and teaches in a Chinese university. He writes about his adopted country with exactly the right mix of appreciation and critical distance. His accounts of academic and domestic life, sex and sport, equality and hierarchy, and Marx and Confucius are, all of them, wonderfully illuminating."—Michael Walzer, Institute for Advanced Study

"Daniel Bell has written a broadly accessible book that shows another side of the complex reality that is contemporary China. China's New Confucianism is a book that anyone with a deep interest in China can sink their teeth into, learn from, be challenged by, and thoroughly enjoy."—Stephen C. Angle, Wesleyan University

"Daniel Bell is without peer among contemporary political and social philosophers working on traditional and contemporary China. Full of insight, his new book will stimulate significant discussion. Blending theoretical sophistication, broad command of the best literature, keen observation of contemporary events, and candid personal anecdote, it deserves a great deal of attention, not only in Western countries, but throughout East Asia as well."—Philip J. Ivanhoe, City University of Hong Kong