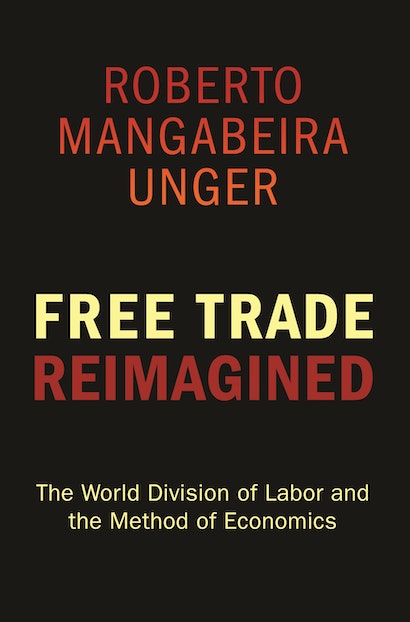 Free Trade Reimagined begins with a sustained criticism of the heart of the emerging world economy, the theory and practice of free trade. Roberto Mangabeira Unger does not, however, defend protectionism against free trade. Instead, he attacks and revises the terms on which the traditional debate between free traders and protectionists has been joined.


Unger’s intervention in this major contemporary debate serves as a point of departure for a proposal to rethink the basic ideas with which we explain economic activity. He suggests, by example as well as by theory, a way of understanding contemporary economies that is both more realistic and more revealing of hidden possibilities for transformation than are the established forms of economics.


One message of the book is that we need not choose between accepting and rejecting globalization; we can have a different globalization. Traditional free trade doctrine rests on shaky empirical and theoretical ground. Unger takes a new approach to show when international trade is likely to be useful or harmful to the socially inclusive economic growth that every nation wants. Another message is that the movement of people and ideas is more important than the movement of things and money, and that freedom to change the institutions defining a market economy is just as important as freedom to exchange goods on the basis of those institutions.

Free Trade Reimagined ranges broadly within and outside economics. Presenting technical issues in plain language, it appeals to the general reader. It puts a disciplined imagination in the service of rebellion against the dictatorship of no alternatives that characterizes life and thought today.

Roberto Mangabeira Unger served until recently as Brazil's Minister of Strategic Affairs. He is widely regarded as one of the leading theorists of society in the world. His two most recent books are The Left Alternative and The Self Awakened: Pragmatism Unbound.

"[T]he book . . . is replete with new ideas and challenging propositions. Many of them are well taken, and may some day be incorporated in accepted economic theory."—Mordechai E. Kreinin, World Trade Review

"Unger's book deepens and broadens the debate on free trade and is therefore well worth the attention of academic economists and policymakers."—Amitava Dutt, Economic and Political Weekly

"[Unger's] argument [is] that we can at once deepen democracy, enhance social security, and foster economic innovation and growth. . . . The scale and scope of the proposals are breathtaking, encompassing the entirety of human society, from the individual to global institutions."—Daniel Aldana Cohen, Walrus Magazine

"Overall, the book is an exceptional contribution, providing an original and innovative perspective to the rethinking of globalization and free trade. The simplicity of the approach chosen for the analysis, which discusses technical issues in plain language, the diversity, and the breadth of new ideas so clearly exposed, are undoubtedly the book's primary strength. . . . To sum up, I think the main audience for Unger's book will be academic researchers, students, or policymakers in search of new ideas about the concept of free trade, or anyone interested in the subject of globalization and international trade from a unique perspective."—Natalie Chen, Journal of Regional Science

"Few minds are as fertile as Roberto Mangabeira Unger's. In this extraordinary book, Unger turns his attention to an area that is in much need of creative thinking and breathes some fresh air on the stale academic debates surrounding free trade."—Dani Rodrik, Harvard University, author of One Economics, Many Recipes

"Unger has written an incisive and compelling critique of free trade. The core of the argument-which seems to me historically incontrovertible—is that a nation's comparative advantage is always constructed by collaboration between public authorities and private interests. The essay hammers this point home with the relentless brilliance for which the author is known. A clear and worthy challenge both to those who are sure the doctrine of free trade is right and those who are confident that is fundamentally flawed."—Charles Sabel, Columbia Law School

"This book aims to provide a critical assessment of the present theoretical and practical consensus in favor of the orthodox conception of free trade and to outline the elements of a realizable alternative. Unger reveals a remarkable breadth of understanding of the field, boring into it with his inimitable and potent vision. This is a book of enormous intellectual and worldly interest."—Sanjay Reddy, Columbia University

"As one would expect from Unger, the book is brilliantly written and his central theses are persuasively and passionately argued. It is readily accessible and will command a wide audience and generate significant and constructive public debate and controversy."—Michael Trebilcock, University of Toronto