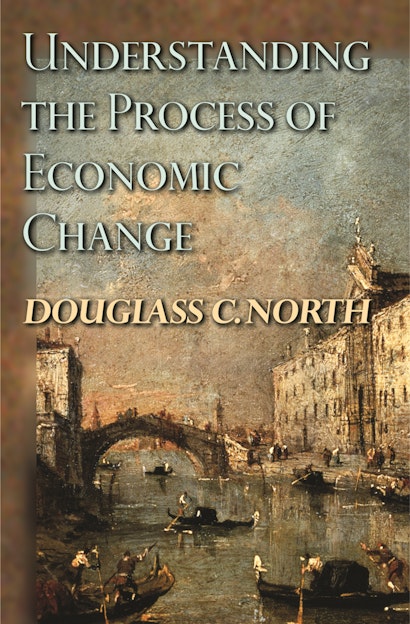 In this landmark work, a Nobel Prize-winning economist develops a new way of understanding the process by which economies change. Douglass North inspired a revolution in economic history a generation ago by demonstrating that economic performance is determined largely by the kind and quality of institutions that support markets. As he showed in two now classic books that inspired the New Institutional Economics (today a subfield of economics), property rights and transaction costs are fundamental determinants. Here, North explains how different societies arrive at the institutional infrastructure that greatly determines their economic trajectories.


North argues that economic change depends largely on “adaptive efficiency,” a society’s effectiveness in creating institutions that are productive, stable, fair, and broadly accepted — and, importantly, flexible enough to be changed or replaced in response to political and economic feedback. While adhering to his earlier definition of institutions as the formal and informal rules that constrain human economic behavior, he extends his analysis to explore the deeper determinants of how these rules evolve and how economies change. Drawing on recent work by psychologists, he identifies intentionality as the crucial variable and proceeds to demonstrate how intentionality emerges as the product of social learning and how it then shapes the economy’s institutional foundations and thus its capacity to adapt to changing circumstances.

Understanding the Process of Economic Change accounts not only for past institutional change but also for the diverse performance of present-day economies. This major work is therefore also an essential guide to improving the performance of developing countries.

Douglass C. North is professor of economics and Spencer T. Olin Professor in Arts and Sciences at Washington University in St. Louis. He was the corecipient of the Nobel Prize in Economic Sciences in 1993.

"Anyone with an interest in world poverty can benefit from this carefully crafted and closely argued book. It is a pleasure and a delight to read."—Paul Ormerod, Times Higher Education

"[North] sets forth a radical reconceptualization of the task and methods of the social sciences in general and economics in particular, providing a glimpse at an economics that refuses to 'assume a can opener.'"—Will Wilkinson, Cato Journal

"[This book] provides a sweeping view of the relationships among human belief systems, social institutions, and what [North] calls 'the adaptive efficiency' of societies in coping with changes in demographics, technology, and other factors."—Richard N. Cooper, Foreign Affairs

"A courageous attempt to enlarge the arsenal of theoretical tools available for economists."—Diego Rios, Journal of Evolutionary Economics

"Just as Douglass North's earlier classic, Institutions and Institutional Change, ushered in the revolution in understanding institutions that dominated the nineties, his new book, Understanding the Process of Economic Change, seeks an equally revolutionary change. North now integrates the cognitive component into this analysis: how the mind works, how we form beliefs and understandings about the world, and how societies solve—or fail to solve—the problems they face. This book is vintage North."—Barry Weingast, Professor of Political Science, Stanford University

"In this book Douglass North once again opens new frontiers in economic research. He calls for probing into the human mind to seek an understanding of how knowledge acquired by individuals and societies manifests itself culturally and institutionally to shape processes of change. The analysis makes a courageous foray into territories unfamiliar to most economists, such as social psychology and cognitive science, and uses the findings to further our understanding of the most pressing economic question of our time: why, despite the production capacity of modern technology, do many economies fail to prosper?"—Avner Greif, Bowman Family Professor in the Humanities and Sciences and Professor of Economics, Stanford University

"This short book by a great master will be read, discussed, and debated widely. It boldly goes where few have dared to tread. It is a book about something more ambitious than economic growth or even economic history. It is about economic change, and it dares to ask questions that the profession will still be scratching its head over for many years to come."—Joel Mokyr, Northwestern University, author of The Gifts of Athena: Historical Origins of the Knowledge Economy

"This deeply exciting book culminates North's research agenda, and points the way to solving the most valuable but intractable problem in economics today: how institutions evolve. When I first read it I immediately saw implications for my own research, and began rethinking several fundamental ideas about how economies and their governments interrelate. What you learn from North changes how you think, and changing how people think is the best measure of intellectual influence."—John Joseph Wallis, University of Maryland