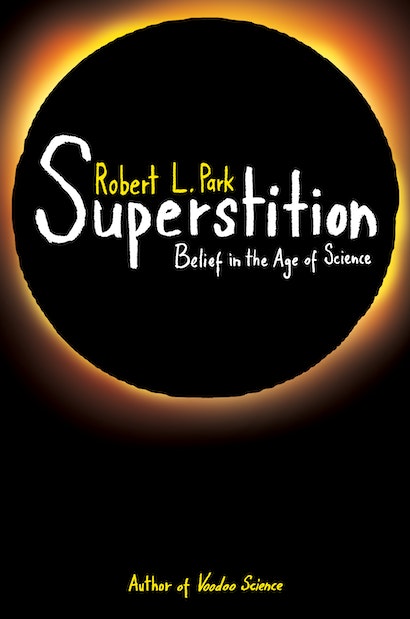 From uttering a prayer before boarding a plane, to exploring past lives through hypnosis, has superstition become pervasive in contemporary culture? Robert Park, the best-selling author of Voodoo Science, argues that it has. In Superstition, Park asks why people persist in superstitious convictions long after science has shown them to be ill-founded. He takes on supernatural beliefs from religion and the afterlife to New Age spiritualism and faith-based medical claims. He examines recent controversies and concludes that science is the only way we have of understanding the world.


Park sides with the forces of reason in a world of continuing and, he fears, increasing superstition. Chapter by chapter, he explains how people too easily mistake pseudoscience for science. He discusses parapsychology, homeopathy, and acupuncture; he questions the existence of souls, the foundations of intelligent design, and the power of prayer; he asks for evidence of reincarnation and astral projections; and he challenges the idea of heaven. Throughout, he demonstrates how people’s blind faith, and their confidence in suspect phenomena and remedies, are manipulated for political ends. Park shows that science prevails when people stop fooling themselves.


Compelling and precise, Superstition takes no hostages in its quest to provoke. In shedding light on some very sensitive — and Park would say scientifically dubious — issues, the book is sure to spark discussion and controversy.

Robert L. Park is professor of physics at the University of Maryland. He is the author of Voodoo Science: The Road from Foolishness to Fraud.

"Park writes with bemusement at human folly but also with outrage at the misappropriation of science."—Robert A. Segal, Times Higher Education

"Park uses his personal story to great effect to champion scientific thinking. He also gets under its skin, to explain how, as well as what, science delivers."—Mark Henderson, Times

"For Princeton physicist Robert Park, science serves as a rapier for skewering all beliefs not sustained by empirical proof. Predictably, religion heads the list of targets . . . [Park] pits experimental rigor not only against the creeds of antiquity but also against the irrationality of New Age gurus who evangelize for alternative medicines or extrasensory perception. . . . Sure to spark sharp debate."—Bryce Christensen, Booklist

"Parks' main target in the first part of his book is Christianity, especially its creationist and so-called intelligent-design offshoots. However, the world's other religions do not emerge unscathed. . . . He takes on New Age beliefs, reserving particular scorn for those practitioners who add the word 'quantum' to unrelated topics like 'healing' to give themselves an imprimatur of scientific respectability. . . . Both religious and non-religious scientists are sure to find something of interest in the rest."—Physics World

"Genial anecdotal tales introduce each chapter, which are then followed with the cutting criticism of various pseudobelief systems. Dogmatic in his emphasis that science is the only way of knowing, Park weighs faith-based beliefs against scientific evidence and makes no allowance for other ways of knowing. . . . The controversial content should provide debate material for the high school and young college crowd as well as the general public."—R.A. Hoots, Choice

"With acerbic wit, Park, professor of physics at the University of Maryland, asks why we believe weird things even when no evidence supports our claims. . . . A humanist and naturalist, Park asserts that science rejects appeal to authority in favor of empirical evidence."—Roy E. Perry, The Tennessean

"Bob Park is a sceptic's sceptic, a consummate critical thinker, a no-nonsense scientist who knows baloney when he detects it. . . . Superstition is more than an entertaining romp through the weird and wonderful. It is an important contribution to the sceptical literature . . . that every scientist needs to be aware of.""—Michael Shermer, Nature Physics

"Guns blazing, Park hunts down what he calls pseudo-science. . . . I found myself enjoying much of this feisty book as a kind of entertainment that raises serious questions."—Evelyn Juers, Australian

"If a tree falls on a scientist in a forest with no one else around does it mean he won't make a sound? Not if that scientist is the indomitable Bob Park, the skeptic's skeptic, the Ralph Nader of nonsense, the man who rose from the (nearly) dead to pen this uncompromising critique of superstition and the beliefs that follow once you abandon science and reason. Read this book. Now."—Michael Shermer, publisher of the Skeptic and author of Why Darwin Matters

"Bob Park has done it again. His lucid, humorous, style—the envy of those of us who fancy themselves writers—gets through the pervasive nonsense that he finds everywhere, from the 'afterlife' delusion to intelligent design. He rightly and joyously celebrates how science has led us from the Dark Ages to the brink of understanding a myriad of mysteries that we should contemplate with a reverence that was once reserved for priests and witchdoctors. No one knows better than Bob—personally—the real miracles of medical science surpass anything offered by religion. As he says in this provocative book: 'Science is the only way of knowing—everything else is just religion.'"—James Randi, president of the James Randi Educational Foundation

"Superstition is yet more evidence that Bob Park is always worth reading. At times funny, at times acerbic, always thoughtful, Bob Park is not one to 'go with the flow.' There is a lot to think about in this book, as usual."—Eugenie C. Scott, executive director of the National Center for Science Education

"You may have the impression that mythology expired with the ancient Greeks and Romans. Far from it, mythology has only evolved into another perhaps more pervasive form. It is an insidious force in the modern scene. Park slays the modern dragons with authority and acerbic wit, whether it is ESP or intercessory prayer. The book is a delight."—Val Fitch, Princeton University, 1980 Nobel laureate in physics

"Opinionated and well-informed, this is a lucid promotion of rationality in a world of rising superstition. We can disagree with the author but he forces us to think harder."—Yves Gingras, University of Quebec, Montreal