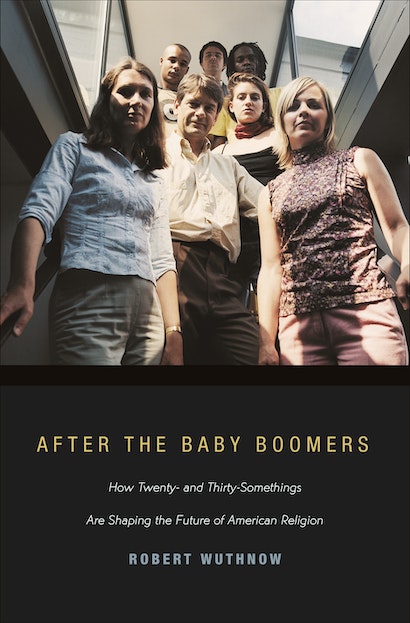 Much has been written about the profound impact the post-World War II baby boomers had on American religion. But the lifestyles and beliefs of the generation that has followed — and the influence these younger Americans in their twenties and thirties are having on the face of religion — are not so well understood. It is this next wave of post-boomers that Robert Wuthnow examines in this illuminating book.


What are their churchgoing habits and spiritual interests and needs? How does their faith affect their families, their communities, and their politics? Interpreting new evidence from scores of in-depth interviews and surveys, Wuthnow reveals a generation of younger adults who, unlike the baby boomers that preceded them, are taking their time establishing themselves in careers, getting married, starting families of their own, and settling down — resulting in an estimated six million fewer regular churchgoers. He shows how the recent growth in evangelicalism is tapering off, and traces how biblical literalism, while still popular, is becoming less dogmatic and more preoccupied with practical guidance. At the same time, Wuthnow explains how conflicts between religious liberals and conservatives continue — including among new immigrant groups such as Hispanics and Asians — and how in the absence of institutional support many post-boomers have taken a more individualistic, improvised approach to spirituality. Wuthnow’s fascinating analysis also explores the impacts of the Internet and so-called virtual churches, and the appeal of megachurches.

After the Baby Boomers offers us a tantalizing look at the future of American religion for decades to come.

Robert Wuthnow is the Gerhard R. Andlinger '52 Professor of Sociology and director of the Center for the Study of Religion at Princeton University. His books include American Mythos: Why Our Best Efforts to Be a Better Nation Fall Short and America and the Challenges of Religious Diversity (both Princeton).

"Robert Wuthnow of Princeton has just published a tremendously valuable book, After the Baby Boomers that looks at young adulthood through the prism of religious practice."—David Brooks, New York Times

"In a volume sure to change how pundits and clergy think about religion in the contemporary U.S., prolific Princeton sociologist Wuthnow assembles and analyzes a vast amount of data about the religious lives of Americans aged 21 to 45... Wuthnow argues that our society provides lots of structural support for children and teens, but leaves younger adults to fend for themselves during the decades when they're making crucial decisions about family and work. Though long passages of dense statistics make for a sometimes clunky read, this book is terrifically important."—Publishers Weekly

"Robert Wuthnow, [a] distinguished sociologist of religion...focuses on...a group that is not just the harbinger of the future but that already constitutes about half the country's adult population. Wuthnow has a great deal to say about marriage, weddings, marital happiness and parenting [and] describes modest changes in worship services and programs that might help congregations engage young adults, especially unmarried ones."—Peter Steinfels, New York Times

"Wuthnow has analyzed an impressive array of data and provided a thought provoking argument about the future, and the present, of American religion."—Matthew T. Loveland, Catholic Books Review

"[This book provides] a challenge to think more broadly about the future of the church, assisted by a leading sociologist's analysis of current trends."—Brian D. McLaren, Christian Century

"As generations pass and distance grows, so do the values which issues from the body of believers gathered in...the church...Robert Wuthnow's important new book After the Baby Boomers...is a potential wake-up signal, an alarm blast."—Martin Marty, Sightings

"Christian leaders who are ready for change will not find a prescription or program in After the Baby Boomers. What they will find is a challenge to think more broadly about the future of the church, assisted by a leading sociologist's analysis of current trends. And they will find something else: a sympathetic voice speaking on behalf of young adults who are highly interested in God, highly in need of guidance and support, highly networked and networkable, highly available to be equipped for vital mission, and largely uninspired by what churches are currently doing...I find myself even more eager to be part of the solution to the problems raised by Wuthnow. Much is at stake."—Brian McLaren, Christian Century

"Wuthnow shares the concerns of religious and spiritual leaders because...he understands the great benefits religion provides society...[A] precise study...After the Baby Boomers is a work of social science [that paints] a detailed picture of the lives of young adults today."—Patton Dodd, Shambhala Sun

"Princeton University's Robert Wuthnow, the most distinguished sociologist of religion in America today, has presented a timely and important text for pastors and those who are concerned about the future of religious communities in America. After the Baby Boomers offers pastors and church leaders an important text to ponder. Wuthnow places his finger on many issues that the church must confront."—Andrew Root, Word & World

"Open any page of Robert Wuthnow's latest book, After the Baby Boomers, and you are sure to find a nugget of data that will add nuance to some of the well-worn assumptions about he religious lives of the so-called Generation X."—Michelle Dillon, Journal for the Scientific Study of Religion

"Wuthnow's text is a refreshing read. . . . [He] does an excellent job of addressing the cultural shifts that explain why it is the case the young adults are less involved in religious institutions. As a macrolevel study, he astutely ties personal level practices to larger social forces, and tacitly employs the sociological imagination—a skill that non-academic readers could find informative."—Katrina C. Hoop, International Review of Modern Sociology

"After the Baby Boomers is a dense but fascinating read; I had trouble deciding which chapters not to assign to my classes. . . . Every chapter of this book contains questions churches and religious leaders must face—and soon."—Kenda Creasy Dean, Theology Today

"Robert Wuthnow has analyzed an impressive array of data and provided a thought provoking argument about the future, and the present, of American religion."—Matthew T. Loveland, Catholic Books Review

"This is an interesting book. . . . The object lesson in the skillful analysis of survey data is instructive, and the call to focus more analysis on young adults (especially this generation of young adults) is timely and thoughtful."—Anthony J. Filipovitch, Nonprofit and Voluntary Sector Quarterly

"Wuthnow's book stands out as a timely, comprehensive, and thoughtful effort. Mixing a tremendous amount of empirical survey evidence with detailed qualitative interviews, the book covers a lot of ground, including emerging issues pertaining to immigration and new technology. Posing a number of smart questions that are ripe for political science answers, it is a sophisticated and yet accessible commentary on the future of American religion that is more than deserving of a place on bookshelves."—Anand Edward Sokhey, Cambridge Journals

"The strength of this book lies . . . in its careful analysis of a very wide range of largely quantitative data. Wuthnow is bitingly critical of sociologists of religion—particularly rational choice theorists—whose work is long on theory and short on evidence. This volume exemplifies the opposite—long on evidence, shorter on theory and explanation."—Linda Woodhead, Religion Journal

"Every generation is different, and in the post-boomers we have one that is as different as it gets. For those of us who care deeply about addressing the spiritual needs of this 'next wave,' Robert Wuthnow has given us an indispensable guide in this important book."—Richard J. Mouw, president of Fuller Theological Seminary

"Interesting and illuminating. There is a great deal of anxiety about the future of the church and its relation to young adults. This book speaks to those concerns, provides some sound empirical data for people to chew on, and will be often referenced."—Christian Smith, coauthor of Soul Searching: The Religious and Spiritual Lives of American Teenagers

"This book is a contribution for church leaders and others concerned about young adults and their involvements in organized religion. The data are new and valuable and shed new insights into the intricacies of religious commitment in our society. There is no other book I am aware of quite like this one."—Wade Clark Roof, author of Spiritual Marketplace: Baby Boomers and the Remaking of American Religion