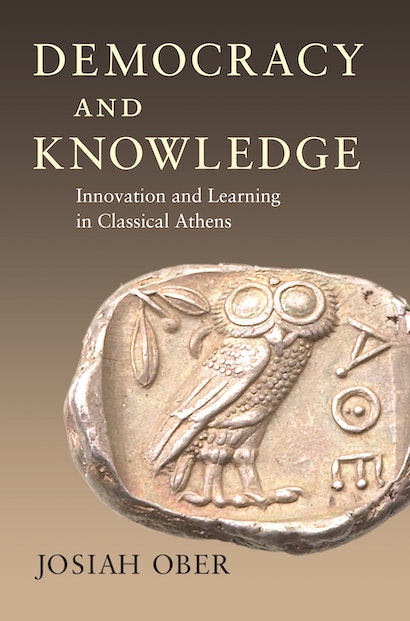 When does democracy work well, and why? Is democracy the best form of government? These questions are of supreme importance today as the United States seeks to promote its democratic values abroad. Democracy and Knowledge is the first book to look to ancient Athens to explain how and why directly democratic government by the people produces wealth, power, and security.


Combining a history of Athens with contemporary theories of collective action and rational choice developed by economists and political scientists, Josiah Ober examines Athenian democracy’s unique contribution to the ancient Greek city-state’s remarkable success, and demonstrates the valuable lessons Athenian political practices hold for us today. He argues that the key to Athens’s success lay in how the city-state managed and organized the aggregation and distribution of knowledge among its citizens. Ober explores the institutional contexts of democratic knowledge management, including the use of social networks for collecting information, publicity for building common knowledge, and open access for lowering transaction costs. He explains why a government’s attempt to dam the flow of information makes democracy stumble. Democratic participation and deliberation consume state resources and social energy. Yet as Ober shows, the benefits of a well-designed democracy far outweigh its costs.


Understanding how democracy can lead to prosperity and security is among the most pressing political challenges of modern times. Democracy and Knowledge reveals how ancient Greek politics can help us transcend the democratic dilemmas that confront the world today.

"Josiah Ober is a practically minded, get up and go, people's kind of democrat. . . . There is certainly nothing like [Democracy and Knowledge] in the literature on ancient politics."—Geoffrey Hawthorn, Times Literary Supplement

"Democracy and Knowledge is the final book in an extraordinary trilogy. It follows Mass and Elite in Democratic Athens, which appeared in 1989, and Political Dissent in Democratic Athens, in 1998. This third book incorporates the central conclusions of the first two, and with this volume Ober, by means of a highly original historical argument about Athens, does in fact refute Michel's famous law. . . . Ober's careful historical work and his theoretical framework generate a convincing portrait of a flourishing participatory democracy that overcame real crises, and achieved a stable balancing of the interests of masses and wealthy elites, and responded to collective action problems by developing institutional and cultural solutions that focused on the social distribution and the social valuation of knowledge. . . . Is it too much to ask that members of the Obama administration turn to a dense work of ancient history to help them make good on Obama's vision of an American state that combines the resources of representative and participatory democracy? They would take away from Democracy and Knowledge at least a few important general ideas."—Danielle Allen, The New Republic

"This book . . . richly rewards any reader with interests in democratic theory or Athens. For many it could renew an interest in the sociology of deliberative action. And it does an excellent job rethinking tired political hyperdivision of 'public vs. private,' 'weak vs. strong publics,' and 'civic vs. market orientations.'"—Christopher Moore, Bryn Mawr Classical Review

"Josiah Ober's book is a remarkable contribution to classical Greek history, social theory, and political philosophy. It advances understandings within each field and shows why these disciplines should be in more conversation with one another."—Gerald Mara, Cambridge Journals

"The book is written in a very accessible style and it should be of interest to a wide range of scholars working in the are of ancient history, political science and democratic theory."—Zsuzsanna Chappell, Political Studies Review

"[This book is] very much worth reading, if for no other reason than for the extremely rich and interesting historical detail to be found. . . . In this respect, [the] author live[s] up to [his] justly earned reputation as [a] great political historian."—Frank Lovett, Perspectives on Politics

"[Ober] makes a detailed and stimulating case. This is a book which has much to offer to both scholars of Athenian democracy and democratic political thought."—Peter Liddel, European Legacy

"In this pathbreaking work, Josiah Ober draws on the full array of modern social science to explain the amazing success of Athenian democracy. He argues persuasively that the Athenians were able to overcome problems of collective action through the efficient aggregation and use of knowledge, as when Cleisthenes created new tribes that brought together citizens from different parts of Attica. The striking vignettes and episodes from Athenian history conjoined with sophisticated theoretical analyses make for utterly compelling reading. It will enrich social science no less than the writing of ancient history. Since the work of Paul Veyne, there has been nothing like it."—Jon Elster, Collège de France

"A fresh, intellectually daring proposal by the George Grote of our times: democracy is not just an ethically desirable political form, but potentially unsurpassed as a source of innovation, public learning, and the application of publicly useful knowledge."—John Keane, professor of politics at the University of Westminster and the Wissenschaftszentrum Berlin

"Democracy and Knowledge looks at Athenian democracy from a quite new angle by taking on a question that has not previously made the transition from political and social science to ancient world studies. No one has even asked how in practice the Athenians aggregated their knowledge to make sensible decisions. There is no treatment of classical Athens or, to my knowledge, of the working of any democracy, comparable to this."—Robin Osborne, University of Cambridge

"This is a terrific book. Ober applies modern social science to explain and make sense of Athenian institutions, and offers strong and compelling discussions of many issues. The two central lines of argument—the role and structure of knowledge and the incentive or game structures of the interactions of citizens in politics—are at the core of understanding these issues, and yet they are seldom brought together in this way."—Russell Hardin, New York University