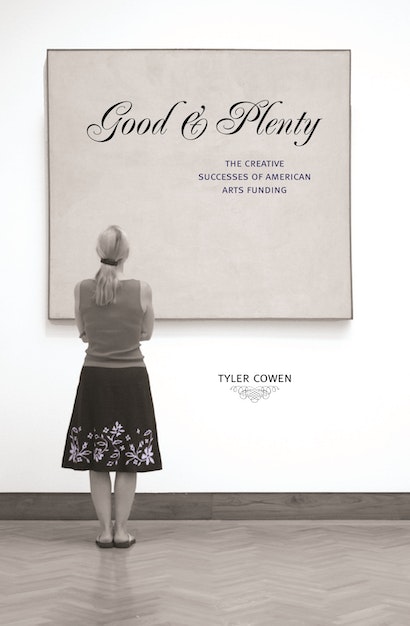 Americans agree about government arts funding in the way the women in the old joke agree about the food at the wedding: it’s terrible — and such small portions! Americans typically either want to abolish the National Endowment for the Arts, or they believe that public arts funding should be dramatically increased because the arts cannot survive in the free market. It would take a lover of the arts who is also a libertarian economist to bridge such a gap. Enter Tyler Cowen. In this book he argues why the U.S. way of funding the arts, while largely indirect, results not in the terrible and the small but in Good and Plenty — and how it could result in even more and better.


Few would deny that America produces and consumes art of a quantity and quality comparable to that of any country. But is this despite or because of America’s meager direct funding of the arts relative to European countries? Overturning the conventional wisdom of this question, Cowen argues that American art thrives through an ingenious combination of small direct subsidies and immense indirect subsidies such as copyright law and tax policies that encourage nonprofits and charitable giving. This decentralized and even somewhat accidental — but decidedly not laissez-faire — system results in arts that are arguably more creative, diverse, abundant, and politically unencumbered than that of Europe.


Bringing serious attention to the neglected issue of the American way of funding the arts, Good and Plenty is essential reading for anyone concerned about the arts or their funding.

Tyler Cowen is professor of economics at George Mason University. His books include Creative Destruction (Princeton) and Create Your Own Economy. He frequently writes for the New York Times, Slate, and the economics blog Marginal Revolution.

"A rare and much needed objective look at the topic of government funding for the arts. Avoiding the hyperbole often heard on both sides of the argument, Cowen offers a balanced overview of publicly-funded art. A must for the biased advocate."—Art Times

"Cowen makes the point loudly and clearly: indirect subsidy favors the decentralization of artistic creativity, particularly as it involves nonprofit institutions, and a thousand flowers can (and do) bloom."—J. Mark Schuster, Journal of Cultural Economics

"[Good and Plenty] explores the debate over government funding for the arts in an attempt to make each position intelligible and sympathetic to the other side."—Journal of Economic Literature

"Where Good and Plenty is at its best is in its discussion of the overall ecology of the arts and cultural sector, drawing explicit links between avant-garde activity and later commercial success. The narrative of experimentation as research and development for the sector is one that has recently gained currency in the UK and is discussed with persuasive force in Cowen's book."—Dave O'Brien, LSE British Politics and Policy blog

"Taking up the question of how we think about policies toward goods that are both public symbols and economic products, Tyler Cowen's Good and Plenty demonstrates that the usual discussion of arts policy misses the point. If you focus obsessively on urine-dipped crucifixes subsidized by the NEA, you miss the government's role in encouraging many other symbols, from the Chicago Bears to Harvard. You miss the history of the WPA in the 1930s and the Voice of America in the 1950s, political art dwarfing the NEA. You will suppose mistakenly that arts policy in the United States is laissez-faire. Advancing economics into serious thinking about culture, Cowen's book is a pleasure and profit to read."—Deirdre McCloskey, University of Illinois, Chicago, author of How to Be Human (Though an Economist)

"Nearly everything I have read on the government's involvement in the arts suffers from being little more than shrill advocacy. Tyler Cowen's Good and Plenty makes a refreshing departure by providing a calm and thorough analysis of the causes and consequences of government arts policy. The book offers a temperate, well-reasoned consideration of a broad range of related subjects, and is much more thorough than any other treatment I have read. It makes a very useful contribution."—David Galenson, University of Chicago, author of Painting Outside the Lines

"Tyler Cowen is to be congratulated for tackling the bedeviled relation between 'art and beauty' as understood by the Western tradition and the 'liberal state' with its ethos, if not practice, of egalitarianism. As always, he delights in using hard data to prick the balloons of received opinion, especially the bad rap given to 'commercial culture.'"—Martha Bayles, arts journalist and professor at Boston College