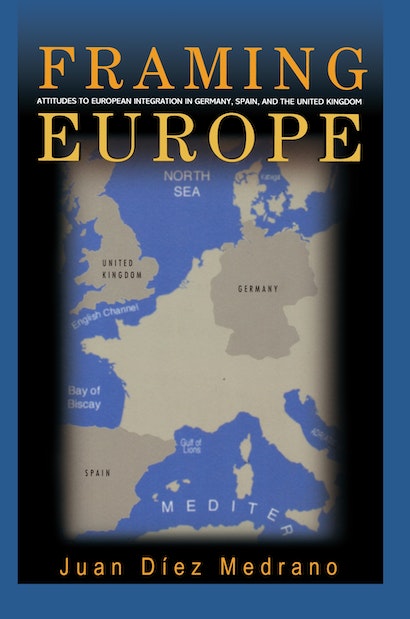 This book provides a major empirical analysis of differing attitudes to European integration in three of Europe’s most important countries: Germany, Spain, and the United Kingdom. From its beginnings, the European Union has resounded with debate over whether to move toward a federal or intergovernmental system. However, Juan Díez Medrano argues that empirical analyses of support for integration — by specialists in international relations, comparative politics, and survey research — have failed to explain why some countries lean toward federalism whereas others lean toward intergovernmentalism.

By applying frame analysis to a unique set of primary sources (in-depth interviews, newspaper articles, novels, history texts, political speeches, and survey data), Díez Medrano demonstrates the role of major historical events in transforming national cultures and thus creating new opportunities for political transformation. Clearly written and rigorously argued, Framing Europe explains differences in support for European integration between the three countries studied in light of the degree to which each realized its particular “supranational project” outside Western Europe. Only the United Kingdom succeeded in consolidating an empire and retaining it after World War II, while Germany and Spain each abandoned their corresponding aspirations. These differences meant that these countries’ populations developed different degrees of identification as Europeans and, partly in consequence, different degrees of support for the building of a federal Europe.

Juan Díez Medrano is Associate Professor of Sociology at the University of California, San Diego. He is the author of Divided Nations: Class, Politics, and Nationalism in the Basque Country and Catalonia.

"Without question a significant achievement. . . . Medrano's study constitutes a significant contribution to the literatures on European integration, political culture, and nationalism. It tells a compelling story of the construction of collective identities and of the myths upon which they are frequently based."—Andreas Sobisch, Perspectives on Politics

"Framing Europe is an extremely significant book on an important topic: attitudes toward European integration in Great Britain, Spain, and Germany. It is impressive for its combination of ethnographic, interpretive, historical, and statistical methods and for its synthesis of a vast amount of material. . . . Framing Europe is an important intervention in the cultural sociology of politics. One can read it as an argument about the way political resentations result from other representations in complexly overdetermined historical conjunctures."—George Steinmetz, American Journal of Sociology

"Medrano has provided us with new and valuable insights into the EU and European integration—well written, close to his sources and data, employing an interesting analytical approach and design that links micro-level attitudes among European citizens to macrolevel processes."—Stefan Hojelid, European Legacy

"This book is a scholarly tour de force. There is nothing comparable that I know of. The richness of the data is unsurpassed, and the contextual knowledge of Spain, Germany, and Britain is superb. The book is logically organized, and the writing is clear. It is what scholarship should be all about but only rarely is these days: careful, in-depth work on an important question, displaying an intellect in full control of the material."—Peter Katzenstein, Cornell University, author of Tamed Power: Germany in Europe

"This is a genuinely groundbreaking work. It is to my knowledge the very first study by a comparative historical sociologist of contemporary attitudes to European integration in different European nations. It is a serious, thorough, extensively researched project, remarkably at ease with the different national contexts, histories, and languages it handles. The field of European studies—where there is a feeble amount of good sociology on the subject—greatly needs this kind of work."—Adrian Favell, University of California, Los Angeles, author of Philosophies of Integration