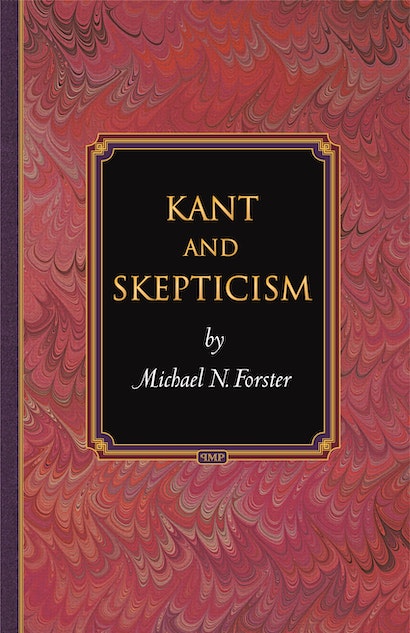 This book puts forward a much-needed reappraisal of Immanuel Kant’s conception of and response to skepticism, as set forth principally in the Critique of Pure Reason. It is widely recognized that Kant’s theoretical philosophy aims to answer skepticism and reform metaphysics — Michael Forster makes the controversial argument that those aims are closely linked. He distinguishes among three types of skepticism: “veil of perception” skepticism, which concerns the external world; Humean skepticism, which concerns the existence of a priori concepts and synthetic a priori knowledge; and Pyrrhonian skepticism, which concerns the equal balance of opposing arguments. Forster overturns conventional views by showing how the first of these types was of little importance for Kant, but how the second and third held very special importance for him, namely because of their bearing on the fate of metaphysics. He argues that Kant undertook his reform of metaphysics primarily in order to render it defensible against these types of skepticism. Finally, in a critical appraisal of Kant’s project, Forster argues that, despite its strengths, it ultimately fails, for reasons that carry interesting broader philosophical lessons. These reasons include inadequate self-reflection and an underestimation of the resources of Pyrrhonian skepticism.

Michael N. Forster is professor of philosophy at the University of Chicago. His books include Wittgenstein on the Arbitrariness of Grammar (Princeton), Hegel's Idea of a Phenomenology of Spirit, and Hegel and Skepticism.

"In this precise, lively work, Forster establishes the significance of skepticism in the motivation, development, and formulation of Kant's thought. He examines three varieties of skepticism: 'veil of perception skepticism' concerning the external world, which he interprets as secondary for Kant despite its priority in previous literature; 'Humean skepticism' concerning the possibility of a priori knowledge; and 'Pyrrhonian skepticism,' employing a 'zetetic method' of equipollence and antinomies in order to suspend judgment. . . . Forster concludes, however, that Kant's reliance on transcendental arguments and transcendental idealism reintroduces the skeptical problems they were meant to resolve through inadequate self-reflection and radical skepticism's revenge on Kant's incorporation of its moderate variant."—E. S. Nelson, University of Massachusetts Lowell, for, CHOICE

"[N]o one interested in the basic issues of Kant's theoretical philosophy can afford to neglect Forster's elegantly written (and produced) book, and it should prove particularly valuable for stimulating discussion in courses on Kant's first Critique."—Paul Guyer, Philosophical Review

"The message is persuasive and ingeniously conveyed in an enjoyable and refreshing book. I recommend Kant and Skepticism to Kant scholars, those interested in skepticism, and those interested in Hegel's criticisms of Kant."—Craig French, Heythrop Journal

"I highly recommend this book to those working on Kant's philosophy, the general history of modern skepticism, or the influence of Pyrrhonism on modern thought."—Diego E. Machuca, Philosophy in Review

"Kant and Skepticism is an excellent book that is well worth thinking about long and hard, and will also, I predict, be a much discussed contribution to Kant studies in the foreseeable future."—Robert Hanna, Philosophical Quarterly

"[T]he reviewer suspects that his fellow Anglophones will find Forster's book interesting, challenging, and enlightening, but probably something short of heretical. . . . The great strength of Kant and Skepticism is that it neatly slices one set of issues from the complex whole of the first Critique, allowing Forster and the reader with him to assess a particular, extremely important question about Kant's philosophy."—Ted Kinnaman, Kant-Studien

"This book gives a clear and lucid account of Kant's relation to skepticism, both in its historical development and in its systematic import. Forster connects Kant's views to contemporary discussions even while avoiding the pitfalls of anachronism. The confidence with which he traces the various strands of skepticism in the history of philosophy as well as Kant's responses to them is remarkable."—Béatrice Longuenesse, New York University

"I found this book rather gripping. It outlines several varieties of skepticism, considers the role that each plays in Kant's thought, and analyzes his responses to them. The scholarship is impeccable. I know of no other book on this theme."—Michael Inwood, University of Oxford