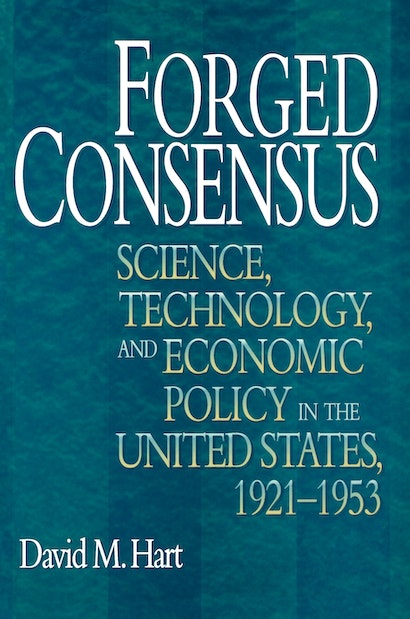 In this thought-provoking book, David Hart challenges the creation myth of post — World War II federal science and technology policy. According to this myth, the postwar policy sprang full-blown from the mind of Vannevar Bush in the form of Science, the Endless Frontier (1945). Hart puts Bush’s efforts in a larger historical and political context, demonstrating in the process that Bush was but one of many contributors to this complex policy and not necessarily the most successful one. Herbert Hoover, Karl Compton, Thurman Arnold, Henry Wallace, Robert Taft, and Curtis LeMay — along with more familiar figures like Bush — are among those whose endeavors he traces.

Hart places these policy entrepreneurs in the broad scheme of American political development, connecting each one’s vision of the state in this apparently esoteric policy area to the central issues, events, and figures of mid-century America and to key theoretical debates. Hart’s work reveals the wide range of ideas, often in conflict with one another, that underlay what later observers interpreted as a “postwar consensus.” In Hart’s view, these visions — and the interests and institutions that shape their translation into public policy — form the enduring basis of American politics in this important area. Policymakers today are still grappling with the legacies of the forged consensus.

"A provocative new book. . . . It is a book to read, reread, ponder, and argue about, a major work on political language."—Rhetoric and Public Affairs