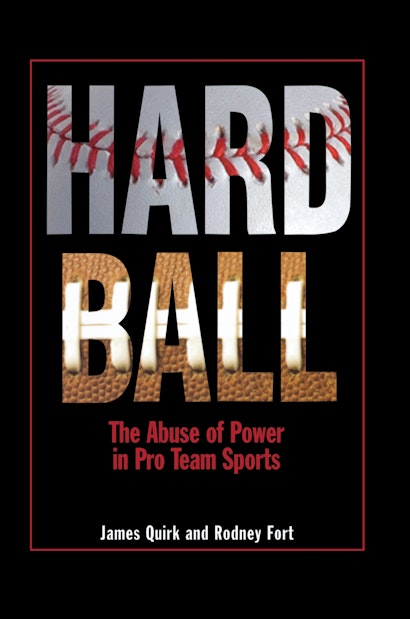 What can possibly account for the strange state of affairs in professional sports today? There are billionaire owners and millionaire players, but both groups are constantly squabbling over money. Many pro teams appear to be virtual “cash machines,” generating astronomical annual revenues, but their owners seem willing to uproot them and move to any city willing to promise increased profits. At the same time, mayors continue to cook up “sweetheart deals” that lavish benefits on wealthy teams while imposing crushing financial hardships on cities that are already strapped with debt. To fans today, professional sports teams often look more like professional extortionists.

In Hard Ball, James Quirk and Rodney Fort take on a daunting challenge: explaining exactly how things have gotten to this point and proposing a way out. Both authors are professional economists who specialize in the economics of sports. Their previous book, Pay Dirt: The Business of Professional Team Sports, is widely acknowledged as the Bible of sports economics. Here, however, they are writing for sports fans who are trying to make sense out of the perplexing world of pro team sports. It is not money, in itself, that is the cause of today’s problems, they assert. In fact, the real problem stems from one simple fact: pro sports are monopolies that are fully sanctioned by the U.S. government. Eliminate the monopolies, say Quirk and Fort, and all problems can be solved. If the monopolies are allowed to persist, so will today’s woes.

The authors discuss all four major pro team sports: baseball, football, basketball, and hockey. Hard Ball is filled with anecdotes, case studies, and factual information that are brought together here for the first time. Quirk and Fort devote chapters to the main protagonists in the pro sports saga — media, unions, players, owners, politicians, and leagues — before they offer their own prescription for correcting the ills that afflict sports today. The result is an engaging and persuasive book that is sure to be widely read, cited, and debated. It is essential reading for every fan.

"In their book, Hard Ball, James Quirk and Rodney Fort take the sports industry to task with a well-conceived and clearly rendered brief on the economics behind professional sports. The authors use a methodical but vigorous approach to examine the groups—the media, unions, players, owners, leagues and local politicians—that make up the pro-sports complex. . . . In the end, the authors blame all of pro sports' ills—from player salaries to TV contracts to sweetheart stadium deals—on monopoly. And their solution is a radical one: Like a pair of trust-busting Teddy Roosevelts, the authors would have the Department of Justice ride into the fray and carve up each of the leagues into three or four separate entities."—Jonathan V. Last, Washington Times

"A significant contribution . . . The authors also provide a fascinating glimpse at the history of sports revenue issues . . . a readable, even chatty, dissection of our games from a valuable point of view."—Paul Chapin, Elysian Fields Quarterly

"An interesting look into the world of professional athletics. . . . [A] fresh perspective on an industry increasingly scrutinized and under fire."—Lane Hartill, The Christian Science Monitor

"A gem of clear analysis and argument. . . . [E]ssential reading for everyone."—Katherine A. Powers, The Boston Globe

"Hard Ball is attractive because it is a clearly and compellingly written book about a topic near and dear to the hearts of millions of Americans. It explains the fundamental economic causes of the nasty problems afflicting pro sports leagues in the waning days of the twentieth century. The audience is the smart fan who wants help in understanding why off-the-field problems so often overshadow the competition on the field."—Bruce K. Johnson, Centre College