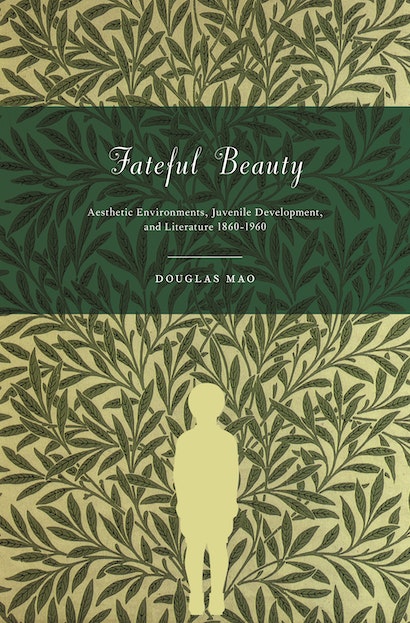 When Oscar Wilde said he had “seen wallpaper which must lead a boy brought up under its influence to a life of crime,” his joke played on an idea that has often been taken quite seriously — both in Wilde’s day and in our own. In Fateful Beauty, Douglas Mao recovers the lost intellectual, social, and literary history of the belief that the beauty — or ugliness — of the environment in which one is raised influences or even determines one’s fate. Weaving together readings in literature, psychology, biology, philosophy, education, child-rearing advice, and interior design, he shows how this idea abetted a dramatic rise in attention to environment in many discourses and in many practices affecting the lives of the young between the late nineteenth century and the middle of the twentieth. Through original and detailed analyses of Wilde, Walter Pater, James Joyce, Theodore Dreiser, Rebecca West, and W. H. Auden, Mao shows that English-language writing of the period was informed in crucial but previously unrecognized ways by the possibility that beautiful environments might produce better people. He also reveals how these writers shared concerns about environment, evolution, determinism, freedom, and beauty with scientists and social theorists such as Herbert Spencer, Hermann von Helmholtz, Ivan Petrovich Pavlov, and W.H.R. Rivers. In so doing, Mao challenges conventional views of the roles of beauty and the aesthetic in art and life during this time.

Douglas Mao is professor of English at the Johns Hopkins University. He is the author of Solid Objects: Modernism and the Test of Production (Princeton) and coeditor of Bad Modernisms.

"[Fateful Beauty] should broaden conceptions about the engineering of ethics in childhood and adolescence. Ideally, it will inspire scholars to look to less obvious sources than the discourse of development for how literature enables (and is enabled by) the construction of the morally treacherous preadult years."—Kirk Curnutt, Journal of American History

"The inexhaustibility of aesthetic environments—inattentions waiting to happen—admittedly is reflected in the exhaustiveness of Fateful Beauty's archive. Mao's local textual analyses are both animating and fastidious."—Michael D. Snediker, Modernism/Modernity

"[A]mong the many rich contributions of the book is the way it makes visible an intellectual genealogy for contemporary panic about childhood sexuality."—Kevin Ohi, Victorian Studies

"Mao's consideration of aesthetics as a significant aspect in literary naturalism allows for a refreshingly unique consideration of Dreiser along with such significant literary figures as James Joyce, Rebecca West, and W. H. Auden. As a result, he has made an important contribution to the field that will surely inspire deeper examinations in the coming years."—Michael Shaw, Studies in American Naturalism

"Douglas Mao's Fateful Beauty is a compelling work of intellectual, social, and literary history that reclaims aestheticism as a revolutionary social as well as artistic creed. This magisterial and groundbreaking work should emerge as a standard one on the period. Mao is a writer who commands attention and respect through his scrupulous research, careful arguments, and eloquence as a cultural and literary critic."—Maria DiBattista, Princeton University

"This book provides a really original take on the literature of the fin de siècle and high modernism, suggesting how central the imaginative labor of literary works was to the social, philosophical, and cultural traditions of the period. Mao works out his claims with a subtlety, depth, and range of reference that is deeply impressive. The book is written with unusual clarity, precision, and grace, adding to one's sense that it is the product of a major critic coming into his own. A splendid piece of work."—Jonathan Freedman, University of Michigan