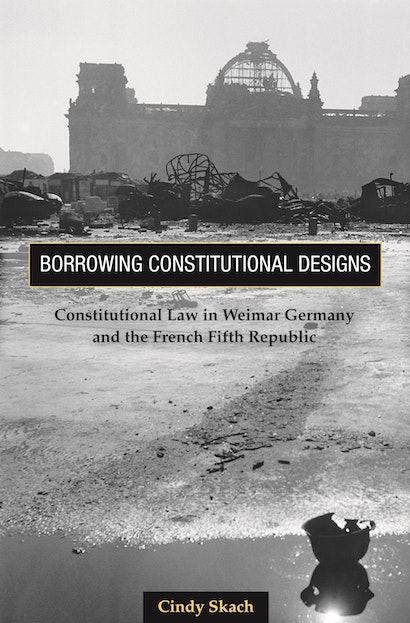 After the collapse of communism, some thirty countries scrambled to craft democratic constitutions. Surprisingly, the constitutional model they most often chose was neither the pure parliamentary model found in most of Western Europe at the time, nor the presidential model of the Americas. Rather, it was semi-presidentialism — a rare model known more generally as the “French type.” This constitutional model melded elements of pure presidentialism with those of pure parliamentarism. Specifically, semi-presidentialism combined a popularly elected head of state with a head of government responsible to a legislature.

Borrowing Constitutional Designs questions the hasty adoption of semi-presidentialism by new democracies. Drawing on rich case studies of two of the most important countries for European politics in the twentieth century — Weimar Germany and the French Fifth Republic — Cindy Skach offers the first theoretically focused, and historically grounded, analysis of semi-presidentialism and democracy. She demonstrates that constitutional choice matters, because under certain conditions, semi-presidentialism structures incentives that make democratic consolidation difficult or that actually contribute to democratic collapse. She offers a new theory of constitutional design, integrating insights from law and the social sciences. In doing so, Skach challenges both democratic theory and democratic practice. This book will be welcomed not only by scholars and practitioners of constitutional law but also by those in fields such as comparative politics, European politics and history, and international and public affairs.

Cindy Skach is Associate Professor of Government at Harvard University, where she is also Faculty Associate of the Minda de Gunzburg Center for European Studies, the Davis Center for Russian Studies, and the Weatherhead Center for International Affairs.

"Cindy Skach has produced a compelling and important book. Combining theoretical discussion with sustained historical analysis, Borrowing Constitutional Designs is a well-written and -executed example of the 'new institutionalism' that seems to have swept across the social sciences in recent years."—Amalia D. Kessler, Law and Politics Book Review

"Cindy Skach's book on Weimar Germany and the French Fifth Republic is a treasure trove of insights not only about the politics of these two countries, but also about the more general significance of constitutional design for the effective functioning of a political system. It brings to the fore the particular political system of 'semi-presidentialism' and offers cautionary analyses for those tempted to believe that it is the perfect 'third way' between parliamentarianism and presidentialism. It deserves wide readership among historians, political scientists, and legal academics."—Sanford Levinson, University of Texas Law School and Department of Government

"In Borrowing Constitutional Designs, Cindy Skach has crafted a very important book—one that could well become the defining interpretation of France's Fifth Republic in particular and of semi-presidentialism more generally. It will redefine how scholars and policymakers understand the operation of semi-presidential political systems. As Skach demonstrates, semi-presidentialism takes different forms, depending on the electoral context."—Jonah Levy, University of California, Berkeley, author of Tocqueville's Revenge

"Borrowing Constitutional Designs provides a skeptical new look at the French model of presidential government that is very influential throughout the world today. In placing it against the background of the Weimar experience with a similar form of government, this book makes a substantial contribution to our constitutional understanding."—Bruce Ackerman, Sterling Professor of Law and Political Science, Yale University

"This lucidly written book is a valuable addition to the literature on comparative politics. It advances discussions of governmental systems by defining and analyzing three types of semi-presidentialism. And it presents well chosen and professionally executed case studies of the French Fifth Republic and Weimar Germany. I learned a great deal from these."—Michael Laver, New York University, author of Representative Government in Modern Europe