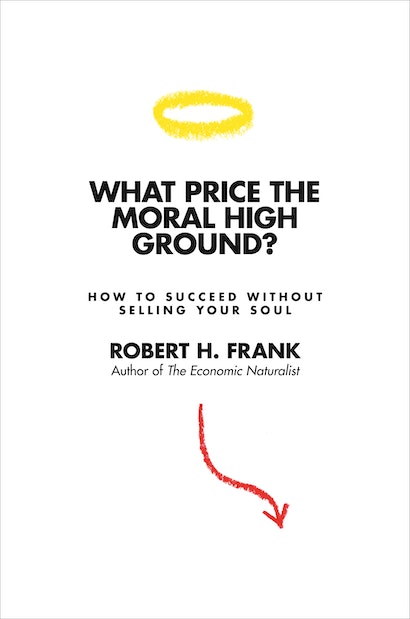 Financial disasters — and stories of the greedy bankers who precipitated them — seem to underscore the idea that self-interest will always trump concerns for the greater good. Indeed, this idea is supported by the prevailing theories in both economics and evolutionary biology. But is it valid?


In What Price the Moral High Ground?, economist and social critic Robert Frank challenges the notion that doing well is accomplished only at the expense of doing good. Frank explores exciting new work in economics, psychology, and biology to argue that honest individuals often succeed, even in highly competitive environments, because their commitment to principle makes them more attractive as trading partners.


Drawing on research he has conducted and published over the past decade, Frank challenges the familiar homo economicus stereotype by describing how people create bonds that sustain cooperation in one-shot prisoner’s dilemmas. He goes on to describe how people often choose modestly paid positions in the public and nonprofit sectors over comparable, higher-paying jobs in the for-profit sector; how studying economics appears to inhibit cooperation; how social norms often deter opportunistic behavior; how a given charitable organization manages to appeal to donors with seemingly incompatible motives; how concerns about status and fairness affect salaries in organizations; and how socially responsible firms often prosper despite the higher costs associated with their business practices.


Frank’s arguments have important implications for the conduct of leaders in private as well as public life. Tossing aside the model of the self-interested homo economicus, Frank provides a tool for understanding how to better structure organizations, public policies, and even our own lives.

Robert H. Frank is the Henrietta Johnson Louis Professor of Management and professor of economics at Cornell University, as well as an economics columnist for the New York Times. His books include The Winner-Take-All Society (with Philip Cook), What Price the Moral High Ground?, The Economic Naturalist, and Principles of Economics (with Ben Bernanke).

"This book is short, accessible and thought-provoking. . . . Frank draws heavily from game theory and evolutionary biology to explain why do-gooders work for less and firms that don't squeeze suppliers and cheat customers profit over the long run."—Washington Post

"Moral behavior is not irrational . . . Frank insists. The challenge is to define self-interest in a manner capacious enough to accommodate the real motives for people's choices. Frank does this with a mixture of Darwinian science, psychology, and flexible common sense."—Laura Secor, Boston Globe

"What Price the Moral High Ground? Is wide-ranging and well-written."—John J. DiIulio, Jr., The Weekly Standard

"[Frank's] vision is one that allows people to strive to meet their chosen goals and promotes the common good in an ordered cosmos—which is exactly where many of us want to live."—Merrill Matthews, Business Economics

"I loved this book. It makes sense of key economic behaviors not well explained by other models, through a combination of theory, examples, and clever experiments. Clearly written, it will be easily understood not only by economists but also noneconomists. Vintage Frank."—Shlomo Maital, author of Executive Economics

"Robert Frank takes us beyond the economic notion of rationality, pointing to the norms that guide people, their social status, and character, and make them seem nicer than economic theory would have them be. He adds an interesting twist to the story by showing that those who are subjected to theory may actually be less nice, less cooperative than others."—Arjo Klamer, editor of Conversations with Economists and The Value of Culture