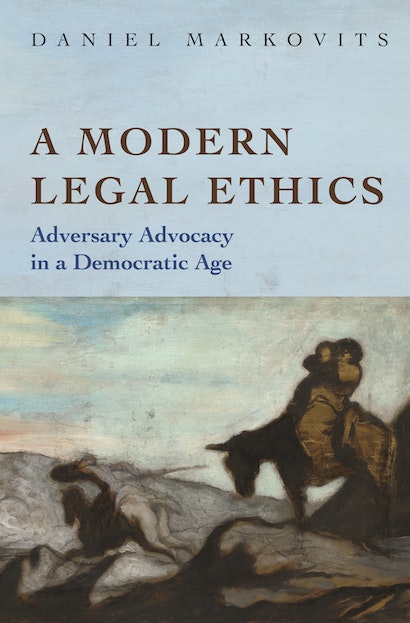 A Modern Legal Ethics proposes a wholesale renovation of legal ethics, one that contributes to ethical thought generally.


Daniel Markovits reinterprets the positive law governing lawyers to identify fidelity as its organizing ideal. Unlike ordinary loyalty, fidelity requires lawyers to repress their personal judgments concerning the truth and justice of their clients’ claims. Next, the book asks what it is like — not psychologically but ethically — to practice law subject to the self-effacement that fidelity demands. Fidelity requires lawyers to lie and to cheat on behalf of their clients. However, an ethically profound interest in integrity gives lawyers reason to resist this characterization of their conduct. Any legal ethics adequate to the complexity of lawyers’ lived experience must address the moral dilemmas immanent in this tension. The dominant approaches to legal ethics cannot. Finally, A Modern Legal Ethics reintegrates legal ethics into political philosophy in a fashion commensurate to lawyers’ central place in political practice. Lawyerly fidelity supports the authority of adjudication and thus the broader project of political legitimacy.


Throughout, the book rejects the casuistry that dominates contemporary applied ethics in favor of an interpretive method that may be mimicked in other areas. Moreover, because lawyers practice at the hinge of modern morals and politics, the book’s interpretive insights identify — in an unusually pure and intense form — the moral and political conditions of all modernity.

Daniel Markovits is the Guido Calabresi Professor of Law at Yale Law School.

"A Modern Legal Ethics is an intellectual whirlwind, sweeping from Aristotle and Kant to contemporary debates about impartial moral theory to the details of the Model Rules. . . . What is most engaging is the question that drives Markovits throughout: is it possible for an adversary advocate today to have integrity?"—Benjamin C. Zipursky, Yale Law Journal

"Markovits has given us in A Modern Legal Ethics a profound, provocative, and closely argued philosophical treatment of his subject."—Robert E. Rodes, Jr., American Journal of Jurisprudence

"In a refreshing break from the positivist battle over the moral function of lawyers in an adversary system of adjudication, A Modern Legal Ethics investigates whether it is even possible for lawyers to occupy an ethical role in modern society. . . . This unique perspective on the legal profession is informed by a combination of legal literature and political philosophy that is sure to capture the attention of academics and practicing lawyers alike."—Harvard Law Review

"Markovits' work is an intelligent and thorough investigation of the possibility for lawyers to escape the criticism that they are often serving injustice rather than justice."—Norbert Campagna, Ethical Perspectives

"In this complex and thought-provoking work, Markovits makes an original and substantial contribution to the field of professional legal ethics."—Tim Murphy, International Journal of Law in Context

"This book addresses both lawyers interested in moral theory and philosophers interested in what lawyers do. The author pulls off the remarkable feat of making law accessible to nonlawyers and philosophy accessible to nonphilosophers—without dumbing down either discourse. Scrupulous and balanced, this book is a real and substantial contribution to the field."—Brad Wendel, Cornell University

"A Modern Legal Ethics argues at a high level of philosophical sophistication and rigor, while at the same time being well-grounded in legal literature. This book may be the best philosophical defense there is of a distinctly lawyers' ethics."—Frederick Schauer, Harvard University