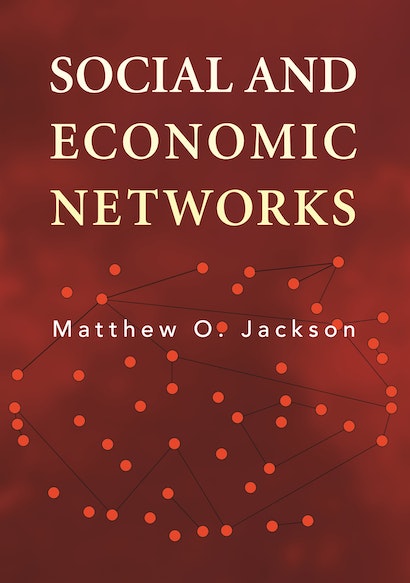 Networks of relationships help determine the careers that people choose, the jobs they obtain, the products they buy, and how they vote. The many aspects of our lives that are governed by social networks make it critical to understand how they impact behavior, which network structures are likely to emerge in a society, and why we organize ourselves as we do. In Social and Economic Networks, Matthew Jackson offers a comprehensive introduction to social and economic networks, drawing on the latest findings in economics, sociology, computer science, physics, and mathematics. He provides empirical background on networks and the regularities that they exhibit, and discusses random graph-based models and strategic models of network formation. He helps readers to understand behavior in networked societies, with a detailed analysis of learning and diffusion in networks, decision making by individuals who are influenced by their social neighbors, game theory and markets on networks, and a host of related subjects. Jackson also describes the varied statistical and modeling techniques used to analyze social networks. Each chapter includes exercises to aid students in their analysis of how networks function.


This book is an indispensable resource for students and researchers in economics, mathematics, physics, sociology, and business.

"Jackson's review of diffusion models is excellent, as tight an overview of these models as I have seen anywhere. . . . Social and Economic Networks is a must-read for all those steeped in the traditional social network analysis paradigm. Economists will find Jackson offers them a superb and accessible introduction to network questions and models. And for others from any social science background curious about social networks, I recommend a careful read of the book."—David Krackhardt, Science

"This book deserves the highest recommendations for all readers interested in networks and interdependence. It is written clearly, and could be used both as a starting textbook for a journey to the world of networks and also as an expert guide for scientists studying social and economic networks."—Károly Takács, Journal of Artificial Societies and Social Simulation

"I strongly recommend this book to any scholar or student interested in networks, not only in economics but in any connected field such as sociology, physics, and applied mathematics. Matthew Jackson's guided tour of the literature on economic and social networks is superb."—Joan de Martí Beltran, Regional Science and Urban Economics

"The study of networks is one of the liveliest and most interesting topics in contemporary economic theory. In this timely and beautifully written book, Matthew Jackson—a leading theorist and pioneer in network theory—lucidly lays out the elements of the theory as well as some cutting-edge research."—Eric S. Maskin, Nobel Laureate in Economics

"Matt Jackson has met and exceeded the challenge of producing a landmark work in a rapidly emerging and highly interdisciplinary field. It is wonderfully written, expertly balancing motivation and examples with technical detail. It should become a treasured resource for members of several research communities, including economists, sociologists, and computer scientists."—Michael Kearns, University of Pennsylvania

"Jackson does justice to the vast interdisciplinary field of complex systems by bringing together the key advances scattered in the social science, physics, mathematics, computer science, and economics literature. With its comprehensive exposition and numerous fascinating examples, this is a must-read for everybody interested in social and economic networks."—Albert-László Barabási, University of Notre Dame

"This book is an eye-opener. In addition to describing the new models of small-world and scale-free networks first developed by physical scientists, it also reveals the fascinating work done by economists on social networks. It is the best available textbook on network models, containing well-thought-out and demanding problems at the end of every chapter."—Phillip Bonacich, University of California, Los Angeles

"This is an excellent, incredible, and much-needed book. Every incoming graduate student who deals with networks in economics, political science, or sociology will want it as a reference. Social and Economic Networks will become the book in formal network analysis in the social sciences. Its clarity is unsurpassed, and perhaps even unsurpassable."—Scott E. Page, author of The Difference

"This is a wonderful book on social networks that will be immensely successful both as a reference on the state of the art and as a textbook for advanced courses. I believe that this book will spur renewed interest in social and economic networks, and serve as an inspiration for many researchers. Fascinating and very pleasant to read."—Francis Bloch, école Polytechnique