The year’s most memorable writing on mathematics 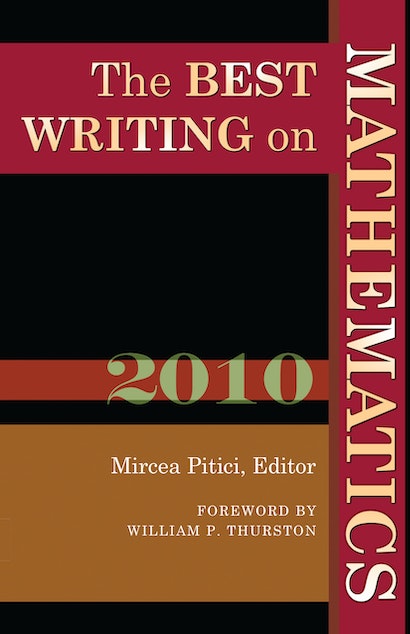 This anthology brings together the year’s finest writing on mathematics from around the world. Featuring promising new voices alongside some of the foremost names in mathematics, The Best Writing on Mathematics makes available to a wide audience many articles not easily found anywhere else—and you don’t need to be a mathematician to enjoy them. These writings offer surprising insights into the nature, meaning, and practice of mathematics today. They delve into the history, philosophy, teaching, and everyday occurrences of math, and take readers behind the scenes of today’s hottest mathematical debates. Here readers will discover why Freeman Dyson thinks some mathematicians are birds while others are frogs; why Keith Devlin believes there’s more to mathematics than proof; what Nick Paumgarten has to say about the timing patterns of New York City’s traffic lights (and why jaywalking is the most mathematically efficient way to cross Sixty-sixth Street); what Samuel Arbesman can tell us about the epidemiology of the undead in zombie flicks; and much, much more.

In addition to presenting the year’s most memorable writing on mathematics, this must-have anthology also includes a foreword by esteemed mathematician William Thurston and an informative introduction by Mircea Pitici. This book belongs on the shelf of anyone interested in where math has taken us—and where it’s headed.

Mircea Pitici holds a PhD mathematics education from Cornell University, where he teaches math and writing. He has edited The Best Writing on Mathematics since 2010.

"[Pitici] has put together a mathematics anthology gleaned from articles published in 2009 in a range of popular and scholarly sources. The collection is quite international in scope. . . . This collection is more than just a set of reprints; the assembly from diverse and, in some cases, not easily accessible publications and the arrangement add value to this work."—Library Journal

"Imagine for a moment that you had a friend who was a voracious reader of Math journals and periodicals. And, imagine that this friend had a knack for finding articles that were of interest to mathematicians and non-mathematicians alike by well-known writers and by new talent. Would you be interested in reading a few dozen of these articles? Mircea Pitici, editor of The Best Writing on Mathematics 2010 is such a friend, even if you've never met him. . . . A nice set of stimulating articles that appeal to a wide audience."—Sol Lederman, Wild About Math!

"As a mathematician engrossed in my own area . . . I've been delighted to have this book in my house. One inevitably will not agree with every choice of work for inclusion, but it would be a dull book if it simply presented us with what we like. What is important is that it is varied and balanced, and contains the odd surprise."—Charles Eaton, LMS Newsletter

"Mircea Pitici has succeeded in putting together a wonderful and varied bouquet of texts related to mathematics. . . . I highly recommend this book to everyone with an interest in mathematics, whether they are professional mathematician, graduate or undergraduate students, teachers, or enthusiastic amateurs."—Stephen Buckley, Irish Math Society Bulletin

"[The Best Writing on Mathematics 2014] contributors are a fascinating and diverse bunch. . . . [The] series should be lauded for Mercia Pitici‘s role as editor in not just selecting these essays but also their order and flow."—Robert Schaefer, New York Journal of Books

"I had thought that I kept up fairly well on mathematical publications of a general sort—that was until I looked at the rich variety of pieces included in this book, most of which were new to me. I found this collection overall very attractive."—Gerald L. Alexanderson, Santa Clara University

"A delight to read. This is a fine volume with lots of terrific articles that are as enticing as they are varied. The sum total is simply great."—Barry Mazur, Harvard University