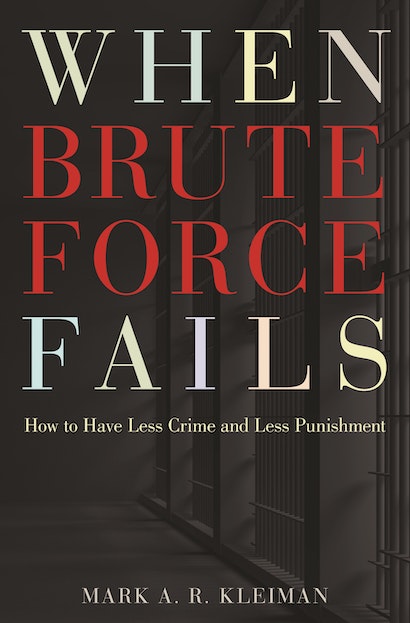 Since the crime explosion of the 1960s, the prison population in the United States has multiplied fivefold, to one prisoner for every hundred adults—a rate unprecedented in American history and unmatched anywhere in the world. Even as the prisoner head count continues to rise, crime has stopped falling, and poor people and minorities still bear the brunt of both crime and punishment. When Brute Force Fails explains how we got into the current trap and how we can get out of it: to cut both crime and the prison population in half within a decade.

Mark Kleiman demonstrates that simply locking up more people for lengthier terms is no longer a workable crime-control strategy. But, says Kleiman, there has been a revolution—largely unnoticed by the press—in controlling crime by means other than brute-force incarceration: substituting swiftness and certainty of punishment for randomized severity, concentrating enforcement resources rather than dispersing them, communicating specific threats of punishment to specific offenders, and enforcing probation and parole conditions to make community corrections a genuine alternative to incarceration. As Kleiman shows, “zero tolerance” is nonsense: there are always more offenses than there is punishment capacity. But, it is possible—and essential—to create focused zero tolerance, by clearly specifying the rules and then delivering the promised sanctions every time the rules are broken.

Brute-force crime control has been a costly mistake, both socially and financially. Now that we know how to do better, it would be immoral not to put that knowledge to work.

Mark A. R. Kleiman is professor of public policy at the University of California, Los Angeles. He is the author of Against Excess: Drug Policy for Results and Marijuana: Costs of Abuse, Costs of Control.

"One way to make apprehension and punishment more likely is to spend substantially more money on law enforcement. In a time of chronic budget shortfalls, however, that won't happen. But Mr. Kleiman suggests that smarter enforcement strategies can make existing budgets go further. The important step, he says, is to view enforcement as a dynamic game in which strategically chosen deterrence policies become self-reinforcing. . . . It is an ingenious idea that borrows from game theory and the economics of signaling behavior. . . . Revolutionary."—Robert H. Frank, New York Times

"Mass incarceration was a successful public-policy tourniquet. But now that we've stopped the bleeding, it can't be a permanent solution. . . . [I]t requires a more sophisticated crime-fighting approach—an emphasis, for instance, on making sentences swifter and more certain, even as we make them shorter; a system of performance metrics for prisons and their administrators; a more stringent approach to probation and parole. (When Brute Force Fails, by the U.C.L.A. law professor Mark Kleiman, is the best handbook for would-be reformers.)"—Ross Douthat, New York Times

"'Big cases make bad laws' is a criminological axiom, and one with which Mark A. R. Kleiman agrees, in When Brute Force Fails: How to Have Less Crime and Less Punishment. Kleiman blames big cases and bad laws for another distinctive feature of American life: 2.3 million people are currently behind bars in the United States. . . . At what point, Kleiman wonders, will incarceration be a greater social ill than crime? He proposes, for lesser offenders, punishments that are swift and certain but not necessarily severe: a night in jail, instead of a warning, for missing a meeting with a parole officer, say, and ten nights the next time."—Jill Lepore, New Yorker

"From Kennedy and Kleiman to Alm and Meares, the judges and scholars developing new deterrence strategies are changing the way we think about parole, probation, gang violence and drug markets."—Jeffrey Rosen, New York Times Magazine

"Mark Kleiman's new book, When Brute Force Fails, draws on the bedrock of economic logic—rational actors using incentives to make optimal decisions—to arrive at a sweeping overhaul of how we deter, punish and sentence. . . . Kleiman says we can have more effective deterrence by becoming more efficient in the use of resources to control crime. . . . Kleiman's theory of 'dynamic concentration' is the best example of economic logic used cautiously and innovatively to address a social problem. . . . If you want a no-nonsense guide to using incentives to build a better mousetrap, this is the book for you."—Sudhir Venkatesh, Forbes

"Absolutely buy this book and dedicate some time to it. . . . This is the most important social science book I've read in many years."—Reihan Salam, Bloggingheads.tv

"In . . . When Brute Force Fails, Kleiman argues that such capricious enforcement undermines efforts to reduce crime, and moreover that tough penalties—such as the long sentences that have contributed to clogged prisons—don't do much to help, despite their high cost. The alternative, Kleiman suggests, is a paradigm called 'swift and certain' justice, first proposed by Cesare Beccaria in the 18th century: immediate, automatic penalties—though not necessarily severe ones—doled out by credible, identifiable figures. . . . [I]t seems likely that the invasive surveillance model, combining tracking technology and the Kleiman/Alm paradigm of 'swift and certain' justice, could offer an alternative to much of the waste—in human as well as economic terms—of our current, dysfunctional system."—Graeme Wood, Atlantic

"Mark Kleiman, a professor of public policy at the University of California (Los Angeles), contend[s] that for violent as well as nonviolent offenders, long prison terms—which most potential criminals don't expect to incur—do less to deter crime than would swifter and surer imposition of less onerous penalties. Even probation, Kleiman writes, can be a real deterrent if accompanied by tough conditions and oversight. In his recent book, When Brute Force Fails: How to Have Less Crime and Less Punishment, Kleiman argues that the correct reforms would lead to 'half as much crime and half as many people behind bars 10 years from now.'"—Stuart Taylor Jr., National Journal

"Kleiman's recommendations appear to work. If they do, every community should be considering how to apply them. The current ways, the tough-sounding sentences, the random zero-tolerance, the throw 'em-in-jail-and-throw-away-the-key approach, feels right. But maybe it's wrong."—Royal Oak Daily Tribune

"[Kleiman] brings to his analysis a formidable array of statistics and case studies, which, fortunately for the reader, he uses to illuminate rather than overpower. . . . Having dissected the problem as he sees it, Kleiman offers in his final chapter a series of tips he believes will reduce both crime and the cost of correction and punishment. It is a trenchantly-stated starting point for reformers and fiscal conservatives alike."—Edward Morris, ForeWord Magazine

"Offenders are not 'rational actors' in the normal sense, explains UCLA professor Mark A.R. Kleiman in his book, When Brute Force Fails. Their cost-benefit calculations are skewed toward the immediate future, which means a delayed punishment won't feel tied to the offense. . . . Even [James Q.] Wilson, the godfather of 'tough on crime,' has endorsed Kleiman's book. 'This is very good. It's not quite as good as Einstein predicting the shift of light behind Mars . . . but it's a step in the right direction,' Wilson said while appearing alongside Kleiman on a panel at the American Enterprise Institute (AEI) in October."—Adam Serwer, American Prospect

"One of the most admired liberal policy books of the season, Mark Kleiman's When Brute Force Fails, argues for reconsidering current law enforcement policy."—David Frum, The Week

"This is very good. It's not quite as good as Einstein predicting light bending around the sun, . . . but it's a step in the right direction."—James Q. Wilson

"Absolutely buy this book. Dedicate some time to it. . . . This is the most important social science book I've read in many years."—Reihan Salam, New America Foundation

"For two decades, Mark Kleiman has tried to rescue community corrections from its own incompetence as well as from its critics. In When Brute Force Fails he extends his reach to develop a more sensible system of criminal justice. The book is imaginative, thorough, and readable. It will make a difference in public policy."—Peter Reuter, University of Maryland

"Mark Kleiman draws on a mixture of common sense, rationality, analysis, and individual case studies to develop clear policy recommendations about how to reduce crime while cutting costs. Policymakers, constrained by increasingly tight budgets, would be well advised to give serious consideration to his approaches and proposals."—Alfred Blumstein, Carnegie Mellon University

"Crime is costly. Punishment is costly. Mark Kleiman shows how, by being clever rather than vindictive, we can have much less of both than anyone thought possible. This book is the order of battle for a historic victory of intelligence over evil."—Michael O'Hare, University of California, Berkeley

"This is a terrific book on crime control, one that will inform experts and laypeople alike. Kleiman speaks about crime control with clarity and informed common sense."—Jim Leitzel, University of Chicago

"This book is destined to be a classic. There have been few new ideas for how to implement deterrence and this book is a fresh start at tackling the problem. It reads beautifully and is one of the most innovative and original contributions to the crime-control debate in a decade or more."—Robert J. MacCoun, University of California, Berkeley