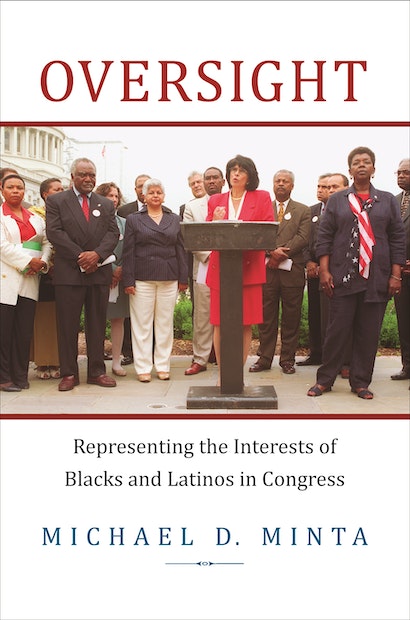 Oversight answers the question of whether black and Latino legislators better represent minority interests in Congress than white legislators, and it is the first book on the subject to focus on congressional oversight rather than roll-call voting. In this important book, Michael Minta demonstrates that minority lawmakers provide qualitatively better representation of black and Latino interests than their white counterparts. They are more likely to intervene in decision making by federal agencies by testifying in support of minority interests at congressional oversight hearings. Minority legislators write more letters urging agency officials to enforce civil rights policies, and spend significant time and effort advocating for solutions to problems that affect all racial and ethnic groups, such as poverty, inadequate health care, fair housing, and community development.


In Oversight, Minta argues that minority members of Congress act on behalf of broad minority interests — inside and outside their districts — because of a shared bond of experience and a sense of linked fate. He shows how the presence of black and Latino legislators in the committee room increases the chances that minority perspectives and concerns will be addressed in committee deliberations, and also how minority lawmakers are effective at countering negative stereotypes about minorities in policy debates on issues like affirmative action and affordable housing.

"This is the first study of racial representation in Congress to systematically examine committee behavior and oversight. This excellent book demonstrates the importance of descriptive representation by explaining how black and Latino legislators represent racial interests beyond simple roll-call voting and outside the borders of their districts through 'strategic group uplift."—David Canon, University of Wisconsin—Madison

"Wow, what a smart book! Minta expands our understanding of effective minority representation in an area of the policy process overlooked by scholars and pundits alike—implementation—where vigilance is rewarded and disinterest catastrophic. This is an important work."—Gary Segura, Stanford University

"Minta takes a major step in demonstrating that conclusions about the importance of descriptive representation, when based largely on roll-call data and other easily available indicators of policy representation, are often misleading. He makes a persuasive case for the critical role of black and Latino legislators in ensuring that government agencies are active in protecting civil rights and social welfare benefits for their own constituents and for minorities more broadly."—Bruce Oppenheimer, Vanderbilt University

"This is an important contribution to the literatures on race, congressional behavior, and legislative oversight. Understanding the politics of race and representation is essential to understanding American democracy, and Minta is well versed in the empirical research on the subject. Oversight addresses a fundamental topic in American politics, does so in a new manner, and provides new findings that will be of interest to many scholars."—Frank R. Baumgartner, University of North Carolina, Chapel Hill

"With its attention to congressional oversight of executive agencies, Oversight adds new and rich detail to existing literature on minority representation. This volume marks the first-ever book-length treatment of a relatively obscure and understudied—but substantively important—area of legislative activity. Minta brings fresh perspective to long-existing views and debates. This book is one that no serious scholar of minority representation can ignore."—Valeria Sinclair-Chapman, University of Rochester