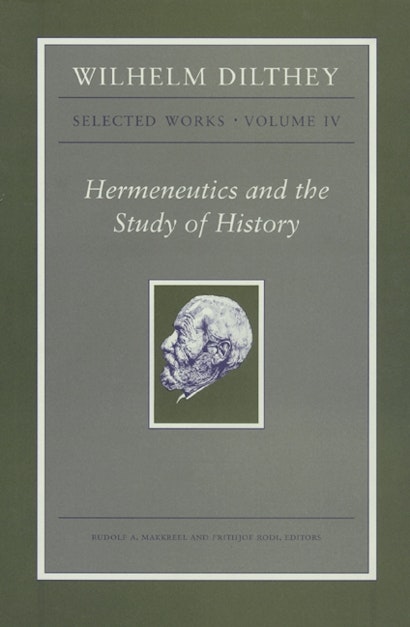 The philosopher and historian of culture Wilhelm Dilthey (1833-1911) has had a significant and continuing influence on twentieth-century Continental philosophy and in a broad range of scholarly disciplines. This volume is the third to be published in Princeton University Press’s projected six-volume series of his most important works. Part One makes available three of his works on hermeneutics and its history: “Schleiermacher’s Hermeneutical System in Relation to Earlier Protestant Hermeneutics” (The Prize Essay of 1860); “On Understanding and Hermeneutics” (1867-68), based on student lecture notes, and the “The Rise of Hermeneutics” (1900), which traces the history of hermeneutics back to Hellenistic Greece. All the addenda to this well-known essay are translated here, some for the first time. In them Dilthey articulates three philosophical aporias concerning hermeneutics and projects an ultimate convergence between understanding and explanation.


Part Two provides translations of review essays by Dilthey on Buckle’s use of statistical history and on Burckhardt’s cultural history; an essay “Friedrich Schlosser and the Problem of Universal History;” and a talk recalling his early years as a student of Boeckh, Jakob Grimm, Mommsen, Ranke, and Ritter. It also contains the important historical essay “The Eighteenth Century and the Historical World,” in which Dilthey reexamines the Enlightenment to show its significant contributions to the rise of historical consciousness.

Rudolf A. Makkreel is Charles Howard Candler Professor of Philosophy at Emory University and the author of Dilthey: Philosopher of the Human Studies (Princeton). Frithjof Rodi is Professor Emeritus of Philosophy at Ruhr-Universitat, Bochum, one of the editors of Dilthey's Gesammelte Schriften, and the editor of the Dilthey-Jahrbuch.