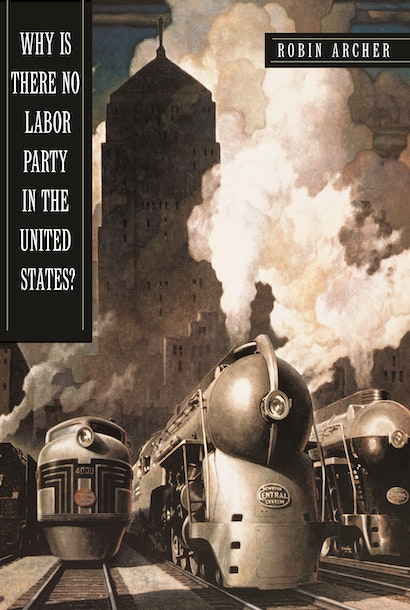 Why is the United States the only advanced capitalist country with no labor party? This question is one of the great enduring puzzles of American political development, and it lies at the heart of a fundamental debate about the nature of American society. Tackling this debate head-on, Robin Archer puts forward a new explanation for why there is no American labor party — an explanation that suggests that much of the conventional wisdom about “American exceptionalism” is untenable.


Conventional explanations rely on comparison with Europe. Archer challenges these explanations by comparing the United States with its most similar New World counterpart — Australia. This comparison is particularly revealing, not only because the United States and Australia share many fundamental historical, political, and social characteristics, but also because Australian unions established a labor party in the late nineteenth century, just when American unions, against a common backdrop of industrial defeat and depression, came closest to doing something similar.


Archer examines each of the factors that could help explain the American outcome, and his systematic comparison yields unexpected conclusions. He argues that prosperity, democracy, liberalism, and racial hostility often promoted the very changes they are said to have obstructed. And he shows that it was not these characteristics that left the United States without a labor party, but, rather, the powerful impact of repression, religion, and political sectarianism.

Robin Archer is director of the postgraduate program in political sociology at the London School of Economics and Political Science. He was previously the fellow in politics at Corpus Christi College, University of Oxford.

"In an intriguing and elegant exposition of comparative history, Archer uses the labour politics of the 1890s in both countries to illustrate the similarities and the differences between the two societies . . . the innovative quality of Archer's approach, together with the clarity of its exposition, will unsettle established opinions and rejuvenate what has been a venerable debate into an altogether fresher controversy."—Michael Foley, Times Higher Education

"Most conventional explanations have relied on comparisons with Europe. Such analyses tend to highlight factors like levels of relative prosperity, early suffrage, racial hostility, and commitment to social-egalitarian values...[Archer] proposes that the more useful comparison is between the United States and Australia, which did establish a labor party in 1891. By contrasting those two New World countries, Archer reveals that the most widely accepted causes are not in fact responsible, and that they often had effects that were the opposite of those that are usually ascribed to them."—Evan Goldstein, Chronicle of Higher Education

"It seemed everything had been said about this enduring question of US history, a deceptively simple question that goes to the heart of whether or not the US can reflect on an 'exceptional' history, different from Europe's. Sociologist Archer has revisited this topic, and through extensive research has persuasively overturned conventional explanations for the absence of a US labor party. . . . This new book will engage students and scholars by showcasing the potency of thoughtful comparative history."—T. Goyens, Choice

"This is a book of great scholarship and painstaking research."—Jeff Shaw, Sydney Morning Herald

"It's an old question, but despite the academic fashion of dismissing it, it's a question that returns in both academic and political guise with some regularity. Robin Archer of the London School of Economics gives some new answers."—Kim Moody, International Socialism

"Robin Archer has done a marvelous job of revisiting an old mysterious nugget of considerable frustration to scholars and students alike of American labor studies. . . . Archer's book makes an insightful contribution to the literature in this field as well as challenges scholar, teacher, and student alike to reexamine the reasons why America has never birthed a genuinely worker-based party. The text would be equally valuable in a labor history or political history class."—Bob Bruno, Labor Studies Journal

"The books makes a valuable contribution to debates on U.S. exceptionalism. More generally, it demonstrates the strengths of comparative history. . . . [T]he depth and scope of argument are impressive."—Michael Huberman, Industrial and Labor Relations Review

"Archer's argument is extremely successful, well presented and supported by a wealth of primary and secondary research."—Raymond Markey, British Journal of Industrial Relations

"Archer's account is a persuasive one, all the more forceful for its clear writing and organization, and for the detailed factual illustrations and occasional counter-examples that support its theoretical claims. . . . Archer's . . . findings will certainly push us to re-examine American labour's present, as well as its past."—Gay W. Seidman, British Journal of Sociology

"Every so often a book emerges to challenge old assumptions, and Robin Archer's thoughtful new study does this admirably, offering radically new answers to the US labor party puzzle. In the process, Archer invites us to take a fresh look at American 'exceptionalism' as a whole."—John Tully, Labour History

"In this volume, Archer poses the most novel and thought-provoking answer ventured in many years to one of American political history's most enduring questions. Archer takes an unusual approach to the subject, offering a comparative history of labor and politics in the United States and Australia as a means to tease out the key points that allowed Austrailians to form a labor party while Americans did not. The study is meticulous in its construction, and deeply informed on both the Australian and American contexts."—Joseph A. McCartin, Journal of Social History

"Robin Archer's Why Is There No Labor Party in the United States? is the most comprehensive, acute, and original exploration of 'American exceptionalism' to appear in many years. Archer boldly and rigorously argues that repression, religion, and socialist sectarianism shaped the politics of American labor far more than did the usual suspects—affluence, liberalism, democracy, and racial divides. Anyone interested in understanding the distinctive character of American politics during its industrial age will have to wrestle with this provocative and important book."—Gary Gerstle, Vanderbilt University

"This is a profound and searching study based on primary research that applies an entirely new perspective to the intriguing absence of an American labor party. Archer employs a comparative historical method with great ingenuity—matching up the United States with a 'most similar' case, that of Australia. He leaves virtually no stone unturned in his search for an answer, taking the reader on a fascinating journey that creatively integrates the politics of unions, ideological analysis, race, religion, and institutional design. A must for historians, sociologists, and political theorists."—Michael Freeden, University of Oxford

"Robin Archer's Why Is There No Labor Party in the United States? is a splendid demonstration of the power of comparative history. Closely reasoned and extensively researched, it turns some of the oldest and most influential clichés about American politics on their head."—Daniel Rodgers, Princeton University

"Archer has some extremely important things to say about the U.S. experience based on his comparison of U.S. and Australian labor history. Indeed, he turns the conventional understandings of 'American exceptionalism' upside down, and, in doing so, he will make historians and social scientists reexamine and reinterpret the American past."—Melvyn Dubofsky, Binghamton University, SUNY