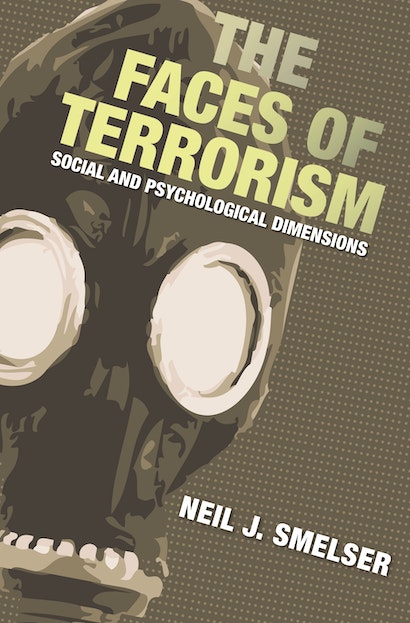 Terrorism is the most clear and present danger we confront today, yet no phenomenon is more poorly understood by policymakers, the media, and the general public. The Faces of Terrorism is the first serious interdisciplinary examination of terrorism in all its facets. What gives rise to it, who are its proponents and how do they think, and how — and why — does it work?


Neil Smelser begins by tackling the fundamental problem of defining what exactly terrorism is. He shows why a precise definition has eluded us until now, and he proposes one that takes into account the full complexities of this unconventional and politically charged brand of violence. He explores the root causes and conditions of terrorism, and examines the ideologies that inspire and fuel it throughout the world. Smelser looks closely at the terrorists themselves — their recruitment, their motivations, the groups they form, their intended audiences, and their uses of the media in pursuing their agendas. He studies the target societies as well, unraveling the complicated social and psychological impacts of having to cope with the ever-present threat of a terrorist strike — and responding when one occurs. He explains what it means to live under constant threat of terrorism, and addresses the thorny domestic and foreign policy challenges this poses. Throughout, Smelser draws from the latest findings in sociology, political science, anthropology, economics, psychology, psychiatry, and history.

The Faces of Terrorism provides the breadth of scope necessary to understand — and ultimately eliminate — this most pressing global threat.

Neil J. Smelser is university professor of sociology emeritus at the University of California, Berkeley. His many books include Social Change in the Industrial Revolution, Problematics of Sociology, and Social Paralysis and Social Change.

"Neil J. Smelser's The Faces of Terrorism is a well-reasoned and comprehensive discussion about terrorism and counterterrorism...Smelser also discusses the factors contributing to the decline of terrorist groups, the dependence by terrorist groups on constant publicity, measures that are effective in countering terrorism and the impact of terrorism on a targeted society."—Joshua Sinai, Washington Times

"[The Faces of Terrorism is a] comprehensive and readable look at the nature of terrorism. Smelser's book is comprehensive — and disturbing. He demonstrates both the complexity of terrorism and the simplistic nature of our leaders' view of it. At the core of his argument is the contention that suppressing minorities gives rise to ideologies that see violence as the only means of redressing grievances. Smelser laments the simplistic, jingoistic response to the problem—one abetted, he says, by media that should know better."—Bob Braun, Newark Star-Ledger

"Smelser, a leading social scientist, turns his attention to the topic [of terrorism] with valuable results. After 9/11...he took the view that social scientists ought to offer fresh approaches that sidestep partisan politician debates. The resulting book is valuable not only because of Smelser's shrewd judgments but also because he draws on such a wide literature. A couple of nice touches are his use of personal experiences to illuminate key issues and his identification of a number of 'entrapments,' apparently intractable debates in which analysis can get snarled up—for example, the debate over the tradeoffs between fighting terrorism and protecting civil liberties."—Lawrence D. Freedman, Foreign Affairs

"Smelser focuses on the real core of [terrorism]: it reveals the multifaceted psychology of the actors and victims of terrorist activities. It is an excellent book, a real must-read for anyone interested in the subject."—Waldemar Hanasz, Metapsychology

"World-renowned sociologist and expert on terrorist violence Smelser offers an interdisciplinary approach to understanding the causes and conditions of terrorism, its perpetrators, their motives and operational strategies, and policy responses. He synthesizes behavioral and social science research and builds general explanations of unconventional violence. In particular, chapters on the causes and conditions of terrorism, its ideological bases, and motivational factors give the book a thoroughness that makes it an unrivaled study in the field. . . . Written in highly accessible language for both general and specialized audiences."—T. Niazi, University of Wisconsin, for, Choice

"[This] book presents an invaluable and unique contribution to the understanding of terrorism and its outcomes. . . . [It] should become essential reading for students of terrorism. . . . Smelser's observations contribute significantly to a debate that has accompanied the study of terrorism since it first emerged."—Ami Pedahzur, Perspectives on Politics

"Well argued and with such broad appeal, Smelser's contribution to understanding terrorism is important, complete and required reading for anyone examining the issue that, ten years after 9/11, remains at the top of the international political agenda."—Dylan Kissane, Journal of Global Analysis

"The Faces of Terrorism provides the breadth of scope necessary to understand and ultimately eliminate this most pressing global threat."—World Book Industry

"This is a fine book, remarkably broad and encompassing in its sweep. One of its most important arguments—that social scientists are underrepresented in policy approaches to countering terrorism—is absolutely correct."—Jerrold M. Post, editor of The Psychological Assessment of Political Leaders

"This is an excellent book. The topic is of great importance and the treatment of it will interest both academics and the public. Smelser effectively draws on his long and distinguished career to bring in diverse perspectives and literatures."—Robert Jervis, Columbia University

"Highly accessible and engaging. This book is rich in insights and gives the reader a deep appreciation of the manifold phenomena involved in terrorism and the responses to terrorism on levels of the individual, the state, and the international community."—Arie W. Kruglanski, University of Maryland

"This book, by one of the world's most renowned and thoughtful social scientists, seeks to demystify and illuminate our understanding of terrorism by bringing to bear on it relevant theoretical and empirical work in the behavioral and social sciences. It suggests that a thoroughgoing understanding of terrorism requires consideration not only of its causes and participatory dimensions but also of the target societies and their responses, and the role of the media in the process."—David A. Snow, University of California, Irvine