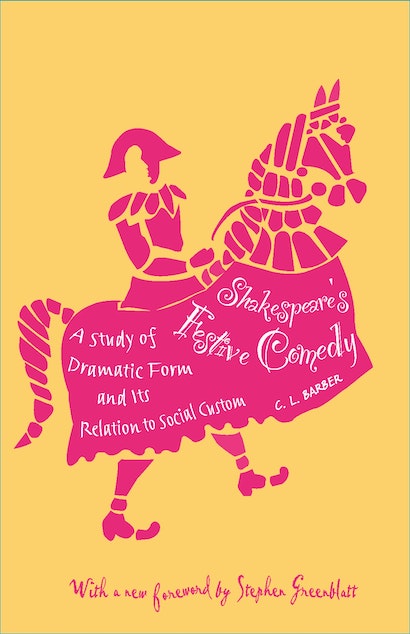 In this classic work, acclaimed Shakespeare critic C. L. Barber argues that Elizabethan seasonal festivals such as May Day and Twelfth Night are the key to understanding Shakespeare’s comedies. Brilliantly interweaving anthropology, social history, and literary criticism, Barber traces the inward journey — psychological, bodily, spiritual — of the comedies: from confusion, raucous laughter, aching desire, and aggression, to harmony. Revealing the interplay between social custom and dramatic form, the book shows how the Elizabethan antithesis between everyday and holiday comes to life in the comedies’ combination of seriousness and levity.


“I have been led into an exploration of the way the social form of Elizabethan holidays contributed to the dramatic form of festive comedy. To relate this drama to holiday has proved to be the most effective way to describe its character. And this historical interplay between social and artistic form has an interest of its own: we can see here, with more clarity of outline and detail than is usually possible, how art develops underlying configurations in the social life of a culture.” — C. L. Barber, in the Introduction


This new edition includes a foreword by Stephen Greenblatt, who discusses Barber’s influence on later scholars and the recent critical disagreements that Barber has inspired, showing that Shakespeare’s Festive Comedy is as vital today as when it was originally published.

C. L. Barber was a fellow of the Folger Shakespeare Library and a world-renowned Shakespeare scholar. His books include The Whole Journey: Shakespeare's Power of Development and Creating Elizabethan Tragedy: The Theater of Marlowe and Kyd.

"Shakespeare's Festive Comedy is the best book on the subject that I know. The book is well and clearly written, and I should think would fascinate the general readers. I think it is indispensable for students of Shakespeare's comedy."—Francis Fergusson

"I can think of no other book that has had such a powerful influence on the ways in which Shakespeare has been taught over the past thirty years. Shakespeare's Festive Comedy was a book ahead of its time. Barber revolutionized the ways that Shakespeareans thought of comedy in relation to its social setting—especially festive comedy. Others have built on his argument but nobody has really improved on his keen, central insight."—James Shapiro, Columbia University

"C. L. Barber is the most compelling of the anthropological critics and his book, Shakespeare's Festive Comedy, is to my mind far and away the most illuminating yet to appear on its subject. He is compelling for many reasons—a mind both intricate and deft, a sensitivity quick to the accommodation of esthetic form to the intricacies of psychological function, a humanity benignly tolerant and inclusive. . . . The especial merit of Barber's criticism lies in its sensitive exploration of the individual working out of the release-clarification formula in five separate plays. Each, he discovers, 'tends to focus on a particular kind of folly that is released along with love—witty masquerade in Love's Labour's Lost, delusive fantasy in A Midsummer Night's Dream, romance in As You Like It, and in The Merchant of Venice, prodigality balanced against usuary.' Twelfth Night, to complete the list, focuses on misrule and its complementary folly of time-serving."—Arthur M. Eastman, in A Short History of Shakespearean Criticism